The Oddities of Nature... Weird and Wonderful 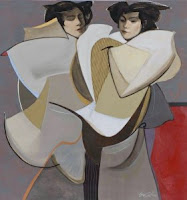 Many of the wonders and oddities of nature have always fascinated me. One of the most amazing of these oddities is the human chimera. In simple terms, a human chimera is two people in one body. A good example of a chimera was a woman named Karen who was undergoing genetic testing for a kidney transplant.  The tests were conducted on her, her husband, and her three grown children. The results of the tests revealed that two of her three children were not her biological children, although she had given birth to them, and they were not the result of egg donors. After several months of further testing, it was discovered that the DNA from Karen's cheek was different from the DNA in other parts of her body. Karen was a human chimera and her body contained the genetic makeup of two distinct human beings. Chimerism happens with the fusing of two fraternal zygotes in the womb, and results in a person with more than one genetic identity. This happens very early in embryonic development, before stem cells have developed into various organs. People with one blue eye and one brown eye, for instance, may be an example of chimerism. Any of us may be a chimera, and unless we had some reason for DNA testing, we would never know. If you should happen to glance at a stranger looking back at you from the bathroom mirror, is it really you?

Another fascinating oddity of nature is the Anatolian shepherd dog. Anatolian shepherd dogs have been guarding sheep for thousands of years, and they have evolved with coloring to resemble the sheep they are protecting.  You can see in this photograph there are two Anatolian shepherd pups standing next to the sheep.  To a natural predator of sheep, this would be confusing.  From a distance it is very difficult to spot the dog, and just as difficult for a predator to plan an attack. The dogs would be able to hide in plain sight, and they are accepted by the flock as one of them. 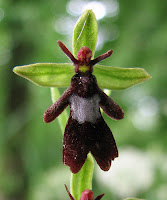 One of the most incredible oddities of nature is Ophrys insectifera -- the fly orchid. It has evolved not only to resemble a fly, but it uses scent and female fly sexual pheromones to attract male flies, which pollinate the flowers as they attempt to mate with the fly on the orchid. There is also a Ophrys apifera, which is a bee orchid, and the insect on it looks exactly like a little, round, fat bumble bee.  These orchids require flies and bees in order to pollinate, so what better way than to entice them by using live bait?  Can you think of anything more amazing?

Nature is full of weird and wonderful things.  These are just three of them.
Posted by Jo at 7:31 PM

Oh my, it's wild kingdom night!! This is so fascinating...I've heard of the first one but the others are new to me. Oh my gosh, can you imagine how many of these types of things go on around us all the time?? Nature...wow.

Love hearing about things like this...thanks for the wild kingdom night info...

Very interesting post! I did not know about the human chimera. That is incredible! Also loved your sunset photo, in your previous post! I could never forget about you, Jo! :) Cheers, cher!

I am soooooo disappointed. In reading this blog's titled, I thought for sure it was going to be a tribute to moi. LOL!

(All kidding aside, this was a mighty fine read! Thanks, Jo!

Fascinating stuff Jo - we learn so much every day don't we?

What an interesting post! I read it to my hubs, and he agreed.

I think we got the problem fixed with my blog. Thanks for visiting!

Maybe this explains it! Then again, maybe not!

Thanks for the fascinating, informative post. It is all new to me. Haven't heard about that before. Now, when I come to think about it, I've got one blue eye and one green eye , mmm...

I had never heard of the fly and buble bee flowers before. How amazing. The world is a wonder.

The chimera thing certainly explains governments...or is that schizophrenia?

Now, see, if you were a chimeric criminal, that could be handy thing with DNA evidence.
I'd never heard of it before and it's fascinating.

That is one strange flower. I have never heard of it before now.

Indeed, Nature is beautiful, but she can also be brutal. She is varied, diverse and so interesting. This was a fascinating read, Jo, than you for sharing these wonderful oddities of Nature. I had never heard of chimerism before, and the story of Karen sent shivers down my spine!

I have never heard about the orchids, or the "sheep" dogs. I had heard of chimerism before, but it's amazing to read it again. Nature is indeed beyond understanding. I am still astounded by the fly orchid!

Aha! Maybe that explains Bagman and Butler who seem to inhabit me -- my mind at least. Or maybe that is schizophrenia.

Very interesting! I did know a little girl who had one brown eye and one blue eye, and we did have a white cat with a blue and brown eye. I never knew the reason though. Thanks for sharing the info.

(You write about the most fascinating things!)

I'm fond of the little dogs who resemble the sheep - we used to raise sheep, and used several sheep-dogs, but none were this cute (no doubt, not this breed).

Anything about nature interests me, except the unpleasant nature of people and the animal kingdom (of which we're a part of). That part, only makes me sad.

wow. you write about the most interesting
subjects. i loved the sheepdog photo.

they say that many couples begin to resemble
each other. i wonder what that is called?

Thank you for teaching me something I did not know before. Please have a great start into the new week and month as well.

Nature is indeed strange and wonderfull! This explains my blue-eyed friend with brown pie slices in both eyes whose hair is curly on one side and nearly straight on the other.

Fascinating! I thought chimera were mythological beings. Now, I am not so sure.

Hi Jo, Very interesting. My husband always says that he feels like he should been one of a twin. Maybe he's both of the twins in one - a chimera. Loved your photo of sunset.

Does being a chimera affect one's life in any way, other than knowing you have strange genes?

Fascinating! I don't think I knew any of that.