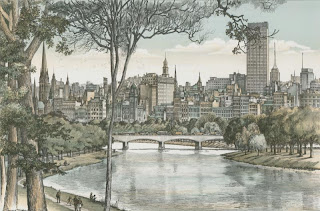 Once upon a time people lived in cities, and everything they needed was at their fingertips -- the butcher, the baker, the candlestick maker.  Dwellings were built around the city square, and folks could walk everywhere.  The outlying districts were agricultural or industrial, and all goods and products were transported to the cities where people could purchase them.  Cities were beautiful places with user-friendly architecture, parks, playgrounds and access to rivers, lakes and ocean fronts.  Landscape architects were hired to design beautiful inner-city parks such as Hyde Park in London, and Central Park in New York City.  The parks contained bandstands, lakes for rowing, ice cream parlours, carousels and playgrounds for the children, and on weekends folks took picnic baskets to the park and spent the afternoon there.  In the winter they skated on the frozen ponds.  Living in the city was a lovely way of life. 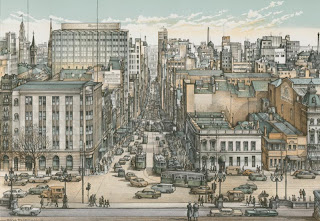 And then, in the late 1940s after the Second World War, something happened. The first "suburb" was designed. It was called "Levittown" after it's developer William Jaird Levitt and it consisted of 17,544 Cape Cod and ranch houses. It was built to give post-World War II GIs the keys to their American Dream. It was "whites only", and in truth it was the beginning of the end of the American Dream. The amenities of the city were no longer in reach, and people needed cars for transportation. Inner cities began to be razed, and highways, freeways and unsightly parkades began springing up where there had once been shops, businesses and thriving communities. The inner cities were now only for minorities and folks who could not afford the "American Dream home" out there in the suburbs. And people began to rely on their automobiles. In fact, life without an automobile was practically unheard of.  People now lived where there once had been farmland, and they needed their automobiles to drive miles and miles in order to get to the butcher, the baker and the candlestick maker.  Life began to evolve around the automobile, and people no longer owned cars, their cars owned them.  The automobile that had once been a luxury had now become a necessity and was the main focus of city development in every country of the world.  City planners developed cities around automobiles, not around people. 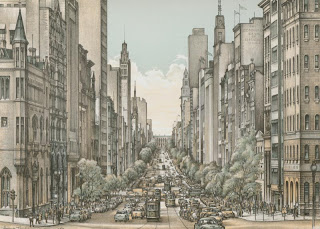 Fast forward to 2012. In 1900 there were somewhere between 4,142 and 8,000 passenger cars in the United States (the only country to manufacture cars at that time). It is estimated there are now somewhere around 1.015 billion vehicles in the world, and they burn over 400 billion gallons of gasoline and diesel fuel yearly, and that is a conservative estimate. There are over 250 million vehicles in the United States alone.  And why?  Because development has made it more difficult to get from A to B, and folks need a car to do so.  If you were a visitor from another planet and you witnessed this, what would be your first impression?  Stupid humans to do this to their home?  Yes.  Stupid humans.  And it's going to take a disaster of major proportions to undo it, however, there probably will not be anything like that happening in the foreseeable future. We're stuck with what we have done to our beautiful, fragile, blue planet.  We have blighted our beautiful cities, and we have blighted our beautiful agricultural land.

I'm one of the few people I know who has never owned or driven a car, and I do not possess a driver's license.  I have always found public transit -- buses or trains/subways -- to be a perfectly acceptable means to get from A to B.  And it's cheap.  At one time most cities in the world had street cars, and when automobiles took over, street car lines were ripped up.  Transportation authorities are now realizing that was a mistake, and should never have happened.  Now, in the 21st Century when cars are destroying our planet, we need to find a way to look into the future and find cleaners ways of transportation, perhaps by looking to the past.  Once upon a time, the earth was not controlled by cars.

The auto industry had a pretty powerful lobby to destroy as much of public transportation as possible in order to 'convince' people to buy their cars.
They have a lot to answer for, but I don't think they care all that much.

My sister just bought a house a Levittown... I wonder if she knows this..

My sister just bought a house a Levittown... I wonder if she knows this..

I would love to be able to get around without a car. In Seattle, many people use bicycles. But in my suburb, the hills make that very difficult.

However, it was also a way for those who couldn't afford it, a house of their own. I remember my mother going to work and my grandparents babysitting us so they could save a down payment. Such was life and such is life nowadays. I do know one other person who has never driven or owned a car. You're not alone there, but you are a rarity.

I wish I could use public transportation, but there is none available in our whole county.

I dislike cars immensely. Have to have one though!
About 8 years ago our one and only bus from Mellerstain to Kelso was withdrawn. Not used enough.
This bus used to arrive at noon, once a day (Mon to Fri) and return at 2 p.m.
So one either had to get a car or hire a taxi. No other choice really.
However, the main problem is simply people! Too many of 'em. And growing fast.
We're doomed .. DOOMED ... DOOMED!!

On a brighter note, I heard on NPR recently that people are moving back into St. Louis, Detroit, and many other previously abandoned cities because they crave the urban lifestyle. The real estate developers can't rehab properties fast enough for all the people who want to rent there. Apparently buying isn't part of the equation.

A very interesting post! Levittown is on Long Island, where I grew up, but in a different town. It was considered ugly by those who didn't live there. People made jokes about Levittown dwellers not being able to find their own homes because they all looked alike.

You could try using a microcar - no driving licence required, only knowledge of the traffic rules. And it's less air polluting (so they say).

My cousin has also never owned a car, but he does have a license so that he can rent a car for the few times he needs to.. I think those times are few and far between.

My friend and I were talking this morning about a documentary that discussed how we may very likely be extinct in another century and a half because governments truly do NOT take the environmental damage seriously. And they do not truly care about the generations to come, except when they talk about money.

This sociology history highlights so much about the states that appalls and saddens me. I try to find ways to combine trips more and more, not just so I do not have to PAY for gas, but so that I do not BURN it. And it is beyond difficult in the suburbs. Apartment life helps, though.

That is something we talked about. Living in an apartment is more energy efficient than a house. Just having other dwellings on two walls! And my apartment is within a mile of several stores that offer necessities. I am learning to conserve and to make do, more like a downtown or city dweller, now that I do not have my acre in the burbs, on a cul de sac in the land of malls.