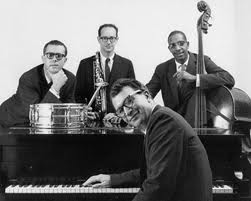 The first time I heard Take Five by Dave Brubeck, I was transported to another place far away from the Vancouver Island town where I grew up. I was transported to the land of cool, and I never wanted to leave that place. Ever. The magical combination of Dave Brubeck on piano, Paul Desmond on saxophone, Joe Morello on drums and Eugene Wright on bass was, to me, the purest sound I had ever heard. While all my friends were listening to rock 'n roll, I was listening to Dave Brubeck, Cal Tjader, Charlie Mingus, Miles Davis, Chet Baker, John Coltrane, Thelonious Monk, Gerry Mulligan, and so many more.  What music these guys made.

Dave Brubeck died of heart failure today, in Norwalk, Connecticut, one day before his 92nd birthday. The birthday party that was planned for him tomorrow has been turned into a memorial instead.

The Golden Age of Jazz is just a memory, but its discovery will stay fresh until the day we die. The music is in our bones.

A true classic.
Sad to learn of his passing but his music will live on. Immortal.

I seriously don't think you ever left that land of cool Jo.

My musical interest was also shocked into existence by Dave Brubeck and his music. I too posted on his passing and on his music today.

I remember my mum playing it when I was little and loving it. The cover brings back good memories too.

Excellent obit in today's SF Chronicle. (http://www.sfgate.com/music/article/Dave-Brubeck-jazz-giant-dies-at-91-4094460.php) . Stuff I didn't know: Dave Brubeck was born in Concord in the East Bay, was the first modern jazz musician to make the cover of Time, and cancelled appearances where band members were unwelcome because of their race. I hadn't listened to "Take Five" for a couple of years; now I can't get it out of my head. RIP.

I saw him perform live in NYC when I was in my late teens and early 20s. The energy in that room (Birdland) was electric and magical.

A true great! How fortunate that we have his recordings.