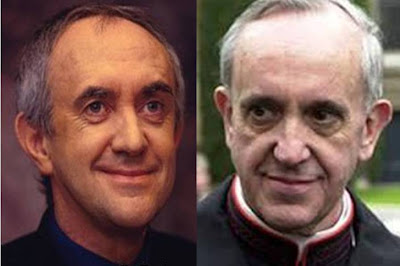 It has occurred to me recently, that I really do need to get a life.  Seriously.  I have way too much time on my hands.  Yesterday evening I was watching a Jonathan Pryce movie -- he is one of my favourite actors -- and I realized that he looks exactly like the fellow who was just elected as Pope.  Faces fascinate me.  Mythology says that we all have a doppelgänger somewhere.  Some folks have glimpsed their own doppelgänger, but science has explained this as an epileptic seizure of the left temporal lobe.

Not long after my mother passed away, I saw her doppelgänger in the produce department of our local supermarket.  It was strangely comforting, and I followed her around for about 15 minutes, trying not to look obvious.  Everything about the woman was identical to my mother, including her mannerisms.  It was a surreal experience.  I shopped at the same supermarket for months afterwards, and never saw her again.

Do you have a doppelgänger?  You never know.
Posted by Jo at 8:59 AM

Jo, they do lookk WAAAAAY alike. Now we know who they should get to play the part of Pope Francis.

Very astute observation here Jo...they do look very much alike. I have never seen anyone who looks like me, other than similarities within our family... I have had people meet me and tell me they know they have met me before, but rarely are able to say where...several times people have asked me if I have a twin, which I do not.

I wish that you had spoken to that woman who looked like your mother and gotten maybe some information from her — some vital statistics. What if she were to have been born on the same day as your mom? That would have been a chiller.

They look so alike. Pryce is one of my favourites, too. I just love that voice ...