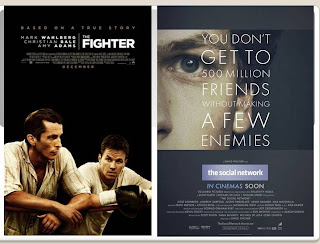 What am I missing? I watched both the "The Fighter" and "The Social Network" twice, just to be sure I wasn't missing something, and I didn't care for either of them – the first time or the second time. I really, really wanted to like them, but I didn't like them at all.  Oh, I can hear you all gasping now... I am stymied. Can someone please explain them to me? They are both biographical stories of young men in their 20s, and they were both disjointed and erratic. There have been a few good boxing movies that I have enjoyed, "Raging Bull" and "Rocky" just to name a couple. Those were good movies, and if you haven't seen them – watch them. Interestingly, Roger Ebert didn't care for "The Fighter" either, saying, "Because we aren't deeply invested in Micky, we don't care as much as we should, and the film ends on a note that should be triumph but feels more like simple conclusion." Another critic said: "Whenever it should bounce backward, it lunges forward; it jabs instead of feints, and stomps down hard when it needs to dance." That was how I felt about the movie as well.

One of the best movies this past Oscar season was "Winter's Bone" and I would be surprised if anyone has seen it. It was nominated for Best Picture, and in my opinion it came a close second to "The King's Speech".

I'm a movie buff, and I have enjoyed watching good movies all my life. The Turner Classic Movie channel plays the old classics from the 1940s and 1950s and some of those old movies are amazing. They were movies made by grownups, about grownups. The characters were realistic, the storylines were believable, and we didn't have to watch anyone vomiting or urinating – two of my pet peeves in movies. Why do we have to see that?  Maybe I'm a prude, but is it really necessary to see -- and hear -- folks' private ablutions? Watching someone vomit is not one of my favourite things, thank you very much, but every movie seems to have a vomit scene now, or a group of men standing at urinals, piddling.  *Y-U-C-K*

Please, just give me a good story, no mock documentary (mockumentary?) make the characters believable, and most of all entertain me.  All "The Fighter" and "The Social Network" succeeded in doing was annoying me.
Posted by Jo at 10:57 AM

I have not seen either movie so, of course, I have strong opinions about both! Heh!

Okay. Perhaps it is best I do not comment about the movies other than to say I enjoy movies that are fun to watch, make me feel good and allow me to escape into another world for a few minutes.

Regarding your post from yesterday about people who are not pleasant to be around, just remember you have to be your own person. If someone does not accept you for who you are, that is their loss.

Again, I have to agree with you Jo. I haven't seen either movie yet, but I am consistantly let down by movies lately. Unless I am watching TCM! The month of Feb had some amazing programming due to the Oscar's being that month. I had the pleasure of watching "The Bad Seed"(1956, I think)and I think it had some of the best acting, storytelling and suspence I have seen in years. I even rented in on Netflix so my hubby could watch it. Have you seen it?

Well, I did see "The Fighter" and was mesmerized. No, it wasn't "pretty," but I was enthralled by the characters. Have not seen the other one. I do agree with you, though, that they should ban all toilet and vomit scenes - really, how does that propel the plot along?

I enjoyed the Social Network but didn't think it award worthy. Haven't seen The Fighter or The Kings Speech, but from what I've heard from you and other's online Jo, if I had to pick one...it would be The Kings Speech.

I saw The Social Network only because of the buzz pre-Oscar. It was OK, but I didn't think it held a candle to The King's Speech. Haven't seen The Fighter, and I don't think I will. (BTW, I thought Million Dollar Baby was a good fight movie.)

Have you seen Another Year? I've heard good things about it, as well as The Company Men. Both on my Netflix queue.

You just made me rethink getting Fighter on Netflix or at least change how soon I get it! LOL.

A good story is hard to come by these days, which is why I tend to love indie films or anything directed by Clint Eastwood.

Kim and I were getting ready to watch "A Perfect World" (an early classic directed by Eastwood), starring Kevin Costner, Clint Eastwood, and Laura Dern. It's a beautiful movie with an innocence woven throughout a con man's arc. If you haven't seen it, check it out. "3:10 to Yuma" was another one I liked. Anything by Sofia Coppola (especially "Lost in Translation").

The thing that most screenwriters miss (or even a great many novelists) is characterization. You can have a great story, but if no one cares about the characters, they will walk out of the movie unsatisfied and not caring what happened in the end -- as you found out with your experiences.

I haven't seen the Fighter - my Dad and brother were boxers and it was never my thing. I saw the Social Network - did nothing for me. Give me an old B&W movie and I am happy. Turner Classics is the only movie channel I have.

I've seen all three, and I thought Winter's Bone was by far the best of the three, but I enjoyed both The Fighter and The Social Network, although all three were as different as movies can be. I thought the performances in The Fighter made it worth seeing.

I didn't think True Grit deserved the accolades it got either . To me there were strong scens allpegged out like laundry on the line but no cohesion.

I haven't seen either one, but I share your aversion to vomiting and pissing scenes.

Clint Eastwood's "Million Dollar Baby" with Hilary Swank was a good fight movie. I liked the first "Rocky" but once they start replicating, all I can see is greed.

Isn't it regretful that we don't have movies the calibre of the ones from the past?

Hehe, I really dislike being grossed out by films too, Jo. I might have a slightly higher tolerance...but I hate boxing as a sport, so I have a feeling The Fighter will be automatically lost on me.

I did like the Social Network though and here is why: Throughout the world now, Facebook plays a huge role. It's not my cup of tea, but as a for instance, people looking for news of loved ones in Japan found status updates on FB and Twitter.

Social Media has gone a long, long way towards shaping our geopolitical atmosphere too.

And The Social Network depicts the twerp that changed the world. Can you even believe that a guy that socially crippled, that completely lacking in empathy or anything resembling charisma is the same dude that touched the lives of literally millions, soon-to-be billions and changed them?

Yes, I know, fictional depiction...but not all the fictionalized when it comes to the personality of the founder of Facebook.

Jo, that's the guy that changed the world. Who the heck would have thought that?!? Amazing, slightly terrifying and oddly hopeful because it seems that things can indeed happen against great odds!

Winter's Bone was great and I loved the Social Network, but hated the music.

The demographic for movies has changed since the golden era of Hollywood. Teenagers did not have the spending money they do today - hence, movies are mainly made for teenagers now.

Also hate the 'personal ablutions' in movies, crude and unnecessary. Loved 'The Fighter', 'The Social Network', The King's Speech'. - All very different. I can't stand boxing, but went to the film because I heard it was more about a disfunctional family and a true story to boot. Christian Bale was absolutely amazing! Well deserved his Oscar. Haven't see 'Winter's Bone' yet. Believe it to be excellent.

I did not like Social Network, either. I fell asleep while watching it! And will not see The Fighter. I hate boxing and try not to watch it, ever.