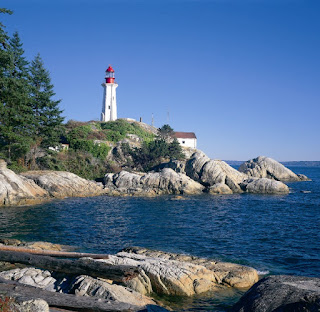 Cruise ship season has begun here in Vancouver, and yesterday there were several cruise ships in port with 20,000 tourists disembarking to visit Vancouver. I happened to be downtown while they were here, and I overheard several folks remarking on what a gorgeous city Vancouver is. I felt like saying to them, "You ain't seen nothing' yet. Wait until you get away from the downtown area..." So, for those of you who are planning a trip to Vancouver, or just a stopover during a cruise, I thought I would show you some of the must-see places you should visit while you're here. My favourite spot in the Lower Mainland is the lighthouse at Point Atkinson, which was named by Captain Vancouver in 1792, apparently for a "particular" friend of his. I wonder who she was. 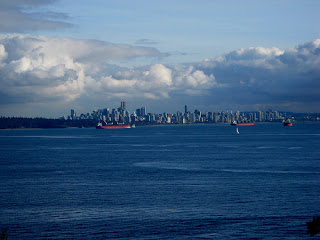 The park is exquisite but even more beautiful is the view from the lighthouse.  I never get tired of it.  The park surrounding the lighthouse is 185 acres of old growth rainforest with ancient trees 200 feet tall and 500 years old. In 1994 Point Atkinson Lighthouse was designated a National Historic Site. A few years later the light keepers were phased out and it is now automated. As well, Point Atkinson is part of the territory being negotiated in treaties between First Nations and local, provincial and federal governments to settle longstanding disagreements about land, resource, social, and citizenship rights. ~~ West Vancouver Museum and Archives 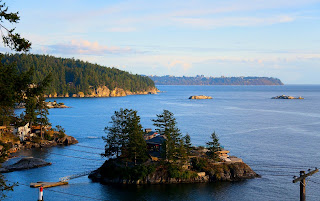 The drive from downtown Vancouver to Point Atkinson is about half an hour, along gorgeous Marine Drive, a winding road that has been compared to the famous drive between Monaco and Cannes.  Some of the most expensive homes in Canada are along Marine Drive, selling for between $10,000,000 and $20,000,000.  That's a little beyond my price range, but the view is free.  However, If you don't get the opportunity to drive out to Point Atkinson during your visit here, your cruise ship goes right past it as you leave Vancouver and sail off into the sunset.
Posted by Jo at 10:10 AM

I always like your posts about Vancouver but it always make me so envious. Ah, well. Thanks.

I will be sure to visit when I go!
I hope you write about your pretty city more often.

Golly Jo!!! I didn't realize that you are in "The Couve"! That being what the "Twilight" actors called Vancouver, where they spent much time... Filming the "Twilight" films.

Such a beautiful state in deed. I dated a Canadian man from British Columbia....more absolutely gorgeous country...

Mmm, I would love to come up for a visit. A cruise would be nice, but I prefer to see a town as the locals see it - from the winding roads that take you away from the busyness and hubbub.

If I ever make it up that way, I'll be sure to let you know. You can show me the "real" Vancouver!

Gorgeous pics and scenery! I would love to be on a cruise in Vancouver, right about now!

You're right. Vancouver IS a very beautiful city. I love lighthouses, too!

Flip's mother was a Canadian whose maiden name was Atkinson. I think she was from Winnepeg, not Vancouver, but I'm not sure.

I once had a stopover in YVR and stayed for 3 days - it did not rain at all. I was ready to move there permanently.

Beautiful pictures, I love lighthouses and your picture was wonderful.

It really is beautiful out there. It is a wonderful lighthouse.

There are few places in the world I long to visit, and the more I hear about Vancouver the higher it ranks on my list. How wonderful to have such varried places so close together - all of them beautiful.

Vancouver, what a beautiful spot. Maybe in my next life I will be fortunate enough to live there.
Thanks for sharing. Pam

wow, Jo, these photos are beautiful! No wonder you're so proud of Vancouver!

Strangely enough, it reminds me very much of my favorite city...on the opposite side of the continent...Portland, Maine!

Thank you for sharing!

This looks SO beautiful! Its so nice to be able to appreciate the beauty where you live! And now I think I need to visit Vancouver! Thanks for the insider's tips!

Wow. Vancouver looks beautiful - I'd love to visit - I have a cousin there. But we are off to the sunny Mediterranean on Saturday! Two weeks around the Greek Islands with Royal CAribbean. We can't wait!

Vancouver is certainly a beautiful place.

Any time you live where tourists from all over the world come to visit and famous people have homes, well ... that's a sign!

Of course the best thing is you don't have to get on a plane and fly away after a few days!

Gorgeous scenery Jo! (I was in Vancouver many years ago and it is indeed a beautiful city.)