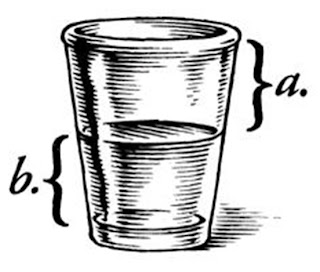 What do you see when you look at this glass? Is it half full, or is it half empty?  I prefer to see it as half full.  Seeing the glass as half full is a choice we can all make.  If we count our blessings, most of us will discover we have more blessings than we realize.  I feel very bad for people who don't understand this concept, who can only see the glass as half empty.  They judge their lives by what they don't have, rather than by what they do have.

My grandmother used to say, "Never trouble trouble until trouble troubles you."  That's very good advice.  It's all relative.  If people are going to be sad and angry over the small things in life, how are they going to cope with the really important things?  Anger is one of the most useless emotions, and I have seen anger ruin lives.

Anger is a natural part of the human psyche, a response to fight or flight, and it is necessary when one is being attacked by a sabre-tooth tiger or a Tyrannosaurus rex. Both humans and animals behave the same way when they're angry; they make loud sounds, attempt to look physically larger, bare their teeth, and stare. It's frightening for the people around them -- who often get angry in return, thereby escalating the already volatile situation. Anger begets anger. Folks become afraid of the anger because they never know when it is going to strike. My mother was angry and yelling all the time, and we were constantly on tenterhooks.  Because our mother was always angry, we thought she didn't love us, or even like us.  It changed who we were.

"People who fly into a rage always make a bad landing." ~~ Will Rogers

We all get angry occasionally; it's human nature. But there are varying degrees of anger, starting with mild annoyance, all the way to rage. Annoyance can be headed off at the pass before it becomes uncontrollable rage. Anger has an adverse effect not only on the victims, but on the person who is angry. Heart rate, blood pressure, and levels of adrenaline and noradrenaline increase. There is a theory that the "shot" of adrenaline becomes addictive, and the angry person needs more and more, much like any addict.  They become addicted to the "rush" of their anger.

"Anger dwells only in the bosom of fools." ~~ Albert Einstein

"Once we fully accept other people as they are without the slightest judgement or reservation – as all the enlightened beings accept us – then there is no basis for problems in our relations with others. Problems do not exist outside our mind, so when we stop seeing other people as problems they stop being problems. The person who is a problem to a non-accepting mind does not exist in the calm, clear space of patient acceptance.

Patient acceptance not only helps us, it also helps those with whom we are patient. Being accepted feels very different to being judged. When someone feels judged they automatically become tight and defensive, but when they feel accepted they can relax, and this allows their good qualities to come to the surface. Patience always solves our inner problems, but often it solves problems between people as well." ~~ Anger Management Techniques

People who are quick to anger don't understand how hurtful and painful their anger is, especially on the people who love them the most.  It's confusing and distressing for everyone, but anger is also so easy to control.  It's so easy...

"Temper tantrums, however fun they may be to throw, rarely solve whatever problem is causing them." ~~ Lemony Snicket
Posted by Jo at 8:07 AM

Good post Jo and you make a lot of really valid points. I've never understood people that get angry and say they can't control it. I've never had a good opinion of that type of person because if you can't even control your own mind, feelings and temper, what good are you for anything else?

Excellent post Jo! Folks who are constantly angry have never figured out the art of making lemonade from what they perceive as lemons. :)

I have a lifelong aversion to anger because my father was very angry and critical of me. Being made to feel valueless influenced many of my relationship choices later because even discomfort, in the absence of anything else, can become a person's comfort level.

I once told someone who acted like my father that if he had only accepted me as I was, I could have become so much more.

Have you been monitoring my dreams this weekend? I've had two nights in a row where I've been raging angry, screaming at people who have hurt me over the years. I think I'm trying to get into the acceptance stage. *sigh*

Reading this less than an hour after blowing up at my Kid. I needed this. TY. This isn't a normal thing for me either anger. Good Post.

Jo, such a thoughtful and well written essay!

I have noticed living alone, that I am almost always in a good contented mood. When living with others, not matter how companionable we are, I expend effort deflecting sadness or anger in the other person. There are many perfectly kind and gentle people who seem to live under a cloud.

And about the anger part. I have to say, I do not see it that way.
I am easily angered to be honest, but some people make it very hard to get along with & just push your buttons out of fun it seems. :(

I don't know whether I am a half empty or half full kind of person. The glass looks half full but I'm not sure if that's just because I think it's the healthy thing to say.

Anger is definitely hard to have around, either inside me or outside me. I avoid it but something I think suppressing real anger is even more destructive to the one who has it...