A Noisy Noise Annoys An Oyster...

Annoying, The Science of What Bugs Us
I'm reading a really good book right now that confirms what I have already suspected ~~ I am not neurotic. It turns out there is an actual science to what annoys us.  Fingernails on a blackboard, a fly buzzing around us when we are trying to sleep, a noise in the background while we are trying to concentrate, those annoying cell phone calls we all have to listen to while other folks chatter away ~~ even the person next to us in the movie theatre who nervously keeps jiggling their knee up and down ~~ these annoyances all have basis in science.  Who knew?

My next door neighbours annoy the h*ll out of me.  They're in their mid-20s, but they dress and act like four-year-olds.  Every night they're outside in their backyard playing some childish game, I'm not sure what it is, but it involves wooden containers and hacky sack balls.  Every time one of them scores a hit, they all hoop and holler, and the women scream and whistle ~~ you'd think the Canucks had just won the Stanley Cup.  It's so annoying.

There is even a scientific reason why spouses annoy each other.  "With spouses, we know that our partners know our hot buttons, and it's even more annoying when our partners bring them up".

Intentionality of action may factor significantly in the annoying quotient.  A door slammed by the wind is way less annoying than a door slammed by an angry spouse.  This intentional 'pushing too hard' isn't limited to adult relationships. "Kids do this a lot with their parents, and parents with their kids'.  Children will deliberately not clean up their rooms, will drink milk directly from the container, and will not hand in their homework as a way to annoy a parent who sets a curfew too early or refuses to raise an allowance.  Many of these annoyances will be overlooked when there is a commitment in a relationship and will be exaggerated when there is not.  Growing annoyance can be a sign of trouble to come." ~~ Annoying, the Science of What Bugs Us 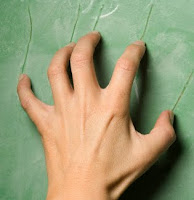 One of my co-workers coughs ... constantly. It sound exactly like a dog barking ~~ also an annoying sound. Another co-worker scrapes her chair back and forth against the side of her desk, sounding exactly like fingernails on a blackboard. *shudder* It drives me crazy, however, after reading this book, I'm glad to know that I am perfectly normal in being annoyed by these things that otherwise seem insignificant. It's science. Apparently there is even a scientific explanation as to why we are annoyed with listening to other folks' cell phone calls. The human brain is progammed to hear both sides of a conversation, and it doesn't 'compute' when it can hear only one side, thereby annoying us. Interesting.

Now I am heading off to work, and because it's raining I have to wear my jacket, my boots and carry my umbrella ~~ in the middle of July. It's so annoying...
Posted by Jo at 8:04 AM

You blog, however, is definitely NOT annoying. However, I started to think of other things that annoy me -- clumsily dropping things, forgetting where I put something, thinking about what I want to do next instead of what I am currently doing. Wait a minute. Those are all things that I do. Maybe I am the most annoying thing in my own life!

Thank God it's not ME! It's THEM, those nasty little neurons. I guess I should only start worrying when NOTHING bugs me, huh?

My thing is that I have super good hearing so everything bugs me. But what I hate the most is the sound of acrylic fingernails on a keyboard!!!

Funny and interesting stuff. When I was younger I used to tap my fingers as if i am playing the piano on the kitchen table. My aunt once noticed me doing it and told me to stop and seeking attention cause her son used to do the same !!

What would I give to breath fresh air after the rain in the middle of this dry summer !! Enjoy everything life brings and make the best even out of the annoying stuff!! (Sharing my Positivism)

LOL
Good exploration of what annoys us!

I always enjoy your posts, and this one especially. Since being awakened THREE separate times last night by a barking dog, and the screaming kids downstairs annoy the hell out of me, I am realizing from this post that I am perfect normal.

Coughing or throat clearing can drive me insane. How you do manage to deal with it??????

I Goggled in "What Bugs You" and can you believe what came up as number one? Your blog, A Majority of Two. I loved it. Pam

I never thought I was neurotic, just angry. Lots of things and people annoy me, much as I try to overlook them and go with the flow. I guess I'm just a full grown science experiment, which is so comforting.

this may the first and only time that I can be considered normal...who knew!

I enjoy this post muchly. What annoys me and a tad of the topic, is people who are constantly late for appointments. Making me feel that my time is not precious - which of course it is.
But the biggest thing of all as I have a keen sense of smell - is the great unwashed. This really bugs me!!! sorry but it must be said. Soap and water are not expensive - especially if you catch the rain. Blessngs.

Thank you for the great reading suggestion!

I have always enjoyed your posts so much..how much I realize only when I come back here again after a long time. And then again something or the other keeps happenenin in life which keeps me away from here indefinitely..soooo annoying.

Does the book explain how to filter out annoyances or learn to live with them? Sometimes people are annoyed by something that they could ignore.

Take outdoor smoking. Car fumes are far more unhealthy, yet we don't even notice them. Sometimes I'm in the street with a cigarette and someone will say, get the hell away from me with that thing - usually with lots of traffic around. So they've been conditioned psychologically that I'm doing a bad thing, but not the hundreds of spluttering cars emitting deadly fumes.

Most times, you can either choose to focus on what annoys you or mentally block it out.

They say when a marriage is going sour, the endearing little quirks he/she has are suddenly very annoying...

Fingernails on a chalk board will do it for me too.

I chuckled when I saw your picture of tangled Christmas tree lights; when you can't find the culprit that causes the whole string to not light that too is a major annoyance.

I think that those neighbours would annoy me too... I have a thing for hearing people brush their teeth - I have no idea what it is but I cannot stand it!

My husband assumes I'm always available, even when I'm hard at work on the computer. Comes up behind me and starts talking.

Smacking, poor manners in general, slamming doors, not picking up after YOURSELF, dogs that are restless during the night, 20 commercials during a 30 minute show.

I would add a few but there is not enough room in the comment box. :-)