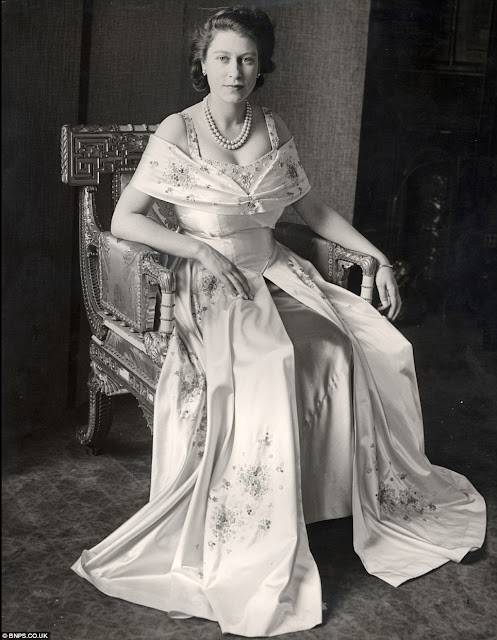 This year is the Queen's 60th year as a reigning monarch, and this photo was taken just a few weeks after her father, King George VI, died. The photograph was taken by a photographer named Kenneth Clayton, and it has remained hidden until now. Only a handful of people knew the photo existed. I like the photo because it is a young woman still grieving the death of her father, and it shows her vulnerability.  The photo is unretouched, and if you look closely you can see the imperfections.

I rather like the Queen.  She has presided over a particularly interesting period of history in the 20th and 21st centuries.  The Queen has known 156 Commonwealth Prime Ministers during her reign and 12 United States Presidents.  She is in her 80s, she is still working hard, and she has had an unfaltering sense of duty.  Times change, and the monarchy is in many ways becoming a thing of the past.  I like the concept of a constitutional monarchy, but I do believe the Queen will be the last of the great reigning monarchs.  If the Queen lives as long as her mother did, her son Charles will be a very old man when he inherits the throne, and his son, William, will be well into middle age.  Queen Elizabeth II will join the other two great monarchs -- Queen Elizabeth I and Queen Victoria -- as the longest reigning monarchs, all great queens and all three presiding over the most interesting and innovative periods in history.  And when this photograph was taken, it was all stretching before her, as yet unfamiliar territory for a young woman of 26.
Posted by Jo at 10:00 AM

Beautiful post Jo. She is a very interesting woman.

I'm really curious to see what Kate and Will bring to the country. She is a very beautiful woman and so very kind.

Isn't she lovely? Hard to imagine the life she has lead. Amazing to say the least. Fascinating on so many levels. Thanks for sharing this, I didn't know much about her.

Makes me think of an equally lovely photo of the young Elizabeth Taylor. Didn't I find it on your blog?

It's a beautiful picture. I have a lot of admiration for her. It has been interesting to see the changes in her attitudes that have unfolded over the last 35 years, beginning with the divorce of Princess Margaret. She has shown herself to be flexible enough to go against centuries of tradition.

Elizabeth looks sad but mindful of her dignity, and most of all, bravely ready for whatever responsibilities lie ahead of her. It's a very beautiful and poignant photo.

Elizabeth looks sad but mindful of her dignity, and most of all, bravely ready for whatever responsibilities lie ahead of her. It's a very beautiful and poignant photo.

What a wonderful photo. I have seen some photos of the young Elizabeth where she come off a bit facile, bright lip stick, huge fawning smile, and a manner of dress more fitting of Hollywood than royalty.

We have looked at Elizabeth for so long now, that we tend to forget that she was a beautiful young woman and that is captured in the photo. Little surprised with the cut of the dress.

I was quite surprised she does her own driving, or at least did at the time. There was a documentary on PBS about one of their castles, and I was amazed...she drove herself. She must be a "Royal PIA" to her security staff--good for her.

Being American, of course, we pooh pooh the Royal family yet remain fascinated all the same. I have read some of an anti-royalist sentiment in the UK. I think it would be a mistake to unseat the Royal family, although I think it would serve everyone's purpose to tone it back a bit. One could argue asking the state to maintain the number of palaces, homes, castles and etc is a bit much.

Frankly I feel sorry for them. Unlike popes, presidents, and prime ministers, the Royal Family is born into this situation and to have to live under that scrutiny to me would be crushing. Being God's representative on Earth to the Church of England might be a task better left to the Archbishop of Canterbury, and allow the Royals to be a bit human. I wouldn't want to have to live to the moral standards that is demanded of them.

In the US we only have a president and must rely on historical figures, flags, or the Constitution for our "spirit" of the nation. No one is going to storm a beach saying "God Save the President". And to me there in lies the value of the monarchy, no matter how PO'd one might be with the government, you can still love and die for the monarchy. (Although that probably wore a little thin at Gallipoli.) I believe the UK and the Commonwealth would be diminished without the monarchy.

So would the US. I have never particularly felt that our presidents are MY presidents. Yet if someone asked me who is my queen, I would answer with a bit of undeserved pride, Elizabeth. (Rather remarkable for an Irisher. I will probably have to turn in my shamrock. Ahhh! The diaspora have never been good at keeping up the hatred.)

I have great hopes for Kate! I hope Willy don't screw it up. A little commoner blood may turn that stale blue blood red with vitality.

Charlie? The lost generation, kind of hoping he pulls a couple of years to keep up appearances and abdicates to Kate and Willy--note how the are a pair. The House of Windsor needs a good airing out.

Elizabeth, like her beloved father George VI, has been the epitome of faultlessness and both have been much loved by millions of Brits, and I'm one of 'em!

During WWII King George VI stayed firmly in place as the Nazi bombs blasted so much of London. Unlike his selfish brother,Eward VIII, George stayed steadfast throughout.

He seemed,(to me), like the father of our country. His early death was almost as though my own Dad had died.

Our Queen is so very much her Dad's daughter and she's been with us for so long now I don't think there will be anyone who can live up to Elizabeth's standards. Kate IS a possibility; Camilla a NO-NO.

Thanks for posting this photo Jo. A great find; well done you!

I'm a big fan of the queen and that's a beautiful photo of her. Sixty years in the service of her country - she's an amazing woman who has been the dignified face of her people.