The Mull of Kintyre 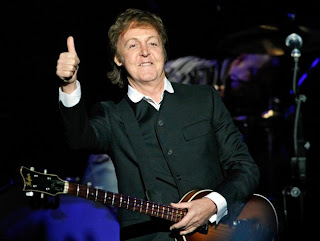 Last night I passed up a chance to see Paul McCartney in Vancouver.  Silly me.  Silly, silly me.  I have never been a huge Beatles fan, however, always preferring the bad boy Rolling Stones instead.  So when the tickets to last night's show were offered to me, I declined, and I called my daughter and asked if she would like them.  But Christmas is coming up, and the price of the tickets was a bit steep, so ... she declined as well.  I should have taken them and gone to the concert anyway.

Did I mention, silly me?

Phinnaeus and a friend of his did go to the concert, however, and I'm very glad they did.  It's sort of a continuum that kids from his generation still enjoy the music of the ... um ... "older" generation.

My favourite song of Paul McCartney's is The Mull of Kintyre.  My dearest friend from school married a Scottish fellow and moved to Aberdeen, Scotland.  A few years ago I went back to visit her.  She and her husband took me on a tour of Scotland around the Aberdeen area.  One afternoon as we were driving along the North Sea coastline, The Mull of Kintyre began playing on the car radio.  The feeling was surreal.  Here I was, driving along the beautiful, rolling coastline of Scotland, listening to The Mull of Kintyre.  It was like the sound track of my life.  It was beautiful.

My friend, Sherry, passed away two years ago, and whenever I hear The Mull of Kintyre, I am back in Scotland with my friend, driving along the North Sea.  It is a very strong memory, and one of my fondest memories.

Apparently, Paul McCartney doesn't play The Mull of Kintyre very often at his concerts.  In fact, it is said he plays it about once a decade.  I don't know if that is true or not, but if I had gone to the concert, I certainly would have wanted to hear him play it.  Well, last night Paul McCartney and the wonderful local Delta Police Pipe Band played Mull of Kintyre, and thanks to the wonders of YouTube, I am able to watch it.  It is a beautiful tune, and it still makes me cry.  And it still takes me back to the beautiful drive along the North Sea in Scotland.

Smiles in the sunshine And tears in the rain Still take me back to where my memories remain Flickering embers growing higher and higher As they carry me back to the mull of kintyre Mull of kintyre Oh mist rolling in from the sea, My desire is always to be here Oh mull of kintyre

I remember it was number one in the charts here for weeks and weeks and weeks so he probably got bored with playing it! I think it has strong memories for a lot of people for that reason too; it was played constantly and went into the memory banks whether we liked it or not.

Hope the weather's better for you than it is here in the UK!

Such bittersweet memories you have now with this Song. :(

Me & my mother love that it... (no we don't have any celtic roots, but we love listening to pipes)

We were lucky enough to see Paul McCartney in concert in '89, Linda was still alive and the show was wonderful, but he did not play The Mull of Kintyre

Thanks so much for this - loved it!!