Beyond a Reasonable Doubt 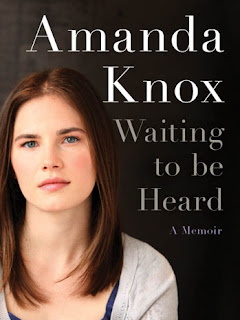 Amanda Knox has now published a book about her journey through the Italian courts, and I am looking forward to reading it.  For some strange reason, which I cannot explain, I am not entirely convinced of her innocence.  Intellectually, I think she is probably not guilty of the crime, but if I were on a jury, there would be that small, nagging voice in the back of my mind that would create "reasonable doubt".  I cannot explain it.  It's just there -- questioning.  Amanda Knox has now been ordered to stand trial again in Italy for the murder of Meredith Kercher, even though the Italian Appeals Court stated the prosecution's charges against her were"not corroborated by any objective element of evidence." Amanda Knox will most likely not be expedited back to Italy because it violates the U.S. legal principle that a criminal defendant can't be tried twice on the same allegation.

I'm looking forward to reading the book, and maybe it will silence that little voice in my mind that questions ... hmmm ... is there more to this story than we know?

I have that same doubt, but don't know why.

I've always wondered, too. But if she did it, she will have to live with her guilt all her life.

Linda and Leslie, yes, what is it? I'm not sure. I just have this gut feeling that won't go away.

I can't put my finger on it either but that little voice nags at me too...what if?

I don't know what to think. It will be interesting to see if your opinion changes after you read the book. Please do a book review of this fascinating story!

The nagging voice might come from her body language. If you cut the sound to her interviews, you see a face that (to me) looks deceitful. It's nothing concrete, but it is there in her glances, the tilt of her head, the presence or absence of anger, the facial muscles, the eyes.

There are people who make a living studying faces to judge someone's honesty.

I don't know, but I too have questions. Questions that will not be answered in Amanda Knox's book.

I didn't know much about the story of Amanda Knox, and I don't think I'll bother with the book. I'm more interested in the other Amanda — Amanda Todd — who killed herself after experiencing extensive bullying.

I wonder, too, but there doesn't seem to be any hard evidence that she participated in the murder. There is something that seems shifty about her, but that is probably true of many young people.

I agree that she probably won't be extradited since we do have double jeopardy in the US, but this will be with her for the rest of her life, whether or not she was involved.