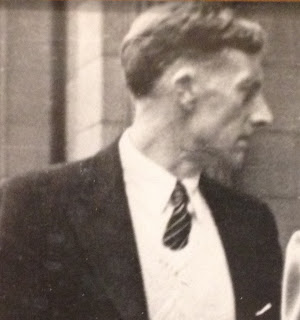 Today is the anniversary of the day my Dad "went to meet his Maker", as he used to say.  I think about my Dad every day, and sometimes I still talk to him.  I have this picture on the wall next to my desk at home, because it reminds me of how much alike we are.  I inherited his nose -- "the nose knows".

My father was the most intelligent man I ever knew, and I recognized that from a very early age.  He had an extensive library of wonderful books, and he instilled in me a love of reading.  He once told me that, if I were going to read a book, I might as well read a good one.  To that end, I have never read a Harlequin Romance novel, but I have read all the good authors.  Name an author, any author, and I have read him.  That was a gift from my Dad.

One of my fondest memories of my childhood is of my father and me, on a bright summer's day, sitting on the banks of the Somass River, eating lettuce and tomato sandwiches and having deep, philosophical discussions about life.  I was only four years old and my father was teaching me how to swim.  We would take a little picnic and sit and chat while we waited to go back into the water.  I remember thinking at the time, this will always be one of my cherished memories -- the bright sunshine, the green grass, the cool water of the river, and my father talking with me about all the mysteries of the universe and beyond.  He called me "Kidlet" and when my daughter was born, he called her "Kidlet" too.  I used to watch him sitting beside her on the chesterfield, talking to her the same way he did with me.  He used to tease her affectionately that she was a "hidebound reactionary" because she had very conservative views, and he was liberal. 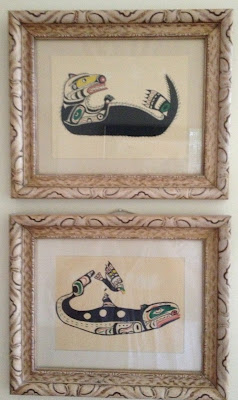 My Mother was a wonderful artist, but my Dad also liked to paint.  He was particularly fond of Native art, and our house was full of baskets, totem poles, paintings and carvings that Dad had collected.  When my parents sold their house, they donated all of their art work to the local museum.

I later asked my mother, "Do you have any idea how much all of that was worth?"

It was worth a lot, a small fortune in fact..  Two paintings they did, keep, however, were these lovely paintings of the otter and the killer whale.  If you look closely over the killer whale, you can also see the crow dive bombing the whale.  It's hard to see the detail in these photographs, but the otter has little prickly bits of fur all around him.  It wasn't until just a few years ago that I learned these paintings were done by my father.  He even made the frames and carved the detail into them.  Who knew!

At one time a tiny green frog took up residence underneath our house.  You have no idea how loud a tiny green frog can be in the middle of the night.  Oh, goodness.  My mother wanted to send our Scottie dog in after it.  Oh, no, my father wouldn't hear of that.  He managed to trap the frog, and then we drove thirty miles out to Sproat Lake, where the frog was released to live happily ever after in a grove of bright pink lily pads.  A few years ago I was going through my father's books, and there was a small book of poetry that he had had as a teenager.  Inside the front cover was a poem he had written when he was a young man, a wonderful sprightly little poem called "An Ode to a Little Green Frog".  I laughed.

My Dad was definitely unique, and the older I get and the more I look back in hindsight, the more I realize just how unique he was.  It was a privilege to be his daughter, and I'm very, very happy -- finally -- that I inherited his nose.  A part of him is with me forever.

What a nice tribute to your father. I find it fascinating how many of us think our fathers were most intelligent. Mine certainly was. He passed away 11 years ago and I still miss him greatly. I, too, have conversations with him. I feel so sorry for the current generation that they have mostly been raised without a father. I think it shows in the way our county is going.

Well, here I am commenting after my sweet twin sister,Lana. Of course our dad was intelligent, most of it self-taught. He had so much common sense, and couldn't understand people who didn't! Two of my fondest memories from my dad are his letting us sit on the back of the chair and putting pin curls in his hair. When we were a little older, he'd get down on his knees and play jacks with us. Even with his big hands, he never moved a jack! He always one!

I loved your wonderful tribute to 'Red'!

Now, just a 'hi' so I can get follow up comments!

What a lovely and heartfelt tribute to a very special father who not only gave you his distinctive nose, but also gifted you with a lifelong love of reading, good conversation and intellectual curiosity. It doesn't get any better than that!

You are very lucky to have such wonderful loving memories of your father. That's how it should be between fathers and daughters.

This is so touching Jo. I just lost my own daddy a month ago and find it so healing to write about him. I sense the same in your post.

Those memories that our fathers instill in us are so special and nothing, not death, not life can take them away from us.

Yep, your photo of your dad and your descriptions of him look just like mine, except my dad was a scientist and a practical man. He didn't like reading. He died last year and I am still so sad. My mom - 3 years ago. Do we ever get over missing them?

A very nice tribute. It sounds like he was amazing.

Dear Jo, a loving and lovely remembrance of your Dad.

It's not every Dad that instils such love, knowledge and feeling as you describe.

Are you looking for business loan to refinance your needs then pedro loan offer will be good for you because is genuine and liable to work with on an affordable rate and simple loan terms and conditions, also for any kind of loans you wished to apply with email pedroloanss@gmail.com