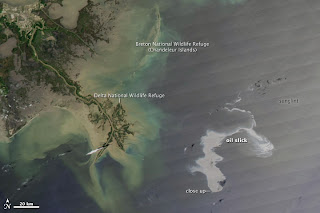 Do you remember Gordon Gekko's speech in the movie Wall Street?

"The point is, ladies and gentleman, that greed, for lack of a better word, is good. Greed is right, greed works. Greed clarifies, cuts through, and captures the essence of the evolutionary spirit. Greed, in all of its forms; greed for life, for money, for love, knowledge has marked the upward surge of mankind."

We were meant to be shocked by that speech. It was meant to change our way of thinking, but it doesn't seem to have done so. This satellite photograph shows what greed can do. Greedy intelligent executives of British Petroleum (BP) convinced folks that it was safe to drill for offshore oil, in the same vicinity as the Breton National Wildlife Refuge, and the Delta National Wildlife Refuge, and as a result, 42,000 gallons a day of crude oil are spilling into this beautiful area, from an offshore oil well that blew up and sank. When that oil slick lands on those beaches -- and it will -- that area will never be the same.

Mother Nature keeps giving us wake-up calls, and we keep ignoring them. And we'll keep on ignoring them as long as there is greed.
Posted by Jo at 7:52 AM

BP gave us a wake up call in 2005 when one of their oil refineries blew up and killed 15 people because, by their own admission, they were too cheap to properly maintain it. An investigation found that this lacks view of safety and proper maintenance was a company wide problem. It was their standard operating procedure.

According to our politicians, Big Business will always learn from past mistakes. If one of their facilities blew up and killed 15 people BP would start taking safety and maintenance more seriously wouldn't they?

So much for free market and letting companies regulate themselves. You are right on Jo - Greed wins every time its tried.

You're dead on with this. I can't believe more isn't being done to protect the sea life, as well as, the 100 different wildlife species that are at risk. As far as I'm concerned criminal charges should be laid. What happened to the safeguards that were in place, what happened to protecting our planet...this angers me. GREED!

I just read this on CNN

"Efforts to shut down the well have failed so far" (shaking my head) Your post has covered it all. Great job Johanna!:o)

As consumers, we're a huge part of the problem. I live in a part of the US where mass transit is limited, and we never do anything to change it because we'd rather drive our cars anyway. And because we insist on driving our cars, we want gas that's relatively cheap, which is why "Drill, baby, drill" became such a rallying cry.

Consumers, politicians who prefer pandering over leadership, and big business all share the blame for this one.

Amen. This one is worse than the Exxon Valdez, which should have been a lesson. Until our pathetic species actually understands that we and all species are interrelated, that what affects one affects all including us with our giant but not so marvelous brains, this sort of destruction will continue until there is nothing left of our planet.

Katy, I have come to the conclusion that Big Business owns governments. It is the same here in Canada too. British Columbia is owned by BC Hydro, and we are held hostage by them. It's very sad. The bottom line $$$ is all that counts.

Anne Marie, I saw an interview on CNN this morning with a fisherman, and his livelihood has ended. He, and hundreds of others, cannot fish there now. It's disgusting, isn't it?

Single and Sane, in the 1950s, all the major cities ripped out their very efficient trolley cars and put in highways for gas-guzzling cars. It was the single biggest mistake they could have made...!

Jo I can hardly bear to think about it - it's just so horrible. Can't say this disaster isn't man made, can we?

I've given you an award, which I'm sure you don't want to mess with. But I want people to know about you - so there!

Very thought provoking post, Jo and I couldn't agree with you more, about the greed and the neglect of safety issues. But, I also agree with Single and Sane, that we, the consumers, are a very large part of the problem with our addiction to oil, that is the real problem! It's a catch 22, and if we stop drilling in the gulf, it will not only increase our dependence on foreign oil production, but create a huge income deficit for so many of our people, who work on the oil rigs, here along the gulf coast!

We are like children, we want what we want and damn the consequences. It's heartbreaking.

So true...it seems inherent in our nature that we constantly want more, desire more, all the while we're rapidly killing our only home in space. This reminds me of a very poignant quote by John Clapham, who said, "Economic advance is not the same thing as human progress."

How right he was.

Josie, I could not agree more.

Sadly, the genie is out of the bottle. The consequences are with us. The only wah we can hope to prebent the next catastrophy is to make BP pay for the costs of all the effects: containment, restoration, loss of property value, lost income to workers, lost profit to businesses, lost tax revenues, and everything I haven't thought of yet.

Of course BP will try to stick US taxpayers and effected residents with those costs.

Big business does control government - not just in the USA, but all over the globe.

I think those who think greed is good, are tending to use the word out of context.

Being ambitious; energetic, resourceful, and productive can all exist without doing damage or ill-will to the citizens of any city, state, or country.

However, demanding excessive profits in terms of dollars that benefit a handful of people, while harming a large number of people is greed gone criminal - rampant; lusting - a type of conquest much like ancient times.

Greed without conscience and grace, is evil and always will be.

One can still have a quest for success, but if they abandon morality in the process, then there is no success as I see it.

Yesterday while hiking through a logging operation, and seeing all the destruction of the forest, and the trees crashing down, I thought of all the demand for lumber, increasing as we humans continue to overpopulate the planet. The oil, the trees, all the consumable parts of the world are fast being destroyed. And what will be left for the children?? :-(

I am heartbroken. I couldn't believe it when I heard "drill baby drill"... disgusting!
I would love to see windmills all over our windy deserts, why don't we do it?

We have such a wonderful world, why are we so set on distroying it?

Man...New Orleans deserves a break... a big one.

Haven't we learned the lesson to temper greed with environmental stewardship? It's been a mistake to allow companies to explore in such deep water areas. Or, as you say, to cut so indiscriminately our remaining pristine forests.

The reaction to this horror story has barely begun. Voices like yours will change the agenda in Washington. Don't lose your anger.

I have been having lots of moments the past few years... wishing I could go back to life in the 50's. The headlines lately are really disturbing. Some people think "The Good Old Days" never really existed, but there are many times I disagree with that. Our dependance on oil is out of control. I sure hope things start going in the right direction very soon.

Hopefully, we are finally gonna get serious about finding better ways.

Haven't seen the movie, but it's shockingly ignorant!!!
Hey, I like your pomegranate painting very much, somehow all the seeds draws the eye into the painting!

Oliver Stone was ahead of his time on that one. The problem is that in American politics when somebody with a well known political bias talks the other side reacts automatically without hearing what was said.

If Obama said vote Republican they'd probably get confused and vote for Democrats.

And now the states want federal help to clean up the mess that private enterprise made. Where are the teabaggers now?

You explained the situation perfectly. It beggars belief that this was allowed to happen.

Single and Sane said it well.

We, "the people" need to take more responsibility for our lives, not in an angry and destructive tea-bagger way but with more thought to the ways our cherished lifestyles contribute to global problems and corporate villainy. The language in this article is a bit rough but the ideas make for interesting reading. Problem is, it will take a world, not just a village, to effect the kinds of change that will make a real difference (and sooner rather than later).

Bill had an excellent thought, get the teabaggers to clean up the oil spill? That way no federal involvement and the oil slick gets cleaned up, AND the tea baggers are quiet for a bit.

Hi Jo, we have had similar oil spills on our most prized possession, the Belize Barrier Reef. Once able to boast about its pristine condition, we recently have been faced with a series of oil spills recently.

Jo the whole thing is sooo awful and horrific!alot of sea creatures are going to die. We MUST change the way we live!

When will people wake up? Seriously. What is it going to take? These companies have to be decimated in the court systems in order for the others to stand up and take notice. Safeguards not put in place - greed over everything else. Greed was the reason for the mining accident, greed was the reason for the spill on the reefs in Australia. Double hulled ships should be the only ones shipping oil. We all need to be prepared to pay more for gas, however. It's up to us to demand laws with teeth.

I shudder each time I see new photos of the spill and the innocent wildlife drenched in black gold - all in the name of "greed." The final toll on nature is yet to be determined. Let's hope that this wake up call is taken seriously.