What Is A Photograph...? 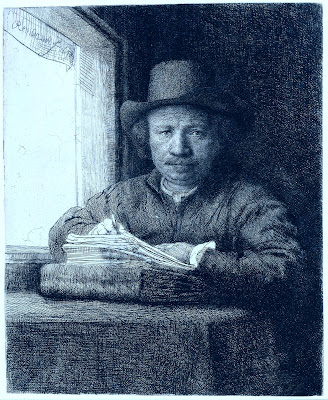 Definition of Photography: pho·tog·ra·phy
Pronunciation: \fə-ˈtä-grə-fē\
Function: noun
The art or process of producing images by the action of radiant energy and especially light on a sensitive surface (as film or a CCD chip).
Etymology: From the Greek words phos ("light"), and graphis ("stylus", "paintbrush") or graphí, together meaning "drawing with light" or "representation by means of lines", "drawing".

The man in this picture is engaged in a deep conversation with us. He is saying, "You can see me, but I can also see you. I know you are there, you are looking at me, and I'm aware that you're looking at me. I have left an image of myself for you." He is saying to us, "Allow me to introduce myself," and it's almost as if he is ready to offer us a cup of coffee. By almost any definition, this image is a photograph -- except that, it was done 362 years ago, in 1648. The 362 years that separate us do not exist. This picture seems so real, and is so compelling, I can't look at it without being drawn away from the 21st Century and into 1648. All sense of time is suspended.

More than any other work of art this man has produced, I believe this drawing is his immortality. The drawing is not as famous as most of his other works, and perhaps many people might not even recognize him. But he gazes out at the world, possibly for centures to come, and tells us he was here, he lived, and despite his extraordinary talent, he was just a normal, regular, ordinary person like everyone else -- sitting at his kitchen table, sketching. And in case you don't recognize his signature in the bit of lace curtain at the top of the window, this is Rembrandt Harmenszoon van Rijn.

To me, this picture is an incredible photograph, an immortal snapshot suspended in time.
Posted by Jo at 8:57 PM

Hi Jo. Sorry I have not been to visit...we thought we were selling the house and moving back to CALI, but that did not happen. The market sucks and we are not giving our home away. My hubby needs to retire. Lots to catch up on...I will be back to the treehouse... hugs!!!

Photography is truly amazing, beautiful. You inspire me!

Wow, 1648. That was 4 year before the first Europeans came and settled here in South Africa

I can picture him sitting at the table, drawing this picture, and you're right, it's like looking into a mirror of the past. I saw the lace and when I enlarged could see his signature. I had never seen a self portrait of him before and also wonder if he is tired from looking out from the photograph for hundreds of years. :-) Thoughtful post.

What a wonderful post Jo. I had never seen a portiat of Rembrant before. He seems quite content. I don't think I would have ever imagined this face just from looking at his works. Thank you for sharing.

He's saying: "What do you want? Can't you see I'm deep in paperwork? Quit interrupting me!"

It's marvelous! I think I saw this one in Amsterdam, long ago. Rembrandt was perhaps the most compelling portraitist ever. The camera had to be invented because no one else could draw like that.

I'll never again see this type of art without thinking of your splendid post. I now have a new way of looking at photographs in general, also.

Wow...you've described it so well, I didn't realise it was Rembrandt and when I finally clicked, it was quite moving. You're right, there is something infinitely human about this piece, the man behind the Art, looking out forever amongst his people. Truly brilliant.

..and thankfully also for Michelangelo; DaVinci, and our modern-day Norman Rockwell (to name just a few others who've given us hundreds years of portraits before the camera could do it so easily....

I've never seen a self portrait of his before. You are right; it looks like a picture. The detail is amazing. Thank you.

I have never seen this before. It looks like a sketch to me and not a photograph. Maybe I should go back and reread your post. My brain might be confused. Going back for a look again...

I don't know where my mind went with that last post...
I see now what I didn't see before. Embarrassed...

Simply beautiful post Jo. I admit, I was thinking Rembrandt as soon as I opened your page and saw the image, but that may be because I once spent hours gazing at a self portrait he did which is in Kenwood House, Hampstead Heath, London... which you can see here :

Love this drawing you found, had not seen it before... many thanks !

If it's not photosensitive it's not a photograph. Rembrandt's almost 100 self-portraits are pretty realistic but not as temporary as a photograph.

What a wonderful post JO. Your text really brought this photo alive for me.
Have a good week.

Thank you for helping us to comprehend WHY he is such an important artist!

Marvelous post Jo. A wonderful reflection on immortality and art.

This is incredible Jo. I also like the pics on right side of yr blog.