Kudos To The New York Police...! 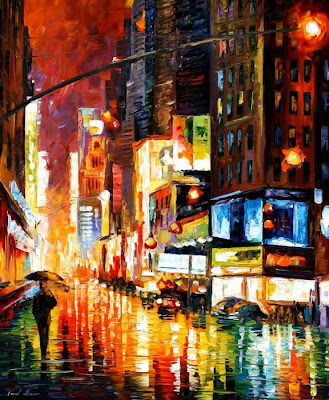 Congratulations to the law enforcement officials who caught the perpetrator of Saturday night's failed car bomb in Times Square. The little weasel suspect was arrested just as his flight to Pakistan was about to take off from J.F.K. International Airport. I can't even imagine the carnage there would have been if that bomb had detonated. Times Square on a Saturday night is filled with New Yorkers and tourists there to enjoy the New York City night life. The bomb was very close to the theatre showing The Lion King, which is a family oriented play. My family was at that very spot, attending that very production a few years ago. Another place in time -- the wrong place at the wrong time -- the possibilities are horrific beyond belief.

Why do people do these things? What do they have to gain by killing innocent people -- children? They seem to be constantly blowing each other up in their own countries, and their victims are just regular folks out shopping in a market on a Saturday afternoon, or having coffee in an outdoor café. Why? I don't get it. What am I missing? Something is wrong with these people -- it goes way beyond politics or religion. Something is seriously wrong with someone who would methodically set out to murder complete strangers -- innocent people. I believe people who do this are just psychopaths, using a "cause" as an excuse for murder. Humanity means nothing to them. Psychopaths R Us Corporation.

Well, thanks to great police work, this little creep suspect got himself caught within 48 hours. And, his bomb failed. Yay!
Posted by Jo at 8:03 AM

I think you should have made: "Little Weasel" the title of this post. Great cops; dumb bad guy. They should all turn out this way.

I too am glad this story had a happy and satisfying conclusion.

I think thanks should also go to the street vendors who noticed the suspicious vehicle parked in the bus lane. At least two of them contacted police in the area to let them know that something didn't look right.

I agree Jo - murder is murder. Targeting innocent people is the easy way out for these folks.

Killing of innocents cannot be justified by any means or by anyone.

Nothing can be gained by killing ordinary people.

i am happy that world did not see another terror attack.

I'm afraid there will be more attempts like this one. They, the terror people, will be testing Mr.Obama - "Is he our muslim brother or is he going to play Bush with us" - that's the question.

Great post Jo. Anyone who can kill innocent people in cold blood is a thug. I can't belive they tracked this guy down so fast. He doesn't seem to have been the brightest bulb in the box on many levels.

Terrorists can't kill us on the planes, anymore, so now they are attempting to kill us on our streets. When will it end????

Bruce, I agree. Talk about the Darwin Awards...! I wish they were all that stupid. :-)

Alissa, yes! That street vendor was on Good Morning America, and he definitely should be given the keys to the city -- for life!

Bug, I think these people are psychopaths, just out getting their jollies, using their "cause" as an excuse.

IP, yes, and I think it's time the silliness stopped. Why are human beings so violent to each other???

DUTA, oh, gosh, I hope not...! Innocent people will be the victims, not Obama.

Katy, and then the little weasel tried to escape, but they caught him. Yay!

Gigi, It will end when they all blow each other up. *sigh* It's just too awful, isn't it?

I reiterate your sentiments, well done to the NYPD for such a wonderful job on saving New York from utter devastation, it's amazing how much destruction and death they have managed to prevent.

I would like to state, that these people are no Muslims, they are crazy bastards, that is all! :(

Mohammed did not go out into the World, saying, rape your niece, kill the heatens and blah, blah, blah.

These so called Muslims out there doing that kind of stuff... they even kill their own mothers & sisters because they did not read the Kur'an thouroughly!

❤ The Mother is a blessed being, for you came forth out of her womb! ❤

Thanks for ur e-mail.
It was nice to hear from you.

Check your e-mail. i sent you something to read.

Sam, it was definitely a near-miss. I hope that little weasel never sees the light of day again. All that death he had planned...! Omigosh!

PinkPanthress, I agree with you. They're doing this is the "name" of religion, but they're just crazy psychopaths.

IP, thank you. I felt bad that you and "A Woman" had got caught in the middle of a kerfuffle. I hope you two have worked it out now. Cheers!

I listened to a little of the President today, and he actually called this guy a 'terrorist'. Maybe he is getting it?

I guess these people are like rabid dogs. Completely mad.

What about this idiot's wife? What sort of person is she, I wonder? If she knew of his plans then she too will be punished in due course. If she was genuinely not aware of what her husband was about I still think her life will be scarred forever.

Fortunately that bomb did not detonate; the probable carnage that would have ensued is just too terrifying to imagine.

I am also glad for the outcome of this event. I can't help but think of a study I read long ago where rats cooperated with each other until the cage they were in got more and more overcrowded, and then they began to attack each other. Is it possible we just have run out of room for us to live together in peace? I worry so much these days, although my sister says that worry is misuse of the imagination...

there is no rhyme or reason to hatred.

how nice to have a happy ending for
a change.

I totally agree that there is something "seriously" wrong with these people who commit such acts. Thankfully this one wasn't too bright, and the police did a great job. Great post, cher!

Words escape me when I think about the hatred that feeds these people.

Yeah, let some parents get a hold of the weasel.

The NY police and FBI were amazingly efficient, thankfully. They actually pulled the guy off a plane bound for Dubai, which raises serious questions about airline security since he was on a "do not fly" list.

I have family in NY and my daughter is flying there tomorrow, so this event was particularly chilling to me. It's utterly terrifying that there are those who want to murder strangers, and since they are eager to die themselves, there are really no deterrents to their sick acts.

Am very relieved that the guy got caught. People who are indoctrinated will believe anything! That's probably what happened during his 5 month stay in Pakistan.And when you learn to hate, you miss the most obvious things!

The law enforcement agencies involved did an excellent job on this one. If only they were as effiecent over here.

In this "us against them world," all that do not conform to their twisted ideology are "them" and they are fighting to make "them" fear "us" thinking that I will somehow come to see reason for their fight.

There is no reason in illogical.

For sure time does have changed much. Agree with you about the good work the Police did !
Makes one wish that the lawenforcement over here will be just a successfull during these rough times.
A wonderful Wednesday for you.

They do these things to spread fear. When people are afraid they do stupid things and vote for men who don't always have their best interests in mind. It's much easier to get your enemies to kill each other than to kill them all yourself.

It would take an army the size of China's to destroy the United States in a conventional war. And even then there are nuclear weapons. If you can get Americans to live in fear you'll find victory without tanks and aircraft carriers.

It was great detective work by the police and FBI. Can't believe the guy almost got out of the country though.

On the other hand, America is dropping drones on Pakistan like it was some ghastly video game. So America is not killing innocent people? Why are we so outraged when people do to us what we've been doing to them?