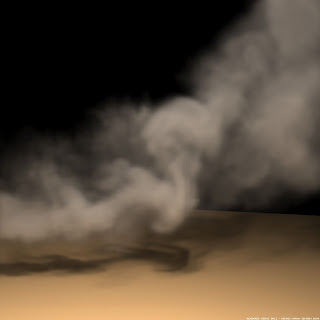 Now that summer is officially here in Vancouver, it's also the start of the silly season, and everyone is pretending they're living in a beer commercial. Does art imitate life, or does life imitate art? I'm never too sure, especially with beer commercials. I live next door to a beer commerical. The women all run around in skimpy bikinis, and the men are all buff and drink beer, and they barbeque copious amounts of animal flesh over smoking grills, like ancient cave dwellers. *sigh* It's definitely a guy thing. The only problem is, their barbeque is right underneath my bedroom window. Last night I woke up at midnight with barbeque smoke pouring into my bedroom. *cough* 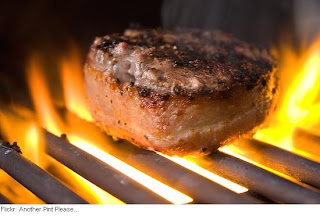 I love barbeque, but a little goes a long way, mainly because barbequed meat is a known carcinogen. According to the American Cancer Society, polycyclic aromatic hydrocarbons (PAHs) form when fat from meat drips onto the charcoal. They then rise with the smoke and can get deposited on the food. Oh, yum... They can also form directly on the food as it is charred. The hotter the temperature and the longer the meat cooks, the more heterocyclic amines (HCAs)are formed.

Apparently, in Canada, charcoal is now a restricted product under the Hazardous Products Act. According to the Canadian Department of Justice, charcoal briquettes in bags that are advertised, imported or sold in Canada must display a label warning of the potential hazards of the product.

Well, since beer and barbeque seems to be a summer ritual, this isn't going to go away any time soon. I just wish they'd move the #%*!%^#!& barbeque away from my bedroom window.

I used to have a neighbor who loved to barbeque at odd hours, as well. Her patio was next to mine, and with my bedroom looking out over the patio, it was a similar situation. I don't mind the smell when I'm hungry, but when I'm trying to sleep, well, that's another matter.

She also like to run the sprinkler at 1:00 in the morning. I was never so glad to see someone move!

Our next-door neighbors have both a barbeque and a meat smoker going most of the time, which means we have to keep our windows closed even on warm days. I hate it for all the reasons you mention plus I'm a vegetarian. And I miss hearing the birds sing.

As for the buff beer drinkers, if they continue to quaff beer on a regular basis, their "six-pack" abs will no longer be that buff.

I have to admit I love the smell of barbecue but not blowing into my bedroom at midnight! I'll keep you in prayer for rain.

I love a barbecue, but, as with all things, you have to take it in moderation - too much is, evidently, very dangerous. I never knew beer commercial people were actually real, I just though they were a corporate fantasy! Well, I feel for you, let's hope April showers make a come back :D

BBQ is food HELL as far as I'm concerned. The cooking smells are sickening. The food itself is probably unhealthy and possibly full of salmonella.

Fortunately, where I now live none of my neighbours have EVER had a BBQ in the 15 years I've lived here. When I lived in England, always in a town or city, you could bet your bippy that SOMEBODY would just LERVE the outdoor BBQ and all the kerfuffle that goes with it.

I'll do a UK rain-dance for you Jo. I'll get a cricket match organised and you can be sure it will rain as soon as the opening bat walks on!

This week will be a rain week, so it looks like you got your wish. BBQing at midnight is a little silly! And, oh sheesh, just about everything is a carcinogen, if you listen to what "they" tell us. Now they're starting that nonsense about cellphones causing brain cancer. Get real, I say.

Oh my, what a nuisance! We are still getting rain down this coast.Maybe it will blow over your neck of the woods.

It should be raining up there now, Jo, as it's been raining here in Bellingham all day. The next few days should give you a respite. We consciously chose an upstairs end apartment when we moved here, and it's on the south side with our prevailing wind from the south, so we're usually good. Plus I have no problem going into somebody's backyard while in my jammies and asking them to please take pity on a poor old lady! :-) (I'm a vegetarian too, rather a pescatarian since I eat fish.)

or pray they read your note telling them of the health hazards before they swill too much beer!

Charcoal is a restricted substance? my goodness, that would provoke riots down here.

You said the guys are all buff?

I have been called many things in my life but never, uh, buff. Bum, SOB, crank, grouch, old guy -- but never buff!

With all that buffness going on next door you are probably having a hard time getting any sleep!

Nice post i like it, keep blogging and If you want too, kindly and please visit my blog http://jabrasr.blogspot.com/ thank you in advance.

Forget praying for rain-pray their grill goes kaput! What's with having a midnight BBQ on a weeknight? Don't these folks need their beauty rest? Good luck!

Perhaps a case of beer and sweet reason?

Jo,
Greetings from Slug's Rest! Great post. Heres my two skewers worth: We slugs try to avoid both the barbeque, and the beer. People try to trick us into drinking all the time, but we are on to them and slide away when it is placed in the garden for our benefit. Barbeque smoke dries out our tender slug skin, which is not comfortable or attractive. Thank you very kindly for your visit to our neck of the leaves, we will keep an optical tenacle out for you when you visit.
Love and a happy wagging tail,
Mrs. Slug

Us South African's like to braai (bbq) as well. Its would probably be termed a national passtime. Although lots of people do use charcoal in some form, the popular thing is to burn wood and form your own coals. Anyhow... We are in the mids of a green drought in this part of the country. Its been thr driest in decades. The dams are running very low and we are being restricted with our water use. Lately we have had a fair bit of rain in the city and along the coast which mean that the drought here has been broken, but very little has fallen by the dams and their levels haven't increased. Big problems.

I didn't know that about barbecued meat!! You're always so good for interesting facts Jo!! Thank you!!

Or you could just move to Ohio where it's been raining too much to barbecue or do anything else outside for at least a week now. Love your line about living next door to a beer commercial - I can relate!

I will pray to the mighty God Mashabah Wwasah, that you will have rain, and lots of it! ;)

I was thinking the same thing others stated, "Well, never fear, they'll soon not be buff nor fit for bikinis with that diet!" Not soon enough, eh?

Ah well, as for health risks, we have a propane grill and...if I stopped doing everything that wasn't good for me, oh Jo, I think I'd likely end up with very little to do ;-) Moderation, moderation, and all that.

There's got to be a Strata thing that doesn't allow ritualistic meat grilling at that hour? I mean, these are the same people who gave you grief about your birdhouse!

I wonder if we can do a targeted rain dance?

"Get them and only them." Have them walking around followed by a rain cloud. A nice, gentle one, mind you :-) Just a steady, grill dousing shower!

Well, I do my fair share of outdoor grilling in the summer, but only around dinner time, and far, far from anyone else's windows.

I love to grill in the warm months, but hardly think that midnight is an appropriate time for such an activity. I would have to say something to these buff neighbors. It's worth a try as maybe they don't realize what's happening? Probably too much beer!

i have a funny picture in my mind of the
sophisticated lovely lady living next door
to cavemen and pebbles.

They sound like party animals. I didn't know that about the meat. I like the smell when my neighbors cook it. We don't own a grill. Or party.. Dullsville.....

When does summer officially begin in Vancouver?

I come from a barbeque culture. We learned to cook everything outside when I was a child. But we always used wood.