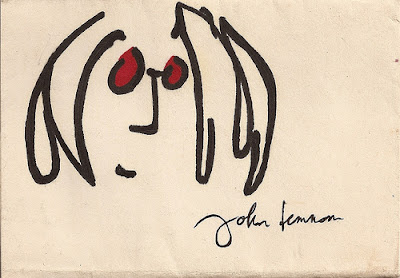 October 9th would have been John Lennon's 70th birthday.  Imagine...!  John Lennon was taken from the world too soon, as was his idol Buddy Holly.  One would like to think the two of them are together somewhere ... jamming.  More than any other entertainment figure in the 20th Century, John Lennon changed popular music, politics and culture, and even fashion, and I think he would be amazed to see how iconic he has become.  He was an incredibly gifted and talented artist, both musicially and artistically.  He was a poet and a philosopher, and he was a cool dude.  He is still greatly missed by the world.

I really wanted his round glasses, but with my already round face they just look too funny...

Imagine is one of my favorite songs of all time. The first time I heard it was on my mom's Roger Whittaker album - which means it was just a BIT mellower than John's version :)

He truly was unique and gifted. May he and Buddy RIP.
☼ Sunny

Yes to all of this. And did you know that his son with Yoko Ono, Sean, was born on his birthday? So happy birthday to Sean, who does his parents proud.

Other than the song "imagine," I don't actually know much about what Lennon did after the Beatles.

Years ago I had the chance to see an exhibit of Yoko Ono's art which was a mix of new work and work she did that showed her life with John. That was my first introduction to John Lenon the man, peace activist and creative spirit beyound song writing. The world did really lose a great man too soon.

I will never forget the pain and huge sense of loss I had when he died. I was walking on the street in Boulder when we all stopped for a predetermined moment of silence in his honor. Someone on a motorcycle came driving down the street with a boombox playing "Strawberry Fields Forever" at top volume. It was the only sound heard, and tears streamed down my face.

One can only wonder what the second half of his life would have brought. I like to thing he would have found a kindred spirit in Bono and been able to work with him musically and towards a better world... Imagine that....

If John were still with us what do you imagine he would do and think???

There's no doubt that he died way too soon. It still makes me sad.

I like the drawing. The face in it looks like a mixture of John and his japanese wife Yoko.

I confess I missed a lot of the Beatles in real time, so to speak. I remember them, certainly, but was just not overly interested in them. It was only later I actually began to really appreciate their music and their talent.

I do remember the infamous Bed Ins that John and Yoko had in the late 60s. That was quite a publicity stunt.

I remember a lot of older people at the time (i.e., anyone over 30 in my world at the time) were disgusted with the whole thing and thought John Lennon was a commie, as they called him.

I retrospect, John Lennon was a pretty special talent and, like a lot of such people, were considered odd by many people while he was living.

My daughter gave me a DVD of John Lennon a few years ago and I have always considered it a special gift.

Mark David Chapman was denied parole for the 6th time in Sept of this year. while I agree he should have been I wonder what John would have thought.

It is still a tragic and heartbreaking loss...my words cannot express it. But you have. Beautifully. ~Janine XO

He's very much alive within all of us.

He's as relevant today as he was when he was alive, I think.

WE duet with our posts today!

Warm Aloha from Waikiki, my Friend

It really amazed me, when I read the other day, that Lennon would be turning seventy. He was such a huge figure in pop culture, truly one of the most famous people in the world when he was killed. Hard to believe he was only forty.

At the time I was thirteen, and thought him old.

Note to the Walking Man,

Mark, since Yoko's appeal against his parole was based on her own safety and that of John's sons, I believe that John would have wanted Chapman kept in a place where he couldn't hurt them.

As far as I know, Chapman has never expressed remorse and is clearly crazy so the only real argument, in my view, would be whether to incarcerate him or institutionalize him. And incarceration is safer for John's family.

Imagine how much more he could have done.

Imagine...that song says it all.