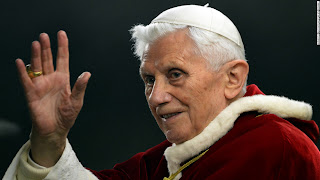 It's not often we have the opportunity to observe history, but we will today when Pope Benedict XVI retires.  It will be the first time in 600 years that a Pope has stepped down from his position. He has pledged "unconditional reverence and obedience" to whomever succeeds him as head of the Roman Catholic church as he prepares to stand down. And when he retires, perhaps now would be a good time for the Catholic church to become part of the 21st century.

When I was getting married, my husband was Catholic and I was required to convert from Anglicanism to Catholicism in order to be baptized in the Catholic church.  Every week, I took instructions from a priest by the name of Father Belanger.  We would have long conversations, and one day Father Belanger said to me, "You'll never make a good Catholic, you ask too many questions."  I was baptized, however, and on the morning of my wedding, Father Belanger was in a car accident and, prophetically, his car struck a part of the Vancouver Island Mountain Range known as Angel Rock.  He survived and officiated at my wedding with a bruised face and a black eye.

The Catholic church has its problems, to be sure, but I prefer to believe that, for the most part, the priests and nuns are good people.  However, an institution as large as the Catholic church, with 1.8 billion followers, has to modernize.  It has to become part of the world in which its followers live.  Folks don't live in the 13th Century, they live in the 21st century, with all the ramifications of life in the 21st century.  Celibacy does not work.  My feeling is that Pope Benedict understood that, and had difficulty with it.  He is one of the more intellectual Popes to have governed the Catholic church.  Pope Benedict's legacy will be his resignation; that in itself is a "modern" act, if you will.  I don't believe Cardinal Joseph Aloisius Ratzinger ever wanted to be Pope, and his predecessor was certainly a hard act to follow.

The next Pope will be facing plenty of challenges.  Hopefully he will be a younger man who has experienced modern life, and has more understanding of the human condition.  And, I hope he asks a lot of questions.

Such a 'to the point' blog today Josie, thank you. Donna

Oh I could write volumes about this but I am not Catholic and will uncharacteristically keep my big stupid mouth shut. But...

I converted too and realized six months later that it was a mistake (even though at the time I thought I was doing the right thing.)

You are right, and your priest was too, when he said you'd never be a good Catholic due to asking questions. They prefer people who accept everything they say and never question their authority. That, in itself, is suspect.

I don't believe that good Catholics don't ask questions. And I don't believe that any church needs to modernize itself to co form with new ethics. If you don't like where the church is, then it's your prerogative to change churches not the other way round.

As for the Pope, he was clapped out before he was elected. They should elect a much younger and stronger man and then it might be possible to bring in more modern ideas like approval of priests getting married etc.

Good post! I would not make it as a Catholic, I ask lots of questions, too.

Well put. I too hope that the next Pope has a better understanding of the world we face today. It's a very interesting time in the life of the world, isn't it? :-)

Great post, Jo! And I had to smile at the priest saying that you wouldn't make a good Catholic because you asked too many questions! I grew up Catholic, went to Catholic schools until college and then, while in college, I started asking a lot of questions and finding that I was no longer comfortable with such a patriarchal church. I've always been grateful for my Catholic background and for the very kind and giving nuns and priests who helped me so much as I was growing up. My inclination in adulthood has been to the Anglican church. When we were still in California, we went to a wonderful church with a female pastor and an agenda of social activism and compassion. We're trying on agnosticism now that we're in Arizona but could be wooed by a good Episcopalian church. I think the new pope would have his work cut out for him. I'm secretly hoping that the cardinal from Ghana will be elected: he's younger and a person of color and has much relevant experience at the Vatican. He might be just the Pope for our changing world.

I married a Catholic and converted. I've always asked a lot of questions. Eventually I left the Church. I wish the retiring Pope a life of peace and his successor the courage to lead a more progressive agenda.

All such thoughtful posts and here I an with an anecdote. My mother converted to Catholicism in her middle age- actually the same weekend that I graduated from high school. Her father was Catholic and he mother was not and she had not been raised as a Catholic. She went to the Inquiry classes and took me along for a few but ultimately her mind was made up and she studied the catechism and met with the priest and was very excited when it was time for her first communion. She had a
new outfit- a lavender linen dress and coat and a white hat.

The Friday night before the big day we were up late. Mom raised dogs and we had a litter of pups. When there were puppies we kept a plywood gate across the doorway to keep the puppies in the kitchen. One of my brothers did something he wasn't supposed to do and annoyed my mom, she reached across to smack him as he nimbly left the room and she forgot the puppy gate. She went down and slit her eye open. She had to get a stitch in her brow and she had a positively huge shiner that no amount of make up could hide . The shiner co-ordinated nicely with her new outfit. We kids were all piled into the front pew to watch mom take her first communion. Afterwards there was a little celebration downstairs in the church hall.The priest I had previously met at the Inquiry classes chatted with us and admitted that when mom looked up at him from under the brim of her hat with her black eye he wasn't sure he should give her communion. We all had a good laugh over it at the time. I must remind her of this when I talk to he next time. Thanks for the memory!