The Difference Between Men And Women... 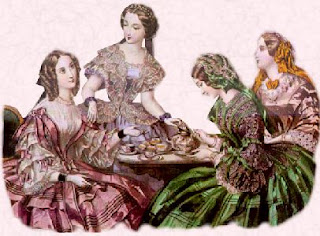 We have a colleague at work who spends at least three-quarters of her day on personal phone calls. I have heard her conduct lengthy conversations with the contractor who is renovating her home, and the rest of the time she is speaking in her foreign language to members of her family. When the work doesn't get done, the rest of us have to take up the slack. It has caused difficulties, but no one wants to say anything. With women, it is usually a case of "shoot the messenger" so we keep our mouths shut. "Sssshhh ... don't say anything; don't rock the boat. If we say anything we'll just look bad and it will get us into trouble. We all have to get along, we all have to work as a team ... blah, blah, blah." So, the behavior continues, and the rest of us suffer in silence.

I was telling my friend Russell about this situation, and he said, "Well, you see, that's where men and women are different. A man would say, 'Hey Charlie, get the f*ck off the phone and start pulling your weight around here,' and that would be that. Charlie would get off the phone and start doing some work." Without being too general, that is the thing I have always liked about men. For the most part, the silliness of women is a mystery to men. For men, the shortest distance between two points is a straight line. But once a gaggle group of women get together, you know some of them are going to start to confuse the issue, in order not to "step on anyone's toes", as it were.

I grew up with two older brothers and a father, and I tend sometimes to think like a man. And, unfortunately, that can sometimes come across as offensive, because I don't sit and weigh all the nuances of an issue, especially if I can see a quick solution to it. I'm not a good "committee" person. Sometimes the answer is staring us right in the face, but women tend to dissect a problem, whereas a man will say, "Let's just get this done." I suppose the difference between men and women in this regard is some biological thing that has evolved in us for some particular reason, and it does have it uses ... I guess. I just find it very frustrating.

Today I am in just the frame of mind to say, "Hey, Little Miss Sunshine, get the f*ck off the phone and start doing some work..."
Posted by Jo at 8:18 AM

I think like a man a lot of times, but then I'm too afraid to actually say anything. Frustrating!

There is much to be said for the direct approach. the other approach tends to cause much more negative feeling over the long run than just getting something out and over with.

On the other hand men started almost every war the world has ever known when women would have solved the problems over a box of chocolates.

Jo wrote:
""Sometimes the answer is staring us right in the face, but women tend to dissect a problem, whereas a man will say, "Let's just get this done." ""

Dissecting a problem is a great thing sometimes. You THINK before you ACT. Love this about women .LOL

Sparkle, Oh, yes, I am thisclose to saying it. *heh*

IP, yes, that is the good thing about men, they don't "mind".

Mia, oh, goodness, I think you have never worked in an office full of women. They never solve anything over a box of chocolates, and they can make World War II look like a day at the beach. :-)

IP, and sometimes things can be over-thought. I like the direct approach.

Yes. I would say and have said "Hey, Charlie, get your fucking ass over here and give us a hand!" or "Hey, you son of a bitch, put the phone down before I shove it down your God damn throat!"

That is just fucking stupid!

I think you should just say a more diplomatic version of what Russell said. "Sorry to bring this up, but you're spending too much time on personal phone calls and the rest of us are picking up the slack." and let the chips fall where they may.

After all, you only have to work with these people, they aren't your nearest and dearest with whom you must maintain a lifelong relationship.

Just drop the bomb and get it over. Rip the bandaid off. Or complain to her superior, and let that person handle it. That's probably the best solution, actually. Whoever that person is, they are actually being paid to handle this sort of thing.

If she needs to make a bunch of personal phone calls, there's this thing called a lunch hour, or a break.

Don't you have a supervisor or office manager? Bring it up with him/her!!! Let her do the dirty work. After all, it is his/her job to supervise!!!

I think I have some very unfeminine tendencies. I've never had a problem telling my slacker coworkers to get to work.

Gosh, I must have lots of testerone. I would simply disconnect her call and tell her it is rude to talk in another language, everyone will think she is talking about them......... What is she going to do, tell on you? Then she would be telling on herself....

Again, I am glad I am no longer in the work force. I tend to back off and stay away from confrontation. And then I blow up all at once and everyone is mystified. Better to go to the office manager and get this straightened out from there.

Oh, my...how can Sunshine do that? That's like stealing from her employer! My husband and I own our own business...heads would roll...LOL...Sometimes, direct is most kind. Very thoughtful post! ~Janine OX

She's going to keep on doing it until someone higher up says something to her. Of course, if it's someone who is equal to her (in position), she'll just think they are a b*tch. But what the hey!

I think that you're right to an extent, it is usually the case that men are more straightforward. But I think there are always those who don't want to "offend anyone" and those who just want to get the job done, irrespective of their gender.

Well now I want to know how it gets handled...You've certainly gotten plenty of tips on how it could be approached.

Are you going to be direct, Jo, or follow the chain of command?

I'm in favor of that. It beats the passive-aggressive "solution" of the rest of the staff not taking up her slack, but it's true that women are socialized to be pleasers, which means never saying or doing anything disagreeable, even when one is right.

I am a big fan of fairness, though, and it is simply not fair that she gets paid for doing less work, and that everyone else must do more to make up for her.

Jo, I would complain to a superior or talk with her. I had a similar situation at work where one of the employee was constantly coming late or leaving suddenly because of family situations.Being her boss I told her that I had full understanding that certain family situations can be demanding but that it was effecting her work and if she needs so much time off, I have to see a valid documentation by a doctor for leave of absence. She got her act together.

Sometimes we really need to confront the person. Such behaviour really gets my goat. I cannot stand such people who lean on others in a surreptitious manner.

I usually take the direct approach. And in thinking about it...I have a lot more male friends than female. LOL

I've got the same problem, my two older brothers made a no nonsense person out of me. I like to take the direct path and even though I am a Libra, I can be pretty straight forward.

:D When it comes to meetings or Soirées, I tend to stand & talk with the men, women are to 'girly' for me.

BTW, just do that tommorrow, tell her to do something & move her phat a**e. ;)

Most of the women I have worked with would have said that...way before a man would have. Women are usually a lot harder to get along with I think.

Little Miss Sunshine seems to be employed in multiple places. We certianly have a couple of them in my office. Jo you just have to have that "look" when you pass them by..they hang up immediately. Of course walking by and cutting their phone line might help also. Grin

I'm with you, Jo! I would tell her to get the f*** off, AND I would report her to the boss, too! I think that it is largely a matter of learned behavior and social conditioning, but who knows, for sure, why some women put up with such antics?

Well Jo, I am constantly accused of being too **** blunt, and that does get me in trouble quite often. I would encourage you to tell her to get off the phone, but I don't have to work with her, you do. Whatever you decide you are the one most likely to suffer the consequences of her wrath, can you bear that? Good luck Jo!

Aww hell she knows what she is doing and she is taking advantage of all of your reluctance to cal her on it. Why pay the piper of you can dance for free?

As I was reading your blog... my mind was saying.. yep, that's why people like to have me around sometimes, cause I tend to think like a man and, unfortunately, talk to f*ck-ups in a rather blunt fashion.
And then you said you had the same problem...

However, in this situation... I might tend to work a little overtime and screw up her phone.

Wow, I know your workmate - ok, not really, but someone(s) just like her. And my husband complains about the woman who sits opposite his cube... same reason.
And for every workmate like her, I have 10 who AREN'T like her. So the dilemma continues!

I just stumbled on your blog and read this post! OMG!!!! This is SO true! Being a woman and even though I grew up in a household with more women than men, I often think like a man too..."Let's just get this done". And yup, that "straight approach" has been my downfall at times too! I'm not a good committee person either.

If push comes to shove, I would rather spend time in an all men's group than all women's any day! Women get nit-picky and it sounds like chickens together!!! LOL!