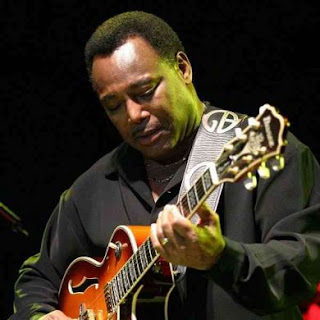 Occasionally, -- every once in a blue moon, as it were -- the stars and the planets line up just so, and everything goes perfectly. That's how it was this evening when Lulu and I went to see George Benson. We went for dinner beforehand, and found a parking spot right in front of the restaurant. We had a wonderful dinner -- with dessert, thank you very much. Lulu says she likes going for dinner with me, because I am adventuresome and will try any kind of food -- Chinese, Indian, Japanese, Italian, Greek... Well, yes, I have never found a food I didn't like, except perhaps rice pudding.

We got to the theatre and parked for free in the building where Lulu works -- which just happens to be right across the street from the theatre. Our seats were the best seats in the house, and George Benson was even better than the last time I saw him. He's mellowed somehow, and has a richer, deeper sound. He did a solo of "Danny Boy" that was one of the most versions beautifuls I had ever heard, and was quite haunting. For a few moments I thought perhaps he was playing it for my friend Sherry, over there at her final rest in the glens of Scotland ... the pipes, the pipes are calling, from glen to glen, and down the mountain side ...

Vancouver audiences are known for being fairly raucous, but Benson didn't seem to mind.  I think he played into it.  What better way to spend a Saturday evening than Breezin' with Benson.

I did manage to video some of this evening's performance, but the videos take forever to upload, and I'm not sure whether I have permission to share them on my blog, but here's a teeny video of our great seats. George Benson, one of the greatest jazz guitarists ever.

How absolutely wonderful to have a night like that. I am so glad that you and Lulu enjoyed Benson, he's also one of my favorite artists. Thank you for taking me along.

No matter how I feel abou jazz, the cat is cool...And he collaborates with so many big name rock groups and even the late Chet Atkins! Benson does country back-up as well? The mind boggles.

I love it when the 'universe' smiles down an orchestrates a perfect day - so happy for you! Benson is awesome.

I don't think there is a problem with posting an excerpt of Benson's performance unless of course there was an accompanying notice issued with your tickets or at the venue via sign or program stating no taping.

I posted a very short video from a Paul McCartney concert and it was removed in minutes. But McCartney concerts specifically warn you not to bring cameras or any kind of recording device. And I'm sure Paul has better lawyers than George Benson.

If you post the video the worst that will happen is it gets deleted.

What an enjoyable evening! I would have loved it.

Oh it sounds like the most wonderful evening, Jo! I'm glad you had such a good time, and thank you for sharing the Benson video - that was a true delight to listen to :)

Sounds like a most perfect evening, it's great when everything falls into place and makes for a really smooth delightful time and I am sure it was, with the rich tones of George Benson. I saw him on breakfast television just recently and I agree his voice seems even more mellow. I shall go right now and put on some of his music. Best Wishes.

Hi Jo :)
Wow, your page looks beautiful! I've been away so long and everyone I visit has a new and gorgeous look! Love the drawings you have done :)

Back in the '80's I used to listen to George Benson all the time. He has some beautiful music and lyrics too :)

Good to see you again. I hope all is absolutely Wonderful in Jo Land :)
Hugs and Well Wishes :)
xo
Kelly

Wow! Totally awesome! A night out on the town like that is definitely what I need. George Benson. Even my husband came in to listen, and he goes, "Aww, Is that all?" lol Thanks for stopping by me too. I want a pair of those flip-flops for the summer too. They are so comfy.

What a glorious evening you and Lulu had. I'm sure it was wonderful for George Benson and Co. too. They sound as fantastic as ever -- thanks for sharing. Such great seats, too, you lucky girls.

There are so many amazing foods in the world, I have found that it is quite possible to get through life w/o eating rice pudding more than once.

Well, Mike & I are officially jealous :) Glad you had a great time.

Fabulous evening. I love it when things just clicked. I'm so happy to hear you had a great time.

Wow, you're so lucky!

Back in 1977, a friend of mine worked for a jazz radio station in Cincinnati, Ohio. He got to meet George Benson, and Benson gave him two prime tickets to the show.

Lucky me - my friend (Clyffe) called me up and invited me to be his guest. I sat next to Benson's manager during the show and went to the after-show party.

During the show, George called out to the audience to have all the handsome people stand up. Quite a few stood. Then he called out to have the ugly people stand up, and Benson's manager and I were the only two who decided to stand up. It created quite a laugh because Benson recognized his manager, but not me. So, he just told his manager over the microphone that '...boy, now you found a cutie in the crowd'.

George is a very modest and sincere person, so I was glad to see he's still touring and still singing/playing so well.

I do have a signed album from him that I got that night - 33 years ago.