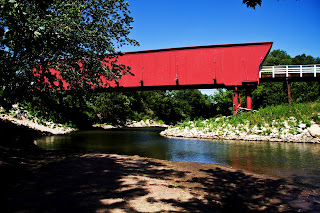 This lovely photo is the Roseman Bridge in Iowa, and the picture was taken a few days ago by my friend Russell. The bridge is featured in a movie called “The Bridges of Madison County" starring Clint Eastwood and Meryl Streep. Everyone who has read the book or seen the movie is familiar with the story. It is the story of Francesca Johnson, a well-educated Italian woman with a love of music and the arts, who is married to a farmer in Madison County, Iowa, in the 1960s. She has two children, and the main purpose of her life is to be wife and mother, but her husband and children do not see her. She is stuck in her kitchen, listening to country and western music, when she longs to listen to classical music. She is unfulfilled and has accepted her life.  She has shut down. 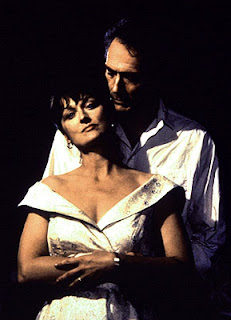 One weekend, Francesca’s husband and children go away to the Illinois State Fair, and Francesca by happenstance meets Robert Kincaid, a photographer for National Geographic Magazine, who is in Madison County on assignment to photograph the bridges. She leaves a note at the bridge, inviting him for dinner, and he and Francesca become friends and then lovers. Robert Kincaid sees Francesca as a beautiful sensuous woman, rather than a plain housewife, and he has brought her to life again. It is wonderful to see Francesca blossoming in her new-found love affair with Robert. She slowly unfolds from being an uptight housewife to being warm, affectionate, sexual woman.  Sadly, at their end of their four-day love affair they part and Francesca remains devoted to her family, but she and Robert remain spiritually connected forever. When she dies, she requests to be cremated and have her ashes sprinkled from the Roseman Bridge.

It’s a wonderful story, and I have always felt an affinity for Francesca. I think most women can. Women make compromises all the time, and often have to invent who they are in order to please the other people in their lives. Even now, in the 21st century, that still happens. For Francesca, those four days of being herself were enough to last a lifetime.

In a way I feel sort of a connection to the Roseman Bridge, and it holds a special meaning for me. Not only did my friend Russell take this lovely photograph of the bridge, he also at one time met the author of the book, Robert James Waller. And on the day I found out that my daughter was expecting Phinnaeus, I decided to celebrate by treating myself to a movie.  The movie I went to see was “The Bridges of Madison County”. It was a beautiful warm summer evening in 1995, and I was very happy. Phinnaeus was born a few months later in February 1996.

And now, to come full circle, I have started to do a little watercolour pencil drawing of the bridge. I am hoping to visit it one day.
Posted by Jo at 11:14 AM

Oh Josie! This just gives me goose bumps recalling the wonderful and sad story of Francesca and Robert. When she & her husband were stopped at the light, I kept muttering "Go! Go to him!" But I also felt for her guilt that she would hurt her husband so much when he was truly a good man. The plight of love, eh?

Having been born and raised in Iowa, I have an affinity for the covered bridges as well as all the other wonderful craftsman architecture, the barns, houses and sheds all created with an eye to serviceability. The love story depicted in Bridges of Madison County is a bitter-sweet one which is only paralleled by the fact that it was written by a man. I recall having lengthy discussions in my then work environment as to the appropriateness of Francesca's decision. All these years later, I still hold regret that her life seemed to be tied up inside that one, sensual week. Great post!

I read the book and also saw the movie, but have never been to Iowa. It makes me a bit sad that women often need a man to release their inner selves, to allow themselves to be who they really are. So much better if we could find ourselves first and then meet the right man (or woman.) I think this may be why so many young marriages fail because people haven't yet figured out who they are.

Part of me really wanted Francesca to go with Robert, but since I couldn't imagine leaving my own children, I understood her choice, albeit sadly.

What was heart wrenching in Bridges is that the husband was not a bad man, he just had come to take Francesca for granted.

Merrill Streep was brilliant, as always. Oddly, Clint Eastwood was too, even though he wan't gunning anyone down. That scene near the end when she has her hand on the door handle in the truck was gut wrenching.

But the question that this story asks, do you throw away almost two decades of marriage, and destroy your family, over a fling?

It doesn't make for great reading, but is it not best to avoid the fling to begin with?

This book did three things for me, 1) made me appreciate my wife, 2) inspired in me a love for covered bridges, 3) gave me an awareness to shut a door gently, don't let it bang...

"She watched him go through the kitchen doorway, across the porch, and into the yard. He didn't let the screen door bang like everyone else did, but instead shut it gently."

I read the book a long time ago, when the movie came out, and what do I remember? To gently shut a door.

I loved reading The Bridges of Madison County, and I hope you post your finished picture Jo. :)