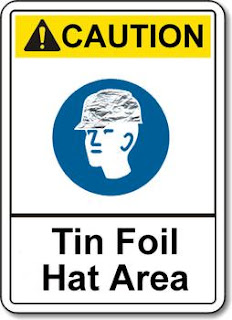 Normally, I do not subscribe to conspiracy theories. I don't believe Princess Diana was eliminated by little grey aliens because she discovered that Elvis killed JFK, and he and Marilyn buried the body in Area 51, close to where all six moon landings were staged. And I don't believe the World Trade Center disaster was an inside job by the Illuminati. I mean, really, come on... Conspiracy theories are really just ghost stories for adults. Everyone loves to be frightened by things they cannot explain -- never mind the fact that for each and every conspiracy theory there is a valid, scientific explanation that can be proven. But, don't tell that to the conspiracy theorists. You would ruin their fun, and probably put Snopes out of business. People love to believe their lives are being run by aliens, or strange dark figures lurking in the background. It makes people's otherwise mundane lives seem so much more interesting. No one wants to believe that about 99% of the world's population just goes about the business of living their day-to-day lives. Believing that we are being manipulated by other people -- like puppets -- makes it all so much more fun. Conspiracy theories and conspiracy theorists will always be with us. According to one of Newton's Laws of Motion: To every action there is always opposed an equal reaction: or the mutual actions of two bodies upon each other are always equal, and directed to contrary parts. In other words, all major world events will have a conspiracy theory. It just goes with the territory. 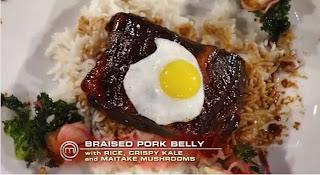 What was the deal with MasterChef the other night?  This is a picture of the actual winning dish.  How did a bacon and eggs trump a beautiful rack of lamb with green curry sauce.  I mean really, come on...!  Christina Ha's dish was Vietnamese comfort food -- definitely not haute cuisine -- while Josh Mark's dish was beautifully executed and presented.  Christine's dish was cooked in a pressure cooker.  Really, judges?  A pressure cooker?  On MasterChef?  I believe the judges wanted Christine to win right from the start.  What a great human interest story, and wouldn't that sell cookbooks.  I also believe Josh was brought back to be the perfect foil for her to win against -- an even better human interest story.  The only problem with that was, as far as gourmet cooking is concerned, Josh out-cooked Christine in the final challenge, and the judges had to work very hard to find anything wrong with his dishes, praising his sophisticated menu, his sauces, his imagination and his presentation.  But in the end, Vietnamese comfort food won the challenge.  They should rename the show YourMother'sHomeCookedCornedBeefHashChef, not MasterChef.

I didn't watch the show but I can't think of a less appetizing looking dish than that one...really?

ghost stories for adults - you are so smart, JO!

another example of predetermination.

LOL! I did not see the show, but anything termed "comfort food" has my vote. ;-D

Well, it has bacon in it, so I dislike it already... *gags*
But maybe the judges thought she had a more juicy look then the guy she was cooking against. Ergo, the chick with the Bleh-Menu wins.
That is how the World works these days.

And one thing about Conspiration Theories.
To be honest, I believe in some of them, because when the "True Fact's" aren't working in RL, there must be something fishy... :)

It was a plot by Mark Zuckerberg to get share prices up, however Google caught wind of it disabled a feature on several million Android phones, but was ultimately foiled by Apple's suit against Samsung. It seems that Samsung used a rectangle for the basic shape of their phones and Apple had bought up the patents for the rectangle with an accurate paper trail that led back to the ancient Greek Inventors of the rectangle, yes sir re Bob, the rectangle was invented, not discovered, (show Apple a natural rectangle--ergo it was invented and Apple holds the patents). The day was almost saved by a user on Twitter but his message was 141 characters and blocked and as such the vote failed to make it into the producers of the show and the lousy dish to which you referred won by a substantial but curious margin that me thinks just may have been the result of Russian underworld figures releasing a worm into the net. Norton almost stopped it but Microsoft simultaneously released an update for Windows which counteracted the Norton fix and resulted in the free reign of a malware bug. The CIA foiled the attempt but failed to notify the NSA which shut down all mainline phones for a microsecond just long enough to affect the vote but not long enough to make anyone suspicious.

LOL, I think a lot of those cooking shows are fixed. Hell's Kitchen is on the top of that list. We love to watch The Great Food Truck Race.

Obviously the Masterchef franchise is world-wide now. I always thought it was a little British show from the 1980's! I agree - it's usually a fix. I must see if I can find your version on You-tube.....