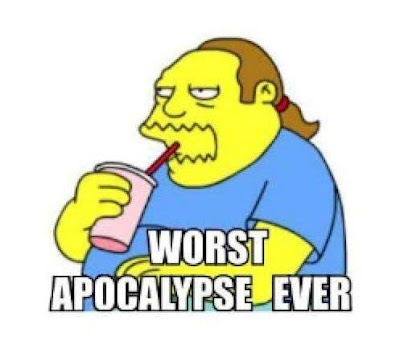 When I was a little girl, our family lived next door to some folks who belonged to a particular religious group that constantly believed the end of the world was upon us.  They carried a sign on the roof of their car that said, "The End of the World is Near".  I lived in a state of anxiety mixed with terror all the time.  No reassurances from my Mom and Dad would ease my fears.  Finally, when I was seven years-old, my Dad had had enough, and we moved to another neighbourhood, and I was able to put that nonsense out of my mind.

How many people, I wonder, have been living in that state of fear and anxiety over the past couple of years, since the Mayan calendar was discovered to be ending on December 21, 2012.  People have been building underground bunkers, and other means of "survival" -- like the folks in "Blast from the Past".  They stayed there for 30 years and didn't realize that life was still going on as normal above them, until their son Adam decided to venture outside.

Adam: Say, mom?
Helen: Yes, dear?
Adam: I was wondering, you know, while I was up there and all, I was thinking, well you know, I was wondering if maybe I could meet a girl? I've been thinking about that a little. Just these last fifteen years or so.
Helen: Oh Adam, it would be wonderful if you could meet a girl. One who's not a mutant and hopefully comes from Pasadena. Nothing against Valley girls but in my day anyhow girls from Pasadena, I don't know, just always seemed a little bit nicer.

I guess you could officially now call this the post-apocalyptic world.  But, relax, have fun.  It's Christmas, a time for enjoyment.  However, do be careful.  Mutants do exist; I have met a few in my lifetime ... I think.
Posted by Jo at 9:56 AM

What happened? We didn't get compacted into a singularity? Someone miscount begats again? They probably blew a fuse at CERN. The end of the world will resume after the holidays.


Seasons Greetings to all.

We were laughing at the news last night after waking up in the morning saying, "Whew! We're still here!" LOL

I can't believe people were dumb enough to believe it...lol.

Liked your cartoon. How did you spend your last night of the Earth that didn't happen? Nothing that you would regret now that it didn't happen, I hope?

So amazing all these false alarms! I very much remember one time when the possibility of the end of the world seemed real: the Cuban crisis in 1962. Of course, being a teenager at the time, I was running around not only scared, but also miffed that I could die at any moment without ever having had a boyfriend!

I delayed buying the turkey!
Bought it today! lol!
Merry Christmas my dear to you and yours from me and mine xxxx