Asteroids and Meteors and Comets, oh My... 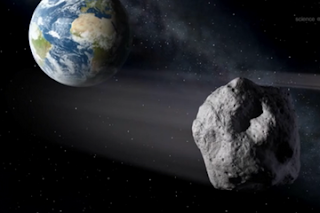 The odds of two celestial events happening in one day over our earth are one hundred million to one.  And yet, yesterday they happened.  Scientists have known for several months that Asteroid 2012 DA14 was heading our way, and would pass very close to earth, missing us by 15 minutes.  But no one expected the meteor shower over Russia, just hours before DA14's arrival.  That meteor caught everyone off guard and injured over 1,000 people.  On the NASA website: "According to NASA scientists, the trajectory of the Russia meteor was significantly different than the trajectory of the asteroid 2012 DA14, making it a completely unrelated object. Information is still being collected about the Russia meteor and analysis is preliminary at this point. In videos of the meteor, it is seen to pass from left to right in front of the rising sun, which means it was traveling from north to south. Asteroid DA14's trajectory is in the opposite direction, from south to north."  Can you imagine if they had collided?  What would be the odds of that? 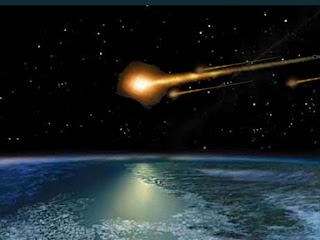 Every day the earth is hit by several thousand meteors, most only the size of a grain of sand. Occasionally they are larger, ranging in size from a baseball to a kitchen table. Approximately once a week we are hit by a meteor the size of a car, and a few times a year we are hit by one the size of a house. Most of this space debris burns up when entering the earth's atmosphere, but occasionally someone on earth will get hit.  In 2009, Gerritt Blank, a 14-year-old boy in Germany, was hit by a meteorite the size of a pea.  It knocked him flying and left a foot wide crater in the ground.

Just over 100 years ago, a meteor exploded over Tunguska, Siberia, causing an explosion the size of a nuclear bomb. And, there is a theory that the legend of Noah's Ark was created from a tsunami caused by a meteor that struck the Indian Ocean.

We're sitting ducks here on our little blue planet.  The good news is that if anything of substantial size comes our way, we will be forewarned.  If we can do anything to detract it remains to be seen.  We'll just call Bruce Willis.
Posted by Jo at 12:06 PM

Not a lot we can do about it really, other than all wear hard hats and carry banners saying, "Prepare to meet thy doom!" The meteor in Russia was about the size of a bus apparently travelling over 33,000 mph, so that particular bus did not hang around and was well ahead of the time table.

It may be that we don't get another instance for a million years but we may get another tomorrow - who knows?

Oh joy. Now I have to find the time to watch and worry about stray asteroids and celestial garbage striking.

While certainly a more mundane death than being struck by a meteor, ergo far less frightening, one is just as dead and the chances are far greater.

Remember when driving down the road, keep an eye on the road, not the skies.

You see Jo! We are all here to live another day LOL.