I Want Hugh Laurie Back...! 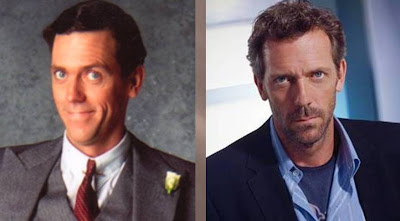 Help...! My favorite comedian has been kidnapped and is being held hostage by an American television studio. I believe they're paying him staggering amounts of money -- he's the highest paid actor in a TV drama -- but they've turned him into someone completely unrecognizable.  They've taken away his sense of humor, his lovely British accent, his mischievous twinkle in his eyes, and they have turned him into a hopeless drug addict.

According to the folks at Wikipedia, "House is critically acclaimed and has high viewership ratings. It was among the top ten rated shows in the United States from its second through its fourth season; in the 2008–09 season, it fell to nineteenth overall. Distributed to 66 countries, House was the most watched television program in the world in 2008. The show has received several awards, including a People's Choice Award, a Peabody Award, two Golden Globe Awards, and four Primetime Emmy Awards. The finale of the show's sixth season aired on May 21, 2010. House's seventh season will premiere September 2010." 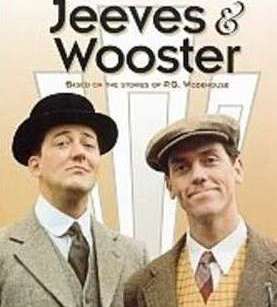 When the show was first announced starring Hugh Laurie, I was looking forward, with great anticipation, to watching it. Hugh Laurie is amazing, and before "House", Hugh Laurie was known in Great Britain and Canada, and thoughout the rest of the world, as a brilliant comedian. He was wonderful.  So, I kept waiting to see some of his comedic brilliance in "House" ... but ... nothing. According to A.A. Gill of The Sunday Times "...the show had "lost its sense of humour". The Chicago Tribune's Maureen Ryan wrote, "House used to be one of the best shows on TV, but it's gone seriously off the rails".

Apparently, in 2005 Hugh Laurie appeared on the cover of TV Guide as "TV's Sexiest Man". and in 2008 House was voted second sexiest television doctor ever, behind ER's Doug Ross.  Bertie Wooster...?  Sexy...?  Well, that depends on how you define sexy, I guess.  A hilariously funny, brilliant, charming, bumbling idiot, yes.

"Dr. House, please crack a smile occasionally -- even just a little one."

Stephen Fry and Hugh Laurie as "Jeeves and Wooster" in their first trip to America.

Okay.. I first say Hugh when I discovered Fry and Laurie and then latter feel in love Jeeves & Wooster. But I also love(d) House. I confess I only watch re-runs so I haven't seen the 2009 season yet, but I think the character is one that shows what a wonderful actor he truely is. House is a hard character for the audience to love, and they love him because he is played by Laurie.

Hugh played non comedic roles long before House. They just weren't widely viewed. Have you read his book? Gun Seller... its one of my faves.

Hugh Laurie is also a terrific musician, and does occasionally get a chance to show his chops on House. He is an incredibly talented actor, and I agree that he is being severely underutilized in the series.

Another actor who sold out to Hollywood, in my view, is Johnny Depp, who is a marvelously talented actor with Al Pacino's intensity. I always admired his insistence on doing character roles rather than capitalizing on his extreme good looks, but the Pirates movies were atrocious. They also made him, finally, an A-lister with enormous power in the industry, and provided him with a huge income. It's hard to blame actors for going for the money - they are people too, often with families, but it's still sad when good artists go bad.

I had no idea he was so well known. I really like House, but have to admit to watching it on DVD, usually on the treadmill. I haven't been really happy with the dope addict character.

I know Laurie only in "House" and I really don't like his role - always grumpy, moody, sarcastic - it's not what I think a doc should be, and thank heavens, the many I know in reality are not like that personage, but it's good to know that that is not how the actor is like!

I totally concur and I reflected the same sentiments in my post http://lgsquirrel.wordpress.com/2009/11/26/a-brave-new-adventure/ . It may surprise you to learn that I had some comments from fans of House who basically said that they like him in that role and that we can't have him back.

"House" became WAYYYYY tooo heavy for me and I pretty have dumped it from my personal lineup of shows.

I don't mind him being grumpy...brilliant peeps are sometimes grumpy :) so that's OK. What I don't like is House being a big, fat, rude JERK!

No hospital, brilliant doc or not, would put up with his crap.

Nope...they llost me after season 9.

On to better shows...I can always find great stuff on PBS! hahahah

I really enjoyed the clip, it is a lot of fun! Wish I could see some episodes.

My grandmother's onocologist was darn near like House. A medical genius and total donkey.

The hopital put up with it too...

I have watched HOUSE since day one. I must admit I love his character as it is beautifully written. He's not your standard television doctor. His demons are so real and painful to watch sometimes, but his character is brilliant.
Honestly, I have not seen him in a comedic role in a very long time. None the less, the US will keep him!

I've watched House reruns a time or two, but the show doesn't appeal to me. It's hard for me to understand why anybody would watch this jerk that Laurie plays and love him, but there's no accounting for taste...

I think he's wasted in this role, too, Jo!

I confess I only know Hugh Laurie through his House role. As a second confession, I admit I have only see a few of the early shows. In fact, I am watching the second season now.

I think his character is absolutely wonderful. House is edgy, witty, goes against the grain and, above all, really cares about his patients.

I work in a college and I, too, find myself going against incompetent administrators and various nonsense much of the time.

Unlike House, I am not as nice nor as brilliant as he is.

Of course, his character is based on Sherlock Holmes. Very good show.

I first met Hugh Laurie in the brilliant Black Adder shows - oh my word the hilarity! He always played the exact opposite of his House character - sweet, a bit (a lot!) dim, bumbling.

I've only watched House every now & then, & I like the detective aspect of it. But it's too stressful for me in general. I like how well received Laurie has been in the show - but it would be nice to see some comedy too every now & then!

I only know Hugh Laurie from his role as Gregory House. I love this show and I love Laurie in the role. House is a complicated, flawed man. And the brillant doctor seems afraid to let us see his softer side. But no doubt, that side exists. Laurie is a wonderful actor...capable of saying so much with just a facial expression. And I love his relationship with Wilson. Dr. Watson, I presume?

i can see why you are devastated by
laurie's transformation to curmudgeon.

it must be loads of fun for him to play
a character so unlike his comedic one,
and that grumpy drug addict has made
him a very wealthy man.

but, enough is enough!

I never cared for "HOUSE" but Mr. Laurie was a favorite bad guy as one of the dog nappers in 101 Dalmatians.
And his appearance in the SITCOM "Friends"
Not "Monty Python " but, very funny.

I read your post to my hubby & we both laughed & enjoyed it so. The vid clip, too.

We only know Laurie from House & i can't say i love him there. I do find him a jerk. Not sure why we continue to watch.

We will have to look for some of his other stuff out there as we so enjoyed this clip.

I've been a fan of Stephen and Hugh all my life. They are both brilliant comedic actors, and it is so sad that so many people are completely unaware of Hugh Laurie's sparkling career in British comedy. "Jeeves and Wooster" is a marvellous series, so witty and so clever, as is there sketch show, "A Bit of Fry and Laurie".

Sorry for the theft, dear :(

I didn't know of Hugh before House I confess. My brother and my husband both sort of rebel @ watching the show, say House is an A$$. I reply (not too nicely I admit) I know he's a macho pig but I fell really comfortable with the man. They both look stunned for a second and say HEY!!!!!!
This is a true story BTW.
I didn't know House was based on Sherlock HOlmes but since I'm like the only person to have gotten and read the entire Conan Doyle collection @ an early age I now see why I like House SO much!! LOL

I am utterly fascinated by Hugh Laurie. I could never, ever watch "House" (people both bleed AND throw up on that show I've been told), but I am riveted by every ad that I see on TV for it. Cannot take my eyes off of him. He might well play a drug addict (not that I know...) but he's an incredibly charismatic fellow.

I just saw Stuart Little the other day and I was surprised to see Hugh Laurie in it. I have seen it before but I didn't "know" him until after House came out.I had forgotten all about Jeeves and Wooster!

Black Adder and Jeeves $ Wooster are two of my all time Favs. I like house, but could do with a little of thePrince Regent screaming SOX, SOX SOX. He is a brilliant comedian.