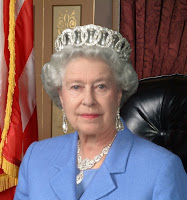 This past couple of days I have been ill with the worst cold/flu that I have ever had. I can't remember being this sick for ages. All I could do was sleep, and I had the strangest, feverish, delirium dreams. In one of my dreams, Queen Elizabeth was visiting me, and she asked if I had a Boots catalogue.  Boots is a pharmaceutical chain in the United Kingdom.  Anyway, for whatever reason, the Queen wanted their catalogue.

"You don't need their catalogue Ma'am, all you need is to go online and you can buy anything you want off the Internet...  Here, let me show you."

And I proceeded to set up a computer and to show the Queen how to use it.  She was amazed.  In real life, I would imagine the Queen not only knows how to use a computer, but in fact uses it on a daily basis, especially to e-mail the various members of her large family.  But dreams are not within the realm of reality, are they?  Anyway, it's always fun to spend time with the Queen.  She's actually quite a character, once you get to know her. 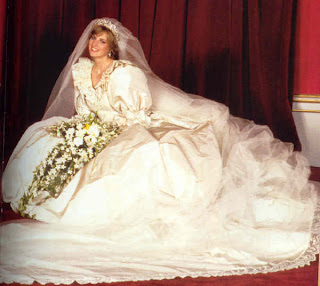 Today is the 13th anniversary of the death of Diana, Princess of Wales, when the Mercedes in which she was riding slammed into the 13th pillar in the Pont de l'Alma road tunnel in Paris.  And no, I don't believe in conspiracy theories.  I think Diana's death was the sad ending to a sad life, an unfortunate accident when an inexperienced driver was speeding through a tunnel, driving a powerful car he was not experienced enough to handle.  If Diana had been wearing a seat belt, she would have survived.  She had been hounded by the paparazzi, but it had become almost a symbiotic relationship.  She knew they kept her in the public eye.  She loved being the most photographed woman in the world, and often tipped them off when she was going out. 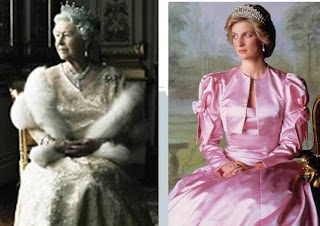 Princess Diana would be 49 years old now if she were alive. What might her life have been like if she had lived and stayed married to Prince Charles? When Diana married him, everyone thought she had caught the brass ring, but really her life would have been simply that of a Lady in Waiting ... waiting to become Queen. If the Queen lives for another 20 years, which she could possibly do, given the longevity of her mother, Diana would be 69 years old when her husband ascended the throne.  The Queen will not abdicate, nor will she skip over Charles and "appoint" Prince William as her heir.  She considers herself annointed by God, and as Prince of Wales, Charles is annointed by God as well.  Perhaps once the Queen passes on, the Monarchy will become irrelevant, but somehow I think they will be around for a while.

How wonderful of you to think of the Queen while you were so sick. I myself would probably have dreamed of the Queen in Alice in Wonderland. Nice post, and boy am I glad you are through the worst of the flu. I haven't been that sick for many years, but you reminded me I am in no hurry to do it again...

I'm so sorry you were sick - take care of yourself & don't try to run any marathons yet!

That is a very funny dream about the queen - I'm glad you were able to help her!

I remember when Princess Diana was killed. What a sad time for the world, and especially her young sons. However, if she'd been home with her young sons, she would probably be still alive today.

IMHO, that is where she should have been.

I'm sorry you've been sick. Last night I dreamed I was in a youth ward, and they all had phones, but no one knew how to use it, and I couldn't call my sis to come and get me. Dreams can be really strange!

It's funny how when we're sick, the dreams become so much more detailed. Maybe we go into a deeper sleep?

It's hard to imagine Di's life ending any differently than it did. She was so young when she and Charles married, she really had no idea what she was in for, and didn't have the life experience to cope once she caught on. It's painful to watch the images from their wedding now, knowing how tragically it all ended.

Take care of yourself, Jo!

Everything you shared is so true. In addition had the driver of her car not been driving under the influence maybe, just MAYBE he would have had his head about it and would not have driven so fast or so reckless.

I am two years older than Diana would be had she lived. She is a good, constant reminder to me that all that glitters is not gold...not even the brass-colored ring that sometimes catches my eye.

At least you did something useful in your dream. In mine I was aimlessly circling the aisles fo WalMart, unable to find the check out lines. I am certain the Queen appreciates your efforts!

I love your dream, Jo, so charming. I bet she's delightful. But I'm under the impression Her Majesty is already well-versed in a technological sense - why I even believe she has a Twitter and a Flickr account.

You're right, of course. The Monarchy is here to stay, though we may moan about them often and, sometimes, just sometimes, there is a danger of a republican uprising, the truth is, we'd be lost without the Royal Family.

And I hit publish before I had even wished you health! Hope you get well soon, Jo, a few more dreamy encounters with Queen Lizzie and I'm sure you'll be right as rain :D

so sorry you have been that sick!
your dream sounds a little delirious.
you must have had quite a fever!

i was completely enamored with
princess diana, like most women
my age. what a tragedy.

It doesn't surprise me that you are helpful even in dreams. I love to sleep because my dreams have always been vivid, though quite random!

I'm sorry you're feeling so crummy...maybe you can put a hex on that germy doctor:)

The Queen, no doubt, WAS pleasantly amused by your dear assistance.

Anyone from Detroit will tell you that the Monarchy is undoubtedly irrelevant. Other than that pesky cold/flu, how have you been? Hope you feel better soon. The years seem to be rolling by.

Jo, I popped into Buck House this morning and Lizzie asked me to thank you for your PC guidance.

However, she's still trying to get to grips with the on/off button and is in need of further help. I said you give her a bell on the dog and bone when your cold/flu has abated.

Jo I love reading your blog!! What fun you have! Not being sick obviously, but I long for a visit from the Queen... you lucky thing!!

And the next thing you'll be telling us is that you, the Queen and Hilda are Facebook friends.

Glad you're getting better.

I had my worst flu ever earlier this year myself. It sucked.

Everyone I know has had the flu this spring and summer, strange kind of cold like symptoms, all lasting about a week or less. So, you dream of Queenly things during these times. Great post.

Sorry you've been feeling under the weather Jo. There's nothing worse than having a cold or flu in the summer.

Hard to believe how many years have passed since Diana's passing. Lovely photos that you included in your post.

I'm certainly glad you showed her Majesty how to shop on the Internet - what an interesting dream.