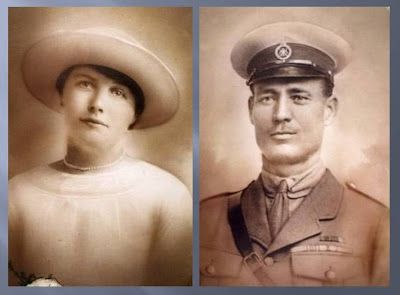 These are my grandparents. Like every little kid, I adored my grandparents. Granny always smelled of raspberry jam, and gave me big, smothering, hugs. Granddad always smelled of pipe smoke, and was very stern, but I learned a lot of things from him. They ended up in Canada eventually, by an interesting circuitous route. My grandmother was born and raised in South Africa and her family owned a vineyard in the Paarl Valley. She was a descendent of the original Huguenots who fled from Provence, France, and took cuttings of their vineyards with them. Her family was successful in South Africa, and she grew up very much a young woman of privilege. But she had a wonderful sense of humour and a great laugh. She would laugh at her own jokes, and slap her knee when she did it. She was wonderful.

My grandfather was in the British Army, and he went to South Africa to fight in the Boer War. He also had grown up in a family of privilege in Yorkshire, England, and was well-educated and a great rugby player. He had a silver whistle which I recently gave to Phinnaeus, when Phinnaeus became a soccer referee. He says when he blows that whistle, you can hear it for two miles. My grandfather taught my brothers to play chess, and he had a silver flute which he used to play in the evenings at sunset. Whenever I visited my grandparents, I used to drift off to sleep to the sound of my grandfather's silver flute playing softly in the background. To me, my grandparents were larger than life, and they were like no one else I had ever known. They talked about far-away places and magical things that I could never even imagine in my wildest dreams.

When they passed away, they were buried side-by-side under a beautiful tree, in a cemetery here in the Lower Mainland. Today I received a phone call from Phinnaeus, asking me exactly where they were. Well, I must confess I have never been there, and I thought it was a strange request, but I told him which cemetery it was and how to find it. A couple of hours later, he called me to say that he had found their final resting places, under the beautiful old tree, at the top of a hill. They they were ~~ Katherine Johanna and Thomas Edward. He said they had lovely headstones.

It gave me the most amazing feeling that I cannot describe, to know that Phinnaeus had visited his great-great-grandparents. It was as if there were a silver thread of continuity from my grandparents to my grandson, and in a strange way it made me feel complete. Phinnaeus has been going through some of the usual struggles of a 15 year-old lately, searching for his own identity, and there occasionally are some rocky patches on his journey, but I was touched that he took the time to pay respect to two people who are very much a part of the identity that he is seeking.

Phinnaeus has promised to show me my grandparents' final resting place. Maybe we'll take the silver whistle and give it a good, loud toot for the Captain and Katherine.
Posted by Jo at 8:07 PM

That is wonderful, Josie! He was a fine boy and I just know he's going to grow into being a fine man! He has great genes! I'd love to go with you some day to pay my own respects, since my family have been blown to the wind. I always regretted I have no "place" to go, but must respect others their wishes.

That is a wonderful post. I so love finding out about lost relatives and how they came to be at the places they were. My grandmother (mom) was from privilege society and ended up in New York...it all goes downhill from there!!!
Your grandson is a marvelous young man on such a journey of the heart. How lovely that he will share it with you.

The young members of our family are growing up, Jo. He is becoming a person in his own right, and this post about the continuity is so lovely and encouraging. I know he will figure it out.

Whereabouts in Yorkshire Jo? You are correct - he was blessed if he lived in Yorkshire! lol! (Wink)

What a delightful story. Young people are always surprising.

How very lovely! He is an amazing young man, your Phinneaus. Yes, you should definitely let him lead you to this hallowed place and blow that whistle as loud as you can.

To be honest I do not even know where my paternal grandparents lie buried, since my father's mother died in WWII... but that's another story.

Though, you know what I like most out of your story? That Phinnaeus did visit their graves by himself. He wanted to do it!
Really nice for a boy his age. :)

A handsome couple. I only met one of my grandparents. I was born late to my mom and they were all dead by the time I was born except one grandfather.

What a special young man Phinnaeus must be. I've raised three sons, fine men now, but I doubt that any of them would have followed through on that desire to find their ancestors on their own at that age.

If he continues to show such compassion, perserverence, and respect for his own personal history, there are no limits to what he may achieve.

The portraits of your granparents are beautiful, Jo...and I love the new avatar!

well done to you and your progeny.

What a cool thing for him to do! By all means blow that whistle!

Love it when my 16 year old grandson surprises me with a glimpse of the man he will be.

Lovely to have the young people be curious enough to look around.

I think this is great. Good for Phinny. Interested in his connections, his roots. Obviously loves his grandmother, too. D

I had a lot of good times in the Paarl. It's not just the wine. There's an excellent selection of fruit.

Your grandparents were a very handsome couple Jo. Such wonderful memories you have of them. Love never dies as long as there is someone to remember. Thank you for sharing such a beautiful and personal post.

What an amazing couple :)