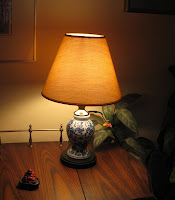 There is nothing more cozy than the glow of a soft table lamp lighting up a corner of a room. I have several of them throughout my house, and I never use more than a 60 watt bulb. I have two lamps in my bedroom and they both have 40 watt bulbs. It's enough light to read, and if I should fall asleep, they don't keep me awake. I have always loved lamps. Books, pictures and lamps are a home decorator's best friend. 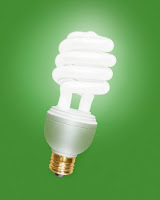 Now we are being told by the environmental Nazis government that we can no longer use the soft glowing incandescent light bulbs, but instead must switch to these ghastly compact fluorescent bulbs. "The federal government will ban the sale of inefficient light bulbs by 2012 in a move to reduce energy consumption and reduce greenhouse gases, Natural Resources Minister Gary Lunn said Wednesday. Lunn said the ban would reduce greenhouse gas emissions by more than six million tonnes a year, saving homeowners about $60 annually in electricity costs. Only the 75-watt and 100-watt incandescents are banned for now, although the less popular 40-watt and 60-watt bulbs are expected to come under the ban by 2012. Stores are not permitted to order more once supplies run out. British Columbia — the only province in Canada that has a ban on incandescent bulbs — plans to introduce similar restrictions on 40W and 60W incandescent bulbs starting Dec. 31, 2012." ~~ CBC News

As it turns out, CFLs have their problems as well, and in fact may be dangerous if they are broken or are not properly discarded, and can release harmful mercury into landfills and watersheds. Oh, good...

We have turned our cities into a ghastly shade of orange with the sodium vapour street lights, and now we will be turning our homes into fluorescent hell. What effect will this have on us psychologically? Canada lives in near darkness for much of the year. Our daylight hours are short, and we rely on artificial light. Light has a huge influence on our psychological well-being. Orange cities, fluorescent homes ~~ how long will it be before we go stark raving mad?

Apparently folks have been hoarding the traditional incandescent light bulbs, and I'm one of those folks. Every time I go into a supermarket, a drug store or a hardware store, I load up my cart.

I believe we have a say in how much of our standard of living is dictated to us. This draconian law of telling us we can no longer use incandescent light bulbs is going too far. Not enough research has been done on the effects of CFLs on people and their home environment.

I'm off shopping today, folks.  If you see a woman carrying a huge tote bag of light bulbs, stop and say hello.
Posted by Jo at 10:08 AM

This is what happened in the UK a year or so ago, the EU said we could no longer manufacture or import them.
The energy efficient ones are rubbish but there are still a few places selling the old ones 'while stocks last.'

Yes, I am with you on this one. I do prefer the incandescent bulbs for certain fixtures, although I can tolerate the curly florescent bulbs for other fixtures. I don't like the dangerous aspects of the CFLs. Here in Los Angeles were told that we must dispose of these at special hazardous waste round-ups, which means we have to store these dangerous items in our homes until there is a round-up event or if we want to expend a lot of energy for trips to facilities that accept these.

A friend who works for the post office told me how once someone broke one of the CFL bulbs in the PO facility. They had to cordon off the area and call in a special hazardous waste crew to clean it up. Really now, if they're that dangerous should these things be used at all. I've broken a couple of these myself and just swept them up and thrown the pieces in the trash. Now that I've said this I may be at risk of being hauled in by the hazardous waste police.

Oh the things we have to give up and must endure to "save the environment". Are we really accomplishing that much?

Lee
Tossing It Out

I prefer choice, myself. I'm going to send my shopper husband out to pick up all he can.

Thanks for the reminder.

I want a future for the children of tomorrow... (as well as the flora & fauna) so I do not mind that our government did this already last year. :)

I soooo agreeeeee! Soft table lamp light is ambiance lighting and I love it!

And Ugh to the environmental Nazis of the world. In whatever country they may reside.

And btw, it's nice to see a Canadian not just clap for everything their Liberal Gov. hands out. Don't know if they are called *Liberals* up there, like they are down here... But I figure you know of what I speak. So often Canadians tout their Gov. policies as the best! But this one.... It just isn't, is it?

At least we have more daylight than you down here in Colorado, but the days are too short during the winter, and I absolutely do not like those CFLs. I prefer the soft lighting. Flourescents give me headaches. Guess I'm going to have to go live in a cave....lol.

I can't see as well with these new bulbs and they are ugly to boot! PLUS it takes them time to get up to their maximum lighting - I have to turn on my new fixture in the bathroom and wait a few minutes to be able to see anything! Not good for people with myopia at night! Any light fixture above eye level that has bulbs facing downward looks just awful with those curly pieces of sh*t...

I agree that choice should be given to all who want to keep the old bulbs. It's hard for me to understand why everyone must conform to every fad that comes along!

I couldn't agree more. They even lowered the wattage on new bulbs,and I also hate the fluorescent ones. Sunday, the local hardware store had a sidewalk sale and because I bought something, I was directed to a barrel of the new curly bulbs and told to take a couple of free ones. I passed.I've begun stocking up, too, when I can still find the traditional ones.

Good luck finding REAL light bulbs. I have been stashing them in my basement ever since I heard they will be illegal next year.

You will probably see me on America's Most Wanted one day. "Iowa man wanted for using .... real light bulbs. He is considered armed and dangerous. He uses his arms to screw in those dangerous bulbs!"

By the way, where can I get my black rotary dial phone repaired? It sits next to my typewriter.

Dear Jo, I have to say that I support the move to get rid of the inefficient incandescent lights. We do need to do it to reduce our collective footprint and energy use. Already, we are using one and a half Earth's resources (especially energy). However, people need to have it explained properly to them so that they will support these measures.

My only concern is that they haven't yet invented replacements for the tiny 7 watt bulbs for mini lamps and other very specialized bulbs. The use such little energy, my feeling is that that they will make those until they figure a better way.

We are older and my husband is disabled. There is a big advantage in the new bulbs having to be changed less often, as for some fixtures, we now have to call a handy man to replace bulbs. Another big advantage to the new bulbs is that they generate far less heat. That heat is what cooks your wiring and causes you to have to have fixtures replaced.

It doesn't bother me at all to wait a few seconds for the lights to come up to full strength, and despite lower wattage, they make just as much light as the old bulbs of higher wattage.

People being unwilling to consider the future and change their habits is how we got into this environmental mess. I still remember the first Earth Day, and how optimistic we were that people could be taught to do better.

Like you, I love the ambiance lighting. I have lamps all over the place. Just warms the place up so much. Light my scented candles and curl up with my blankie. And maybe some cookies. D

did you ever see the movie "JOE Vs THE VOLCANO"? or heard the theory that florescent lights don't emit light, they absorb dark?