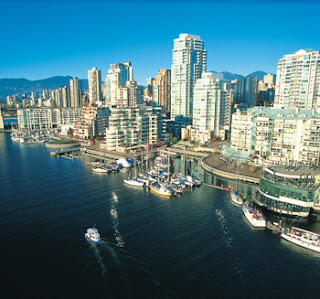 In recent years, Vancouver has been voted the number one city in which to live, and at the same time it has been voted the city with the third worst fashion sense in the world. I think the truth lies somewhere in between. I have been to Paris, London and New York, and Vancouver cannot hold a candle to them for culture, architecture, lifestyle ~~ well, just about anything. Vancouver is fortunate to be situated in a beautiful location, but it's a fairly young city and has not yet really established any sense of style.  In fact, it's really just an overgrown logging town / port, located between the mountains, the old growth forest and the ocean.  We do, however, have one of the sexiest beaches in North America.  Who knew...!  Perhaps that's the reason for the poor fashion sense...  yoga pants, blue jeans, sneakers and baseball caps.  Did I mention yoga pants...? 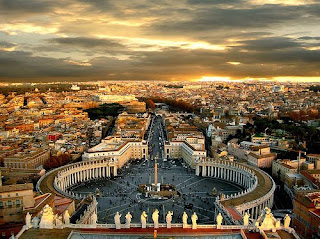 Every year at this time, I dream of faraway places with strange-sounding names... Well, maybe not the strange-sounding names, but definitely the faraway places. This year I am dreaming of Rome. How wonderful it would be to wake up tomorrow morning, and fly off to Rome. Now there is a city with style and elegance, not to mention incredible architecture, antiquities, art and history.  I would visit all the usual places ~~ the plazas, the Sistine Chapel and the museums, the Colosseum and the Pantheon ~~ oh goodness, there is too much to even mention here.  Mostly I would soak in the ambience of the city, not to mention the food and wine. 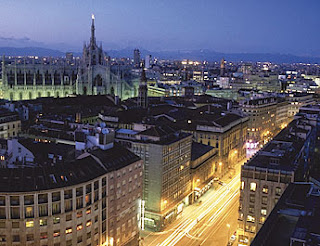 And then I would swing over to Milan and see the fresco of Leonardo da Vinci's The Last Supper. Just think, being able to see the frescos in the Sistine Chapel in Rome, and The Last Supper in Milan. Do we have anything to compare here in Vancouver? Well, yes, if you include the graffiti underneath the Granville Bridge... Then I would have an espresso at Caffè Cova, an ancient Milanese coffeehouse founded in 1817 near the Teatro alla Scala. Oh, goodness. And then I would spend the afternoon strolling through the fashion district. I couldn't afford to buy anything, but I could look.

Armchair travel is wonderful, but not as good as the real thing.  If someone were to give you an open airline ticket, and you could go anywhere in the world, right now, where would you go?  Would it be a warm topical island?  Or would it be a cosmopolitan city bustling with culture and night life?  Enquiring minds want to know.
Posted by Jo at 12:10 PM

I'll go for the culture and great food now. I will save the tropical beaches for when I am old(er) and too arthritic and tired to wander streets, museums, and will probably be on too many meds and dietary restrictions to enjoy the food!

MerCyn, good choice...! Yes, there is so much to see in the world, isn't there?

To be brutally frank I'd sooner just visit in my mind, my dreams. I find travelling any distance a hassle, but then I'm an old fogey now and of the opinion that holidays are bad for your health!
One place I may yet go back to is Wegberg in Germany where I was once stationed when in the RAF. But it will not be the same of course ... never is.

If it were firstclass, and I could take a best friend with me, I would go to Paris again, and to northern Portugal. Yes, REVISIT places I had gone to put those sounds and sights firmly in my mind once again. OR, I would go to a walled village anywhere in the south of France. OH, phooey. Face it, Jeannette, the moment you name a place, the 4-year-old jumps up and down going But what about THAT flower! Oh. THere's a bird over there. Wait. Oh. I have to go here.

I'm a butterfly, I guess. I don't care about the tropics. And yet I wish I could see the Serengheti just once.

i would head for the mountains and
only wear jeans and flannel shirts.
bet you beat my fashion!!

Philip, yes, there may be something to the fact that travel is bad for your health. But, what the heck, it's fun anyway, isn't it?

Jeanette, Paris...! Yes...! I always say Paris is the centre of the universe ~~ the most beautiful city in the world. See you there!

Lea, oh, gosh, I grew up in the rainforest. I want to visit all the bright lights and culture. How ya gonna keep 'em down on the farm... *heh*

I think I'd rather just armchair travel with you Jo. You make it all sound so pleasant and I love all your photos. I almost feel like I went somewhere!

Alicia, tell you what. You pick the place, and we'll go. I think you would be a lot of fun to travel with. :-)

I would go to Paris - at any time of the year! I didn't get to see everything I wanted to last time so I absolutely NEED to see the Louvre, the Musee D'Orsy, the cemetery where Jim Morrison and other famous people are buried, to up to the Arch de Triomphe and sit at a sidewalk cafe and walk the people! Ooo la la...J'aime les francais!

We are going on a cruise of the fjords of Norway in March, with the hope of seeing the Northern Lights. Actually, Fairbanks might be a better place. I'd like to stand outside at night and watch the sky lit up.

My wife would love Rome but I would prefer Vancouver. I wish I could afford to live there. But my current armchair dream is for an airline ticket to Croatia for a mix of culture and history from the less known Eastern Roman Empire and beautiful coastline plus my long time favorite, the beauty of Plitvice Lakes.

My favorite tool for Armchair Travel is Google Earth. It's a free download although it can tax the computer's speed and memory. But you can go most places and zoom down to street level and actually walk around in a virtual world. Pretty cool stuff.

Gosh, I feel a bit like Jeanette: so many places popped into my mind, but Paris is definitely high on the list, and Rome. I've been to both, so if I could go simply anywhere, I'd probably go to New Zealand since I've never been there.

Well you asked, Vancouver. But not the sexy beach. I would look really out of place at a sexy beach and I am not into the fake body parts as noted in your link. But I am into cool looking places with real mountains, and that photo in the link (click on it to see it full size). What a beautiful location.

I second New Zealand. I despise cities, so other than landing at an airport, the city it self offer no charms. Rome? Give me the Tuscan countryside. One exception Sydney Australia. I would love to see the Sydney Harbor Bridge. I believe you have a cool bridge in Vancouver, Lions Gate. I have a weird thing for bridges.

I also second Google Earth and street view in Google Maps. In fact I need to take a ride across Lions Gate, and then down to Sydney Harbor.

BTW Google street view is a little easier on ancient computers like mine verses Google Earth.

I've always wanted to visit Israel and Greece. I would definitely hop on a plane to either or both locations without a second thought!

I visited the eternal city once. I took the highspeed train from the airport and while squashed into a seat with a young couple of backpackers who spent most of the interminable trip groping each other, i had a pleasant time watching a man on a bicycle. The train stopped very frequently. not to pick anyone up or to drop anyone off. It just stopped with a great screech and after awhile the man on the bicycle would pass us by. I noticed that he passed us about 6 times before we got into the eternal city proper.

Paris to pick up my daughter, then on to Firenze. But I am easily pleased - there are so many places I've never seen and would dearly like to. So if you are planning to send me a ticket, just surprise me! Thank you.

i really wanna visit Canada , New Zealand and Brazil.i am a nature lover so Canada and NZ are just perfect for me...and Brazil because of the Amazon rainforests...

Are you talking Vancouver, Washington, USA, or Vancouver, British Columbia, Canada?
If you're talking about the Canadian version, you are, indeed, talking about "an overgrown logging town/port." But as for fashion sense, why worry about fashion when you can wear (almost) nothing at the sexy beaches?

Leslie, you do most definitely need to see the Louvre. Plan on a couple of days, though. :-)

Linda, oh, goodness you have the most wonderful adventures! Have fune...!

Calvin, yes, Croatia would be a very interesting place to visit. I work with a woman from Croatia, and she is quite ... different. :-)

Cloudia, you live in one of THE MOST BEAUTIFUL places on earth. :-)

Bagman, yes, I love Google Earth too. I can visit friends' homes on the other side of the world. :-)

Djan, I would love to go to New Zealand to see the culture and the Haka Dance. I love it!

Sextant, oh there is no doubt that Vancouver is beautiful. And the Lions Gate Bridge is gorgeous. It is sort of a sister bridge to the Golden Gate Bridge in San Francisco, which is also a similar city.

Sincerity, Greece...! Yes! I would love to take a boat cruise around the Greek Islands. Oh ... dream on. *heh*

Eveningson, what a great story! You must have laughed at the cyclist passing the train so many times. Did you ever see a movie with Johnny Depp called "The Tourist"? Part of it was filmed on a train in Italy, and it looked absolutely wonderful...!

Susan, pack your bags. I'll come and pick you up. We'll go see the world. We deserve it, don't we?

Since the time I was in Rome, I have dreamed of going back to Italy. In fact, if I were younger, I might move there. I cannot tell you how fabulous it is - except you already know!

Jo, be sure to add to your itinerary, Florence (breathtaking art)and Venice (before it sinks).

As for me, several years ago there was a television commercial that ended with a reservation number - 1-800-too-TAHITI. :D (sigh)