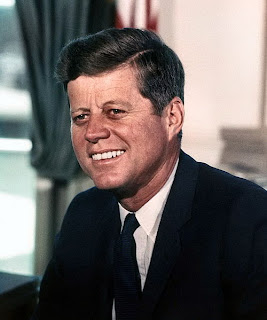 Today is the 48th anniversary of the assassination of President John F. Kennedy, and yes, I can remember where I was what I heard the news. JFK was the first president to have been born in the 20th century and his presidency was a pivotal turning point in history ~~ the civil rights movement, the Peace Corps, the Space Race, the beginning of the Vietnamese war ~~ all defining moments that changed who we are.  If JFK were running for the presidency today, would he be a feasible candidate?  The way we scrutinize nominees for any office, I doubt very much whether he would survive his life being put under the microscope; he definitely had feet of clay, and he had made mistakes both before and during his presidency.

In the fullness of time, I think President Kennedy is best remembered for how he stared down Premier Kruschev and the USSR between October 14 and October 28, 1962.  That was the closest the world has ever come to annihilating itself.  It took a man of great courage to do what he did.  I remember my mother was hanging her laundry on the line, and before she could finish, she came inside, sat down on her chair, and stayed there until the crisis was over.  She believed it was the end for all of us, and in her own way she was making peace with the world's demise.  The Secretary General of the United Nations, U Thant, asked both Kruschev and Kennedy to have a cooling off period.  Kruschev said yes, Kennedy said no.  He insisted the U.S. Navy would stop and inspect all Soviet ships arriving off Cuba, beginning October 24.  After one Soviet ship was stopped and boarded, on October 28 Khrushchev agreed to dismantle the missile sites subject to UN inspections, and the crisis was averted.  My mother got up out of her chair.

It took a man of great strength to do what Kennedy did.  It was the ultimate game of *chicken* and he won.  That is true leadership.  It is rare to see leadership like that today.  Folks are too busy trying to please everyone.  It is for that strength and leadership that JFK will be remembered.
Posted by Jo at 8:07 AM

Oh Josie, I can remember our entire family sitting at the kitchen table listening to the radio...waiting! Whew!

We were in a Volkswagen, traveling from California to North Carolina so my dad, a Marine officer, could take on his new duty station. There was no radio in the car. That night we stopped at a fleabag motel in Oklahoma, and my mother wouldn't let my father turn on the TV.

I wasn't born yet so I have no story but this post has taught me and my hubby quite a lot about that time. We didn't realize it actually came that close! Scary!

he seems even more of a giant today.

He took a huge gamble and won. Lucky for the world but if the dice had not rolled as they did then I probably wouldn't be doing this now - or ever.

All political leaders need to be strong-minded, fearless and able to discount the terrible consequences of getting it wrong.

Churchill was a great leader in WW2 and made many hard decisions, knowing that countless lives were at stake. However, he would not have been a great leader AFTER the conflict.

I wonder if JFK would be any better in today's world? Dunno.

I'm also not sure if Mr. Obama is a strong decision maker. But then how can we be sure of ANY leader - they are only human, after all.

I so remember that day! JFK was such a symbol of youth and vitality and altruism -- even if he was not as healthy as it appeared and definitely had feet of clay. We still admired him from bringing us back from the brink in that October showdown. When he was killed, I was an 18-year-old freshman at Northwestern University and heard the news on my roommate's radio after returning to the dorm for lunch. We all sat glued to the t.v. all weekend, watching live as Lee Harvey Oswald was shot and breaking into collective sobs as John, Jr. saluted his father's casket. And I don't think we ever really felt young again.

What a great post, and particularly meaningful from a Canadian. It's always shocking to realize that some of us have lived long enough for events which shaped our lives to become history. I remember very well the feeling of impending, inevitable doom, and yet I was unable to conceive of such an ending actually occurring.

Ah distinctly I remember. It was in my last year of high school; last class of the day. We got the news he died.

Of course, we didn't know his true character at the time. No matter. In ill health or otherwise, the womanizer with imperial pretensions rose to the occasion when he needed to do so. So the image of Camelot retained its glory.

I was in junior high school during both the missile crisis and the assassination and remember of fearing that we would not survive either event. Rumors flew like wild fire and Kennedy and John Connally getting shot soon turned into half the cabinet. It was a terrible event.

I doubt Kennedy could survive today's fishbowl, and may not even desire to do so. American politics are so fractured, and American voters are so demanding of free miracles that any person with a modicum of commonsense would run the opposite direction. While Rome burns we worry about counting begats, denying that climate change exists, who is bedding down with who, who is allowed to get married, and tax breaks. I think Kennedy was too intelligent to run today.

I think I have mentioned this before here, but anyone interested in reading a fascinating (albeit a somewhat naive and fawning) account of the assassination, I highly recommend William Manchester's Death Of A President.

Cuban Missile crisis happened on 1962. But what happened the year before?? you remember?? Of course NOT.

EVENT 1:A year before "Cuban Missile Crisis" i.e 1961, MrJFK launched a terrorist attack on the nation of Cuba which is known as Bay of Pigs invasion.

It is THIS attack on Cuba which firmly put Cuba on the soviet side and resulted in a chain of events leading to Cuban Missile Crisis!

There would have been NO such crisis if only USA and JFK had extended a hand of friendship towards the newly formed govt. of Cuba...

Or in other words , his actions acted as one of the reasons for Cuban Missile Crisis.

George Orwell, in his essay Notes on Nationalism wrote:

"Actions are held to be good or bad, not on their own merits, but according to who does them, and there is almost no kind of outrage — torture, the use of hostages, forced labour, mass deportations, imprisonment without trial, forgery, assassination, the bombing of civilians — which does not change its moral colour when it is committed by ‘our’ side."

A small quote from Wikipedia article on "Cuban Missile Crisis":

"This action followed the 1958 deployment of Thor IRBMs in the UK (Project Emily) and Jupiter IRBMs to Italy and Turkey in 1961 – more than 100 US-built missiles having the capability to strike Moscow with nuclear warheads. "

As you know 1958 is BEFORE 1962.
So its Uncle Sam whose actions are responsible for the crisis....but most westerners are under the influence of Orwellian "our" side mentality.