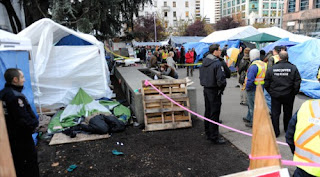 What defines a community? A broad definition of a community is "a group of interacting people, possibly living in close proximity, and often refers to a group that shares some common values, and is attributed with social cohesion within a shared geographical location, generally in social units larger than a household. The word can also refer to the national community or international community." A city is a community. Folks who live within a community understand that, in order to have cohesion and mutual respect, there must be laws in place to protect every member of the community, and it is the responsibility of each member of that community to obey those laws. Also within that community are certain right and freedoms. A perfect community is one in which the laws are counter-balanced by the rights and freedoms. Everyone knows what is expected of them. It is on that basis that I object to the invasion of my community by a group of people who claim to represent me. They do not.  They are, in fact, holding me hostage in my own community.

The balance sheet for the Occupy movement has not been in their favour.  In most cases, the original organizers have bailed, and the sites have been hijacked by less savoury folks.  There have been drug overdoses, deaths, rapes, murder, and a rise in crime in the districts close to the occupation sites.  In Vancouver, the street vendors and business owners were interviewed, and all of them report a 40% drop in their business since the occupation began.  The occupiers are actually hurting the 99% of the folks they pretend to be helping.  A few days ago, a city worker was doused with urine when one of the occupiers tossed it out of his tent.  The Vancouver site stinks to high heaven of feces, urine and other odors which are unidentifiable.  It's a slum.  Under what condition is that acceptable, ever, in any civilized community?

Last night, the mayor of New York ordered the OWS site to be dismantled, and to everyone's amazement, a judge ordered it back.  That does not bode well for the injunction application against the site in Vancouver.  My question is, what happened to the rights of the citizens of the community that these occupations are harming.  The message of the *occupation* has been lost, and the majority of folks want the tents taken down.  The occupiers have no one to blame but themselves for how badly their movement degenerated into something negative and pointless.  Did they really think that sitting in stinking, fetid tents, getting stoned and playing bongo drums would bring governments, corporations and regular, hard-working folks to their knees?  In fact, it had the opposite effect.

Most of their message was actually one with which I agree.  We ~~ all of us ~~ need to do more to help folks who are less fortunate than ourselves.  But making general, sweeping demands is not the way to do it.  It has only created an "us" or "them" mentality; if you're not with us, you're against us.  That is a form of emotional blackmail, a passive aggressive attitude that has torpedoed their movement rather than convince us to get on board.  It has made me really angry, and I have posted about this twice in the past few days because I want those slums out of my community.  They don't represent me, or anyone else I know.  The folks who are sworn to uphold the laws ~~ for all of us ~~ need to do whatever has to be done to restore our community to the true majority of folks who live here and abide by the laws of the city.
Posted by Jo at 10:48 AM

Well said, Josie. Send it to the newspapers! Maybe you could be the representative of 99% of those in your community. I'd love to go downtown while the weather is still good and try to get some photos of the snow-dusted mountains and other sites of beauty in the city, but...

Jo, that is the very result those people who are now in charge, are trying to achieve. Class struggle, us Vs them. Read Marx & Lennin. Enrage and enlist the proletariat against the oppressors.

Leslie, I know! I have been avoiding downtown too. And, what the heck, it's our city! It should not be hijacked from us like that from a minority!

Kurt, I think it is much more basic than that. The camps have become filthy. I have read Marx and Lennin. Sadly, in the long run, their philosophies failed.

It totally pisses me off. They have had to change the route of the Santa Claus parade (which raises money/food for the Food Banks), the tree and Menorah lighting has been changed. Cut off their electrical & water supplies, move in and clean out the place. It is only going to get worse as winter moves in. It isn't the 99% anymore - its the 1% that figure they deserve everything for free.

Susan, yes! They should never have been allowed to set up there in the first place. I can only imagine, as well, the damage they have done to the Art Gallery lawn and gardens. In New York, after the tents were dismantled, city workers had to hose the place down.

Hey Jo, I know you say that you are not a writer, but that is not exactly true.

You sure know how to use words to make a point.

Am I correct in saying that you write best when you are a little pissed off?

Bruce, thank you! And yes, I'm more than a little pissed off. A lot, in fact. I really don't like it when people are in my face, telling me what to think. Those *&^%$#!!! need to be booted out of every city that have *occupied*. The cities belong to the citizens!

Yes Jo, these 'campers' are nothing but a bunch of ScumBags'R'Us.com and hopefully we shall soon be rid of the lot of 'em.
I wonder how they managed to collect their dole money? They're all on Social Security no doubt.

I think your last paragraph says it all. It has indeed become a passive-aggressive adversary situation except in the instances where actual aggressive behaviors have manifested because of the prevailing general lawlessness. The original demands, which were mostly valid, have become corrupted and lost in the mess which has ensued as the movement has been taken over by those who just want to live without constraints but don't stand for anything.