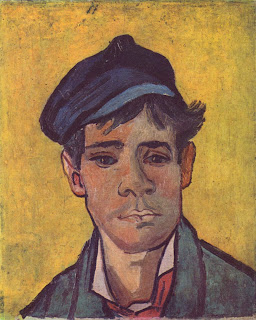 Young men in caps and hoodies always make me nervous.  There is something slightly sinister and foreboding, particularly about hoodies, especially if there is a baseball cap underneath the hoodie.  I always suspect the young fellow is up to no good, so I was a bit apprehensive when I saw the young man walk into the restaurant yesterday.  It was Friday, the end of the week, and I didn't feel like cooking, so I stopped at a McDonald's for a hamburger and root beer.  Shhhh...  don't tell anyone, but I also occasionally ~~ as in once every six months ~~ like to have an A & W momma burger.  Anyway, the place was crowded, and I managed to snag the last remaining table.  The young man came in, took his order, and walked around the restaurant with his tray, eyeing my table.  He circled twice, and then came back and asked if I would mind sharing my table with him.

He didn't appear to be the type of person I would necessarily want to break bread with, so I made some sort of motion with my hands, and said, "No, I would rather not..."  but he didn't understand me, and he thought I had said, 'No, I don't mind..."  So, he sat down.  I sighed and continued eating.  And then I glanced over at him, and underneath the baseball cap and the hoodie was a very sweet face.  He was about 22 or 23 and had a lovely expression.  I immediately felt very bad, so I said, "This restaurant is very crowded this afternoon", trying to make up for my earlier rejection.  He features immediately relaxed, and he smiled and said, "Yes, it is".  He had an unusual accent, and I think perhaps he was from a country in South America.  I wanted to ask him where he was from, but I wasn't sure if he wanted to be drawn into a conversation.  So I finished my hamburger, and as I got up to leave, I smiled at him and said, "Enjoy your meal".  He smiled a very sweet, open smile, and I left.

Afterwards, as I was heading home, I felt very bad about the whole encounter.  I could have been more friendly.  I could have made him feel welcome.  Perhaps he was a visitor here, and he wanted to interact with someone from the country he was visiting.  My own brother has travelled to many countries throughout the world, including South America, Asia, Africa and all throughout Europe.  He always had stories of the people he met there, and the conversations he had had with them.  Here was my opportunity to be part of this young man's story of his visit to Canada, and I missed it.

How many of us do this?  I'm as guilty as anyone.  I size people up by how they appear, how they dress, or how they present themselves.  I wonder how many times I have been completely wrong.  That young man had the courage to sit at my table; I should have at least had the courage to be more friendly and outgoing towards him.

“Fear makes strangers of people who would be friends.” ~~ Shirley MacLaine
Posted by Jo at 11:46 AM

I think it's very sad that there is so much random violence in the world that kind and decent people are forced to be afraid of strangers. It would be interesting to know his story as everyone has one.

What is a momma burger? I never go to MacD's so am not familiar with their menu.

It's your own fault Jo - frequenting a big M place.

Don't feel too bad about it tho. I don't suppose it will hurt or harm him in any real way.

You really can't tell a book by its cover. Too bad we let our stereotypes get the better of us. But as PhilipH said - it was McD's!

I would have done exactly what you did. But then again, vegetarians don't frequent McDonald's all that much. So I'm really not sure what I would have done, now that I think about it. :-)

Its this world we live in Jo... It hasnt worked for us so far , so we need to change it... We need friends on this beautiful planet, we need love to match the colors of the sunset... we need joy to surround us in the presence of the sunrise... we need to set aside our fear and live in love =) wonderful post Jo. I feel you growing... Jo, he might of been one of your blog readers =)

I am going to think about this overnight. My husband cautions me to not be so friendly with strangers. My Mom was that way. We'd be out shopping and she would wait on a bench til I finished. I would find her chatting up some person, even the most disreputable looking character. I believed it enriched her life talking to all sorts of strangers..
How prejudice some of your commenter are...MacDonald may not be the Ritz but lots of regular people eat there.

Well I am certainly not one to be slinging around lessons from the Bible, but is not your story a small version of the parable of the Good Samaritan? We have been battling this sort of thing for well over 2 millennia.

I cast no stones myself. I am terribly reserved and unfriendly in public. It is one of my many faults.

I admit that I put on my "don't bother me" face when I'm out in public. I'm scared, plain and simple but often think of how many wonderful experiences I am missing out on. I need to remedy this and take steps to be friendlier. Maybe I will start at MacDonalds!

There will be another opportunity with another person. Let us know how that turns out.

You were not horrible.

But you were friendly enough, Jo. You made the attempt to engage him in a conversation, and honestly - you can't be too careful these days.
My son wears a hoodie and I always tell him he looks like a hoodlum in it. He thinks it's hilarious that I use an old-fashioned word like hoodlum, which is partly why I do. But knowing him, I realize he enjoys hiding inside of his hoodie. Still, when I see a guy in one, makes me a little nervous.

I have one conventional looking son and one radically tattooed one, who might scare people. He's a dramatic but a kind soul. I wonder if people would sit with him.

And this, of course, is why I stick to the drive-through where my only interaction is with the employee at the window. ;-)

I think most of us are terribly cautious these days, probably more so than is necessary. That's unfortunate, because we'll never know how many blessings we've missed along the way.

It is hard not to judge from appearance. I have been wrong in most cases. I am a fan of Van Gogh and really have never seen this painting.

It is unfortunate that in this day and age we have to be guarded in our every day responses to strangers.

I've learned over the years to trust my gut in situations that I feel uncomfortable. It's never a thought out response, but an instantaneous decision. Perhaps I too have missed some nice encounters.

I certainly have been cautious in similar situations such as you have encountered. And as Country Girl did say you did reach out to him in some small way .

What I find very interesting is the many references to the times we live in, and random violence. I have recently seen information regarding the declining rates of against individuals crimes and the increased safety of individuals in our society. We have the perception that it's a mean old world out there but the facts point out otherwise. We are constantly bombarded with "news"that tells us of violence and crime. The messages have increased exponentially but the crime has not. The media and adverstisers tell us that our personal safety is at risk but the truth is this is one of the safest times to be alive. I don't for a moment mean to suggest that we should not be prudent and error on the side of caution and trust our intuition but the numbers don't bear out the burden of the fear many of us carry.

Jay is right. What makes our times truly unique and far more dangerous than any other epoch is simply the fact that we are alive in them. We don't have to worry about getting robbed by bandits in Sherwood forest, or getting on the ill side of a band of Roman Centurians, we have to worry about the guy in the hoodie.

The media of course blows everything out of proportion. When I was a kid the weatherman would say, well expect snow tomorrow. Now it is NORTH EAST POUNDED BY UNRELENTING SNOW. A fender bender is FREAK ACCIDENT SNARLS TRAFFIC FOR HOURS. A mugging is a crimewave. We live in relative safety and listen to the barbarians storming the gate on TV.

I don't think you were necessarily rude, just cautious. I have encountered people before that make the hair on neck rise; only to discover later that they are genuinely nice people. Better safe than sorry, though.

You never know about people.

I had a student one semester who came to class every day but looked like he was totally bored --- almost ready to go to sleep.

The kid sort of made me angry since he looked so detached. Still he came every day so ....

After the final exam he came up to me and shook my hand. He said he thought my class was the best he had ever taken and really enjoyed the various stories I told and cases we discussed.

Looking at his final exam it was obvious he had done very excellently and must have been listening as several of my questions are based on lectures and not taken from the book.

You never know. Like so many students, he taught me a good lesson.

I've made a lot of new friends through my involvement in Occupy Saskatoon. University students, working folks, and individuals without homes. I could have been afraid of any/all of them. But I decided to treat them as friends. And it has been delightful.
The current task at hand has been finding places for those who need shelter.

ahh there's always room for learning still, isn't there. Just another one of life's lessons that not all people can be read like the cover of a book : )

I actually love hoodies. And I can assure you I'm definitely a friendly and respectable young lad that will chat to anyone!! Where I come from, pretty much my only jumper (I think you might call them sweaters?) is a couple of really cheap thin hoodies, they're perfect in winter as they just take the edge off the cool breeze.. there's something very comfortable about them, sort of like lingering under the blankets on a cold dark morning.

heartinsanfrancisco said...
This comment has been removed by the author.
November 12, 2011 at 8:31 PM