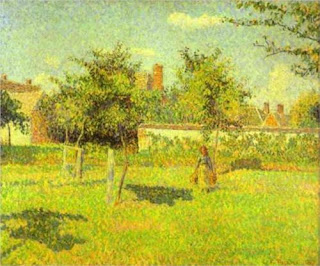 Woman in an Orchard, Spring Sunshine in a Field, Eragny
Camille Pissarro, 1887

Isn't this a lovely painting? It feels like spring. In just 18 days, at 5:30 a.m., the sun will swing around the Tropic of Capricorn, and will return to the northern hemisphere, bringing its warmth and light. I can hardly wait. In Ancient Rome the winter solstice festival of Saturnalia began on December 17 and lasted for seven days. It was held to honour Saturn, the father of the gods, and traditionally, everything was reversed. Businesses, schools and courts were closed, and grudges and quarrels were forgotten. Slaves were served by their masters, and wars were put on hold. Wouldn't it be lovely if everything could stay that way?

I can hardly wait for the lazy, crazy, hazy days of summer to return.  This particular fall season seems to have brought out the craziness in everyone ~~ the Occupy movement, the politically correct police, the silliness of the American presidential candidacies, concerns about the Enbridge pipeline in British Columbia.  It has felt rather claustophobic, to say the least.  Folks all seem to be so serious, and so angry.  I have been trying to spend time away from my computer, just to avoid reading about all the nonsense.

The Occupy movement has been particularly annoying.  I don't think anyone disagrees with their platform ~~ whatever that is.  Most people are concerned about unemployment, poverty, the environment, and more.  But the Occupy movement shot themselves in the foot the instant they gathered.  It was as if they said, "Okay, let's organize, and then figure out a way to really irritate the folks we're trying to reach.  Oh, I know, we'll set up shantytowns in the middle of every city, we'll smoke lots of weed, play bongo drums, urinate and defecate in parks, and generally act like blithering idiots.  Everyone will listen to our message if we do that, and everyone will be on our side."

Totally agree! In today's paper, there's an article about the "occupiers" planning to shut down major ports along the west coast of the USA and Canada! They'd be cutting off the wages of thousands of people who rely on the ports for work! How stupid is that? It IS a beautiful sunny day here today and I hope to get out for a bit of a walk.

Leslie, yes, on December 12th, they're planning to shut down the port of Vancouver. I hope the port authority police arrest their sorry *$$es. *heh* Enjoy the gorgeous weather!

OK, call me an old grumpy but this month is the worst of the year for me. I get rather depressed as it gets nearer "the festive season", or Christmas as the politically incorrect call it.

It has snowed today here in the Scottish Borders and it's getting a lot colder. Could be worse of course but that even colder comfort.

I'm always glad when January 3rd comes around. We'd be clear of Xmas and the New Year pish-up and normality beckons.

Sorry Jo, you've caught me at a bad time, so I'll get me coat!

Yes, let's enjoy this wonderful weather and forget politics! I'm doing my best to stay away from the news, although some of it filters in despite my best efforts.

I like the end of January, because that's when you can really begin to see the light return. The sun is going down at 4:15 today!!

Jo, now maybe the long dark winter days of fridgid weather may shed light on why the Vikings were such bad company...

it does seem particularly dark this season. Occupy needs to say good-bye. I was with them in the beginning but now they are a bunch of squatters and I want them gone. Real people with real issues will never be heard when they act like...well, you know.
Here's to more light and sunny days.

The occupiers may have had valid issues, but lacked the plan to persevere in an intelligent manner. Winter is proving to be extra hard for me this year.

I agree that the attitude of many people these days is bleak. It makes me sad to see so many unhappy faces. And a lot of it seems to come from two main reasons: suffering and a warped sense of entitlement.

The folks that are really going through hard times have my sympathy and support. I know that the Christmas season brings a lot of heartaches and headaches for hurting people.

But all those individuals who complain about everything just because they feel entitled to have whatever they want without any effort on their part should go... live on Mars.

I don't think that it is a matter of "entitlement" here, but an issue of suffering by those who are unemployed (with no chance of being re-employed because of ageism and educational background) and the lack of transparency and fraud that has been wrought on the American financial system.

What's the matter Jo, you say you agree but then dump your own sarcasm on their ideation of what it is they need to do. What if you lost your job would you immediately be re-employed, what if your little nest was taken from you?

Occupy was not about anything specific other then to bring the awareness of a needed dialog to the mouths of people who never had the nerve to speak.

And just to show yoou that I am not all whack about them I have to now and have been for a year agreeing with your pre-election assessment of Obama as president. he is weak. and the Occupy movement is a result of that weakness.

By the by the winter is for retrenchment...wait until the spring.

I agree with your view on the Occupy movement. However, I think you should know this movement is only the beginning of something bigger, like that going on in the Arab world.

And it will serve America right, as its President has encouraged the protesters in the arab countries bringing about almost chaos there.

Why did he and his administration do that? for the sake of democracy? The arab people don't need democracy, they need birth control.

No democracy will feed the egyptians whose birth rate is alarming. Someone has to tell them that, and not incite them against their rulers.

No democracy will heal America of its ailments either, certainly not with an immature president at the top.

So be prepared for an "Arab Spring" both in America and in its neighboring Canada. Good Luck!

The Pagans feasted for days during the celebration of the sun. The poor Christians felt left out so they came up with a holiday of their own.

Even though Christ was actually born in the spring (not the middle of winter) it makes for a good story and seems to have worked out good since we have all this celebration going on at the end of the calendar year.

Let's light some torches and candles and spend the next several days gorging!

Oh, Jo, you're teasing us with your sights and sounds of summer. But first we have to get thru the long cold lonely winter.

So far it's been mild (except for our one nasty Halloween storm). Let's hope it stays that way.

Dunno what to say about the OWS crowd. I guess I share your mixed feelings. I'm with them in principle, but it seems like they're beginning to give the cause a bad name.

May spring bring us better weather, and better politics.

Sorry sister...I so dig the cold weather. Santa doesn't come in the middle of summer!

We're on the Big Island of Hawaii to escape the Pacific Northwest darkness for a couple of weeks. Part of our retirement plan. Three weeks in Arizona in January, three weeks in Ecuador in February. Then back to our normally scheduled dwelling place.

My thoughts turn to darkness in the dark days. And even though they're mostly all just in my head, they serve no useful purpose whatever.

I ran across this blog, any you just naturally come to mind.