A Noisy Noise Annoys An Oyster... 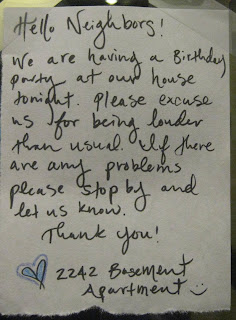 Last Saturday evening, I found this sign on my door. You know that straw ~~ the one that broke the camel's back? This was it. Since 2004, I have had to endure noisy neighbours. The fellow who renovated the house next door, into three separate apartments, rents only to kids from UBC and other local colleges. To give you an idea as to how young they are, the girl in question was turning 19 and she and about 50 or 60 of her closest 19 year-old friends were planning to celebrate.  She was excited because now she would legally be able to drink.  And drink they did.  Do you know what happens to 19 year-old kids when they drink?  Picture it, a group of kids are away from home for the first time.  Their parents live in Winnipeg or Prince George, or in this case, Oregon.  They are supplied with copious amounts of liquor.  They're 19.  *sigh*  During the party in question last Saturday night, I finally had to tell them to shut things down ~~ at around 2:00 in the morning ~~ or I was going to call the police. 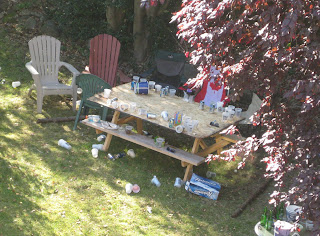 This is a photograph, taken from my bedroom window, of the remnants of a party held next door one night last August. It's just one corner of the yard. It's disgusting, and the noise was even worse.  I have had an ongoing battle with the owner of the house, and it was brought to my attention recently that one of the three suites in the renovated house is an illegal suite. The owner has registered the house with the City Planning Department as a duplex, claiming the basement suite is actually part of the main floor.  However, the house is in fact a triplex.  He has also repeatedly denied that his tenants make any noise.  This note is the smoking gun that I needed to make my case.  Not only are they admitting to the noise, but they are also admitting they live in the basement suite.

The owner of the house lives in a McMansion in Port Moody far away from our neighbourhood.  He has nine tenants living in the house next door, and another nine tenants in the house next door to that.  He charges each tenant $700 a month.  That is $12,800 a month he is collecting from a bunch of 19 year-old kids, and then he lets them loose on our neighbourhood.  Long story short, my contact at the City Planning Department has informed me that the next time the owner's tenants have a loud party, both the owner and his tenants are going to be fined $250.  And they will be fined $250 for each and every party thereafter.

Do I feel bad?  Nope.  I may be blonde, but I'm not dumb.  I am very resourceful, and a force to be reckoned with when I'm angry.  I'm like the Incredible Hulk ~~ "Don't make me angry, you wouldn't like me when I'm angry."  Maybe this weekend I will get some long overdue sleep.
Posted by Jo at 11:02 AM

How VERY annoying for you to have to put up with this!

When Mike & I moved to Cincinnati so he could pursue his doctorate we deliberately chose to live far away from the University - we were not spring chickens & we knew that we didn't need the hassle.

You have my greatest sympathy Jo.

I and the majority of sane people rate NOISE as the worst pollutant ever. It drives people to suicide, to murder, and to madness.


One of the reasons I now live in a quiet country area is the peace and quiet it gives one. OK, at this moment there is a lot of noise, made by howling and raging gales and stair-rod rains, but it will soon subside. It is natural, not some ignorant group of twits just going crazy.

I don't think a $250 fine is nearly enough. Double or triple it would be SOME compensation for the aggro these numpties cause.
Phil.

I thought my neighbors were bad until I read this post. My hat is off to you for lasting as long as you have with such inconsiderate neighbors.

I would NOT put up with any of that noise even ONCE! I love the city and your neighbourhood is SO pretty, but when I get home to the 'burbs, I revel in the quiet here. Oh yes, sometimes in the summer our "loud" neighbours allow their 2 small boys to yell and scream, which is extremely annoying when I've just fallen into a lovely afternoon nap out on my patio! But as they get older, hopefully it won't be so bad. Come on out my way more often and enjoy the peace here! :D

I'm sorry that you have to put up with all of that. Sleep is very important, especially if you want to stay healthy. And I'm certain the owner wants to continue receiving his $700 a month.

But it seems to me that a $250 fine for lying about what type of property he owns and for allowing late night wild parties is too little. $600 at least!

Will your identity be kept confidential or can he find out you were the one who told on him?

I hope things calm down now.

You need to get the homeowners phone number (unless you already have it) and call him every time his tenants disturb you. He may not answer your calls, but he will continue to get the messages. Annoy him the way he allows you to be annoyed. And, never again threaten to call the police. Just call them. You need to start playing offense, not defense.

How annoying for you! I don't think that fine is high enough, though. If the landlord is making that much money off of these apartments then a mere $250 isn't going to bother him. It needs to be $500 or higher. I know you have no say over the amount fined, but I would be sure to call every time one of the tenants throws a party of just plays the music too loud!

Good luck with it all! I hope you get some peace and quiet!

Dumb kids are doing it all wrong. They should invite you as the queen of ball! Once you get a little soused, you won't notice the noise, you will be making it.

Seriously, I feel bad for you. It looks like it is pretty tight quarters too. Well whether $250 is enough or not is one argument but I can assure you that by the time they are paying it out for the third time, they will probably get the message. I do like the idea of calling the owner, oh maybe once every 5 minutes while the noise is going on.

I know you will find this difficult believe, but I attended one of these functions in my less enlightened youth. A 3 story brownstone filled with drunk college kids, myself included. I remember (foggily) of stepping out on the porch and feeling sorry for the neighbors. Later I went out to my car to get a pack of cigarettes (another vice that one would not normally associate with me) and a guy in his forties was standing next to my car. He asked if I was with the party and I politely said yes. He said I'll give you three minutes to get your girl and leave and then I am calling the cops. I went back in fetched my love, and told the honcho of the party what had happened. He busted out laughing and we left.

I don't know what happened, but I never did get any reports of huge bust. So anyhow the moral of the story is that by feeling sorry for the neighbors I was given a reprieve!

Oh and Jo, seasons greetings, and a happy holiday to you. May the spirit of the occupy movement be with you.

You get 'em Jo! I have lived on my little farm for 17 years now and the nearest neighbor is across the rural highway. I had forgotten all about annoyances like you just experienced. I hope that was the last time you had to put up with that.

I once had two Carleton University students live in the basement apartment of the old wooden home in Ottawa where I lived with two house mates. When they had their parties, it smelt like the whole basement was doused in alcohol and the whole of our floor vibrated to the boom of their sound system. Hence I know a little of how you feel.

Oh you poor woman! Even being not so much older than the kids in question (at 21 years old) I can definitely relate to how noisy neighbours can be the bane of one's life.

Good on you for doing something about it! A pity the punishment doesn't fit the crime though!

But just fining everybody when they have a party won't solve the problem. It is hardly a deterrent for young kids who want to party, and the landlord can afford the fine. In fact, if he evicted the tenants in his illegal apartment, he would be out a lot more than a mere $250 once in a while. I would press the city to force him to abide by the law - if he registered his places as duplexes, he should be forced to use them only as duplexes, not triplexes. Good luck, Jo. Noisy neighbors are the worst.

Even when I was young and foolish I was smarter than your neighbors.

Lack of sleep is so frustrating - follow through with your plans to put an end to the noise!

Noisy neighbors and barking dogs have been a thorn in my side over the years. Sorry you're still wrangling with this Jo. At least they had the decency to forewarn and leave you a note.

The problem clearly rests primarily with the landlord and at least now you have some proof.

However, I was shocked by the picture. I hope they cleaned up after themselves.

Several houses in my neighborhood have been turned into student rentals, too. The kids never rake leaves or put the garbage cans around back. If they have a party that's noisy after 11PM, I call the police and say there is underage (21 here) drinking. Usually, the police come by and break up the party, but sadly, there are no repercussions. If houses would ever start selling again, I would move far away from the university.
You have my sympathy.

Is it a bad thing that while reading this blog post, my three year old said, "We've been there." while pointing to the picture of your neighbor's yard.

Swear to God, we haven't been there, but it's making me look at my own yard a bit more critically....looks like Dog Patch around here.....