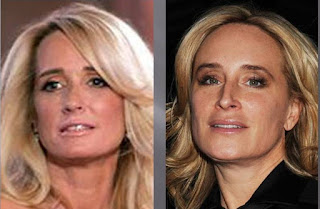 To my untrained eye, these two women look very much alike. They could be sisters, and in a way, they are. Both of them have chosen to air their laundry on live television ~~ and what laundry it is.  The woman on the left is Kim Richards from The Real Housewives of Beverly Hills, and the woman on the right is Sonja Morgan from The Real Housewives of New York City.  The titles of the programs should be renamed as The Real Fishwives... because that is how they behave.  My mother used to say anyone who uses the word "class" doesn't have it, and in this case it is so true.  Money can't buy you happiness, and it certainly can't buy you class.  These women are loaded with money, and so lacking in class it's shocking.  I think that's why folks enjoy watching these shows.  No matter what our circumstances are, these women make us feel better, because they're so wonderfully trashy. 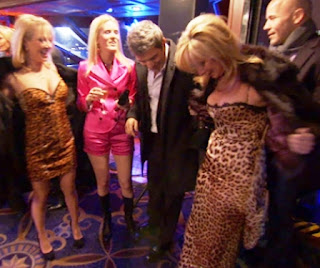 On a recent re-run episode, LuAnn de Lesseps, known as Countess de Lesseps, threw a lavish party on a yacht, because she had been dating her boyfriend, Jacques Azoulay for one year.  One whole year!  An anniversary party.  He looked a bit like a deer caught in the headlights of a car, but that's another story.  LuAnn's good friend, Sonja Morgan approves of LuAnn's new boyfriend. “He’s hot, he’s charming, he’s French, and if I know LuAnn, he’s good in bed!” Money can't buy you class. One of the guests on the yacht, Ramona Singer, announced to one and all that she thought she was pregnant. "My period is late, my period is late, and my boobs are like melons now!" *sigh*  She spent a great deal of time in the yacht's bathroom, doing a pregnancy test.  Well, isn't that what everyone does when their friend throws a one-year-dating anniversary party on a yacht?

I can't hardly wait until next season.  These women are so cheap, tacky, low-class, fabulous, they make me feel wonderful just being me.
Posted by Jo at 12:00 PM

I feel like a real hypocrite stating I don't like any of the Housewives shows when I am very open about loving the Kardashian's, but c'est la vie!

I can't stand that show. I have never watched a full episode I've just caught bits and pieces of the show but I can tell it's not for me.

You are right, they have no class.

B watches "Say Yes to the Dress." I've never seen any of these shows. But I do confess to watching "Two and a Half Men" -- or I used to, when Charlie Sheen was in it. You know, when the show had class!

Alicia, at least the Kardashians are the folks everyone loves to hate. *heh* But the housewives are just ~~ fishwives.

Find the on / off button on the remote. Press once, problem solved. If that don't work, pull the plug out of the wall.

Never heard of these people, and I think in the overall scheme of things, it will matter little to them or me.

Season's Greetings Jo, and have a Happy New Year.

Stop by Iowa Grasslands and see the little blog I did for you. A few of your closest friends want to wish you Happy Birthday today!!

Happy Birthday, Jo. Russell told me it was your special day!

Russell reminded me...but I could not get to the site he created, so...

Personally, I refuse to watch any of these shows, mostly cause being raised in Iowa I was taught NOT to window peep on others. After all, that's all these shows are, voyeurism. I'd rather watch my grass grow.

Enjoy your day, and be sure and have a Happy New Year.

Fortunately, you need not buy your class . . . you were born widdit!
Happy birthday!

I heard it's your birthday and when I came by to check it out you were speaking of fish wives!! hmmmm. Enjoy your special day dear one and don't let them get you down..;)

You're so right, Jo! And Happy Birthday!

Happy birthday and have a great day!...As for the real housewives, it just amazes me what people waste their time watching.

My God! I had 2 aunties and they never said anything like this! Neither did my mum ever use the word "stress" yet I hear it now - from children........something wrong there!

And yes those gals certainly look alike and from what you say act alike, and are alike LOL

I had already wished you a happy Birthday, today on your FB, but Russell, from the American West just came in on my blog to make sure I'd done the same on "A Majority of Two."

Migod. You got so many friends!

As I said on Russell's post I knew you were known far and wide in the blogging community but I never realized you were so close to royalty and celebs!

Happiest of Birthday's dear Jo, you my friend have Class! With a capital "C"

Omigoodness, everyone, thank you...!!! What a wonderful surprise, receiving all your birthday wishes! That Russell is a scaliwag, isn't he? *heh* How wonderful...!

Happy Birthday!! I hope it was a good one for you.

I used to watch some of these shows but each season the women seemed to be even more crass and catty. I'd rather watch a show where people can be happy and pleased for their (so called) friends' accomplishments.

Russell is a good friend, isn't he, to let me know you have a birthday. Hope it's the best yet!

Oh Josie! So your little secret is out - you watch the "Housewives"! Even I don't watch them, unless there's nothing else on and I'm too tired to read a book. LOL It was fun today! Again, Happy Birthday and an even better 2012!

Happy birthday yet again! I also mentioned it on FB, but you know you can never have too many diamonds or too many birthday wishes! Oh, and HUGS! :-)

Oh gosh, isn't THAT the truth!

You, however, DO have easy class that makes all your bloggy visitors feel valued. You are one good lady and I'm thrilled to wish you a happy birthday, and many, MANY more !

I hope the birthday wasn't a secret!!!

And, these housewives of NYC have been my guilty secret. I think you are right and for me, I just like to be so shocked by their behaviour

Happy Holidays Jo, and a joyous natal anniversary to you.

I've never watched any of the Housewives, and now I'm really happy about that. =)

You know what I like about the Real Housewives of Beverly Hills? I like, make that love the cute little dog Jiggy! You're right though--not one of those housewives have any class. P.S. I too heard it was your birthday & want to wish you a very Happy Birthday (what's left of it)! Hope you had a great day! xx

ha ha ha ha your last line was a beautiful ending to to this summary of reality TV Jo.

Oh, dear God, you watch those shows? I just couldn't, even for the possible ego boost to be had for not being any of them. These people are all self-absorbed beyond belief, and yes, "class" is not among their attributes.

Starting journalism while I was in the Service, I took a snap course in that black art.

I got so good at it that I finally majored academically in the trade....But people began to call me a greasy press hack.

Still used to army talk, I would answer, "My ass is grass. I ain't got no class."

You watch these shows religiously, don't you? LOL!

God I hate those Housewife shows. All of them.