To See Ourselves As Others See Us... 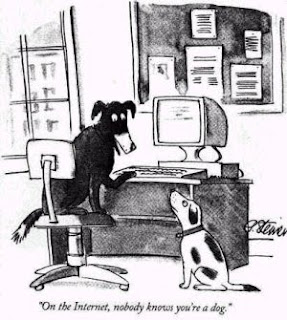 The internet is a very strange place, almost an alternate universe, where people can be whomever they want to be.  I'm not very good at alternate identities, so with my blog, it's pretty much what-you-see-is-what-you-get.  I don't post as often as I used to do, because sometimes I feel I have nothing interesting to say.  There is no point in posting just for the sake of it.  I like to write about things that interest me, and often days will go by without anything tweaking my interest, and then other days I want to post about everything.  I'm not particularly humourous, or ironic, and my blog is not a blockbuster, it's just my boring-little-blog, and I enjoy it.   I have come to know some very nice people through the cyberspace of the internet, including some really nice folks here in Vancouver.  It has been a fabulous experience for me, and has opened a lot of doors to a whole new world. There are some wonderfully interesting people out there.  And I always enjoy having a good discussion or debate.  People can agree or disagree on all sorts of issues, without personally attacking the folks with whom they disagree.  What a boring world it would be if we all had the same thoughts and ideas.  That would be no fun at all.  If people disagree on various issues, it's not personal. 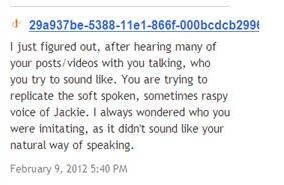 So I was a bit taken aback to read the attached comment on my most recent blog post. I'm about as boring as anyone could possibly be; I have no extraordinary talents, nor do I have any extraordinary vices. I'm sort of like tapioca pudding -- bland, squishy and a little bit lumpy. It always surprises me when folks log on anonymously and leave snide remarks that are aimed at me, and really have nothing to do with the post. It puzzles me, and the first thing that comes to my mind is that the comment says more about the commenter than it does about me.  Why would anyone -- even under the guise of anonymity -- want the whole world to know that they're really a nasty person?  It makes no sense.  I don't make a habit of intentionally hurting people's feelings.  I'm sure I have done it unintentionally, but never with intent.  It would not make any sense to me to do that, and as Data on Star Trek used to say, "That does not compute".   Do folks who leave snotty comments get some sort of a rush?  "Oooh, that was a zinger..."

To whomever left the comment, I was never imitating anyone -- just so you know.  Often people feel self-conscious when they're speaking into a recording device, and we never really sound like ourselves.  I am always shocked to hear my voice.  "That's me?" And often we don't recognize ourselves in photographs or videos. "Who's that?" For that reason, I will never use Skype. No thenk yew...

It's always difficult for us to see ourselves as others see us; often we are not what we think we are.  But when it comes to personal comments about other people, a little kindness goes a long way.  Or as Thumper said in Bambi, "If you can't say something nice, don't say nothing at all".
Posted by Jo at 3:38 PM

C'mon admit it Jo, you got caught trying to be a ventriloquist. I heard you were looking through all the pawn shops of Vancouver for a dummy. Ha! He showed up in your comment area.

Seriously though, you don't try to sounds like anyone but yourself. And you don't even "try" to do that - you just ARE...so for that person who put that comment on your post, blah to you! As Popeye said, I yam what I yam, and that's all what I yam.

The first time I heard your voice, I thought it was particularly, notably lovely. It did not, however, remind me of Jackie O's, which always sounded vapid to me. (I was very surprised that she turned out to be intelligent because I was judging her on her rather unfortunate voice.)

As for this post, there seems to be rampant meanness in the world, and we are all the worse for it. If we could practice kindness, our own lives would be richer and happier because that is how such things work.

Your anonymous commenter has told us volumes about his/herself, and nothing at all about you.

I posted something on my blog that a person close to me took very personal and has given me lots of grief since. I removed it and have apologized but to no avail. I enjoyed writing my blog and made some great friends. I found it wonderful and amazing that one could make close friends just thru blogging.
I know how you must have felt with the criticism you recently received.
So I have decided to not write a blog for a while. Thanks for being my wailing wall. Pam

Well,I know you took formal French, and Jackie was French, but you sounding like Jackie? Certainly not. Canadian through and through, eh? :)

Hmmm. A squirrel just have to ponder. :)

There are people who get off on zinging others. I guarantee you it made his (or her) day. What makes you such a target of value is your popularity and the way that others love the way you express your simple, yet intelligent, views of life. You often say what many of us think. And, that allows that sad and angry individual to feel, with great satisfaction, that he is zinging all of us.

I have ALWAYS enjoyed your blog, ever since I encountered it, Jo. Whoever made that unkind remark has no class, none at all. The one problem with the internet, to me, is that plenty of people use it to hurt others, just because they can. Forget it and keep on making our lives better through your blog posts. :-)

It always bothers me when someone is mean to me in commenting. I had a season of this awhile back, and even though I knew I didn't deserve what they said .... I still took a closer look at myself to try to see what they saw.
You are right when you say the comment says a whole lot more about them than you.

Jo, you receive hundreds of positive comments on your wonderful blog. Don't worry about one bad apple. Integrity is what you do when no one is watching and when you post a negative comment annonymously, it's proof that you have no integrity!

I do have to say that in hearing your voice on the occasional videos that you post that your voice does distort quite a bit. not to worry though, because it really doesn't sound like that in real life.

as for whoever posted that, i wouldn't go so far as to call you a coward, but really it's not your place to call someone out on apparently imitating someone's voice.

Back in the early days of chat rooms, we called them flamers. People who did NOTHING but settle in a room to be horrible. Back then we would simply all block the flamer, and action which amounts to "LA LA LA, I can't HEAR you."

Delete is a wonderful key.

But I simply believe, because of the numbers on the handle, that it was just some random cretan, into finding someplace that is kind and has an open tone to it, and being as rude as he or she could be without using profanity.

It's a shame. Others have pointed out the truth about you and your blog here. You need not worry about such people. I don't think it is personal at all, though stuff like that FEELS personal.

You have over 800 people who feel as I do about you and your blog.

Since I was little, people have said that I sound like Charlie Brown in the cartoons - maybe that is why my childhood nickname was Chuckie.

And why I don't have my voice on the answering machine.

I didn't know one could put voice onto a blog, so I've missed that, but like so many others I love your blog. Thank you for doing it. Isn't Sextant hilarious? He could write scripts for stand-ups. Lovely man.

I agree with DJan (whose blog I've been lurking on for a long time)...and I am not sure now (with attribution) how I can trace the internet path of how I wound up on DJan's or yours.

All I WILL SAY, is that I very much enjoy the reading and the ability to leave comments.

Should I start a blog?

People can be so strange and rude for no reason at all. I don't get it. You are Jo and nobody else!

I just chanced upon your blog while doing a Google search for "Oh, that we could see ourselves as others see us" but saw immediately that I wanted to read more when I finished the particular task at hand that was causing me to chase that poem down. When I saw the post about the criticism, it just drug me in further. Like a lot of folks, I go here and there and there and here looking at blogs, news articles, YouTube clips, all kinds of things and one thing that has consistently BAFFLED me has been to learn that there is an entire species of people out there who find a "life" in making the most UNKIND, caustic and demeaning comments ANY PLACE they find a comment opportunity. I am totally disgusted by such people. Sometimes they jump to horrible conclusions in very tragic situations which they know absolutely nothing about. Who are these people? How miserable they must be!! Their mission seems to be to pass that misery on to as many others as they can.