The Real Housewives of Vancouver 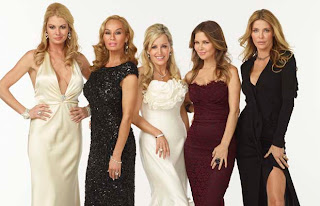 Just when we thought things could not get any more ridiculous ... they did. Introducing here, The Real Housewives of Vancouver. The show previews on Slice television with a two-hour premier event on Wednesday, April 4th.  Oh, the drama...!  Okay, I have lived in Vancouver my whole adult life, and I don't know any housewives like these. Where did they even find these women? They are described in the press releases as follows:

Christina Kiesel: A twice-divorced blonde bombshell, spinster who enjoys jet-setting across the globe and only has her hairdresser “Kevin” to confide in.

Jody Claman: A single mom and fashionista who built her own empire and apparently likes to call herself “Martha Stewart on acid.”

Mary Zilba: A former recording artist (her bio says she had “numerous songs” on the Top 40 chart) and Miss Ohio, she’s on the prowl for a Vancouver man, but isn’t optimistic on her choices.

Reiko MacKenzie: The “multicultural” one who claims both Canadian and Japanese heritage. It shows off in her love of mixed martial arts and sports cars. Good thing her husband’s rich. Together they have nine cars, including a very un-Japanese Ferrari.

Ronnie Seterdahl: Behind the gates of her waterfront West Vancouver community, Ronnie has everything she needs — a yacht, a private jet and her own personal vineyard. Her cast photo reveals she was doing the Angelina Jolie leg pose before Jolie even knew it was cool.

I'm just waiting for the fur to fly -- you should pardon the expression -- when these five women get together.  Actually, it will be fun to see some of the local scenery and "hot spots" that I can't afford never get to see, and to watch how the other half of Vancouver lives.  But real housewives of Vancouver?  I don't think so.
Posted by Jo at 11:32 AM

I guess I'll just have to find out what it's all about from you... I don't watch reality TV shows, and these women certainly don't fit any definition of "real" that I know anyway! :-)

The Unreal Housewives of these unreality shows must work awfully hard to get on TV. I wonder if they move to the next city they hear will have a show. They are their own stage mothers on acid. I don't watch any of them and can't believe people waste their time tuning in.

We don't know about the male characters in this show, but I know what a Greek chorus will say to them: "Run! Run for your lives!"

It's sad that people think this is entertainment :(

But to each his own since I'm a big fan of the Kardashian's and I know a majority of your readers aren't.

I have lived here all my life and don't recognize any of them at all. The rumour is that one of the ladies is or was married to a member of one of the Local Gangs here. And as we are such a multi-culteral city, there sure isn't a variety of ladies.

They have the same "look" as all the other so-called "real" housewives. So I don't know where they came from, but they sure don't look like any housewives I know! Real? As if...

What the? -honestly, what the heck?

As a fan(atic) of your Country, I am quite shocked & disappointed that canadian TV has this BS now, too.
:(

Oh, I think it's considerably less than the other "half." More like a fraction of the 1%. I never watch "reality" tv and will not make an exception for this one. (Quote marks used here because I also don't know very many people who could claim this reality.)

Are they still "real" if their boobs are silicone? Inquiring squirrels wanna know.

I was watching "The Apprentice" on Sunday, and one of the "Real Housewives of New Jersey" is on the show. One of the other women asked her "Are those [referring to her boobs] real?". She responded "Yes, they're real. Well...they're implants." So I would consider them NOT real! There's so much fake stuff, they don't even know what's real any more! (Take a peek at this season's "Apprentice" - not many of those women look "real".)

These people will never survive in the real world. Rather give me reality shows like Amazing Race and Survivor than this junk.

Oh doesn't this look like another silly unreal program. I haven't lived in Vancouver for many years but I know a group of average housewives never looked like that...not in Vancouver or not anywhere.

I'm disappointed that some Canadian TV programs are dropping to this level.

Aargh! Not another one!

Did you see today's paper about one of the housewife's connection to a seedier side of Vancouver life???

Oh, please! Not another unreal "reality" show! Where do they get these women, indeed? Especially in these tough economic times to be presenting people with the top 1%, fantasy lives as "real housewives" anywhere is just insulting! I love your take on the whole thing!

I am so disappoint that my city is putting this on. I don't know anyone in Vanouver that is actually like that.

I won't watch. Too many other interesting things to see around me.

I'm with you, Jo. I don't think this is anywhere near reality. Grouse Mountain, Ambleside, and Lynn Canyon are reality — not what's been described in this program. This is just a diversion into the lives of the rich and famous, our society's definition of "real."

This comes at the same time as CTV is sponsoring a new series called CGB, which is short (I'm told) for "Good Christian Bitches."

Which supports the theory that television is an almost-endless series of commercials interrupted by bad programming. And tells you why I almost never watch tv.