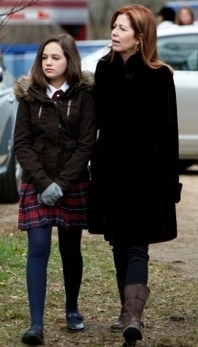 This past television season has had a number of excellent new shows, and one of my favourites is Body of Proof with Dana Delany. She plays Megan Hunt, a medical examiner who balances her professional life -- dealing with the process of analyzing the clues on bodies and solving cases -- with trying to manage her personal life as a single mother reconnecting with her estranged 13 year-old daughter, Lacey.  Ah, yes.  The show must be written by a single mother, because she understands completely the dialogue of dramatic, overwrought teenagers, and the frustrations of the single mother trying to navigate those shark-infested waters.  The interactions between Megan and Lacey are true to life.  Lacey, of course, being the know-it-all teenager, has no respect for her mother until one day  she visits her mother's office.  When she sees her mother in action in her professional life, Lacey's opinion of her mother is profoundly changed.  Her mother is no longer just the "parental unit", but a highly respected specialist in her field, and Lacey sees her mother as a whole other person whom she had no idea existed.  I guess there is some benefit in "take your daughter to work" day.

Lacey is hovering in that grey area between childhood and young adulthood, and she pushes the envelope, as all kids that age do.  At first, Megan is filled with apprehension; she doesn't know how to deal with her daughter -- how much freedom to allow her, and how much to reign her in.  As the weeks go on, they both begin to learn that a compromise is somewhere in between.  In one episode, Megan has hired an interior designer to decorate Lacey's new bedroom, but Lacey wants to do it herself.  Megan finally gives in and allows her daughter to decorate her own bedroom, with her mother's help.  This is something that all parents can identify with, and especially single parents. 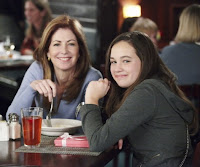 The one thing that was obvious to me was that, when Lacey's father retreated to the background for a while, Lacey's relationship with her mother improved.  There was no longer that "push-me-pull-you" division of accountability that often happens with divorced parents.   Sometimes, without even being aware of it, parents will use the child as the conduit for their own conversation.  You will hear the child "parroting" what one parent is saying, when having a dialogue with the other parent.  Everyone loses when that starts to happen.  A child's relationship with a parent is not similar in any way to the relationship the two parents have with each other.  So, without Dad in the picture for a little while, Megan and Lacey are going through the healing process and re-establishing their relationship, and they are able to have some time to do it.  I'm keeping my fingers crossed for them.

I haven't watched it because I don't much like Dana Delaney, whom I remember from 90210, but you've made a good case for it so I'll check it out.

I haven't seen the show, but from your description, it sounds excellent and true to life. You're right that when there is a push and pull between divorced parents, it's always the child who is hurt. Some people just can't seem to understand that and get past their own pain and anger to a place that allows a child to thrive with the love of both parents.

It's been one of my faves this year so far.

I first watched Dana Delaney in China Beach and I really enjoyed the series. I agree with the dynamic between mother and child being eased without father being around because, particularly when the parents do not agree or are not working in sync because of other relationship issues, this definitely affects the relationship of the teen with the individual parents.

I love this show! I am not sure why, but the writers seem to have seen fit to explore the relationships among the mother, father & daughter without taking sides.In the beginning of the show Dana's character was cut off from her daughter, but now she , her mother, and her daughter are enjoying more time and interaction together. I also love the show, and although this is probably so NOT typical, I love that she shows up to work in classy attire. I really want to know where she gets her handbags , I could use a classy handbag that can haul a lot of stuff around!

My husband prefers another show airing at the same time , so I usually record this show to watch later.

I remember Dana Delaney from "China Beach." Fantastic show; fantastic actress. This one sounds a little bit like "Gilmore Girls" (I liked Lauren Graham but found the show kind of vapid); but anyway, I'd like to give it a try -- thanks for the recommendation!

This is one of my favorites, too. I like how the interaction of the characters is evolving.

I haven't seen the show, but from your description it sounds excellent.