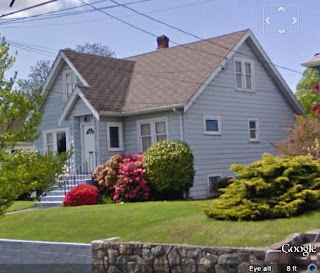 The Bumblebee Tree
(Reprinted with the permission of the author, Phinnaeus - age 16)

I suppose it’s time to discuss the house: the blue house mid-block. It was never a beautiful house, never gorgeous beyond belief. It was well kept, and had a nice front yard with a rose bush next to the window, but it wasn’t anything to look twice at.

Though each component of the house was not individually special, the combination of it seemed to create a magic unlike anything I’ve ever seen. Perhaps it was the way the morning sun sprawled through the windows and lit up the living room; a perfect place for a cat to nap, in the warmth.

Perhaps it was sound of feet running up and down the steps, that could be heard even when nobody was in fact running up them. The creaky second step was always skipped over when one was trying to move around the stairs quietly; and whenever stepped on, was an announcement to all that somebody was coming upstairs.

Perhaps it was the relief of walking into the basement in the midsummer, when there was an exact point between overly hot and bearably cool. And as such, everybody found a sleeping place in the underground, where you could actually sleep without sweating buckets.

Perhaps it was the assortment of doors, each with a different story. It may have been unable to close, or it may have stuck every time you (tried) to open it, or it might have made a big scratch on the kitchen floor from the years of opening and shutting. It might have even been the back fence, which could never be closed properly. Never.

Perhaps it was Thursday night: Survivor Night. When everyone crowded into the living room: Dad on the chaise, Katherine mid-couch, Mum in the edge seat, and me on the rocking chair. When we would all guess who was getting voted off, and never brush our teeth before we saw next week’s preview. The cat would get catnip, and the sit with us; and we would all hear the ghosts running up and down the stairs, and opening many of the 37 drawers.

Perhaps it was evenings in the backyard. Whether it was badminton, or croquet, or eating dinner on the green table, or just sitting and listening to the birds, it was a peace from the world. In the summer, after bike rides and long, hot days, it was to sit in the grass and feel the cool breeze blowing overhead; seeing the golden sky as the sun set only to illuminate another hot tomorrow. The lavender blossomed and set the whole yard full of fragrance, and the bumblebee tree was set abuzz with bees.

But I don’t think that it was really any of these things that made the magic in that house. It was that in all of it was cemented our childhoods and parenthoods. And though we didn’t have much for people over for dinner, or Super Bowl parties, or whatever it might have been, we were there together. The four of us, and a cat of one sort or another, through it all.

Life moves on. We grow up, and apart. And it’s not to be cried about. Tears should never be shed that we lost the house. Because we didn’t lose the house: we found ourselves; we found the true directions of our lives in that building. And when the house achieved its goal of setting the four of us on our own paths, it was needed no more in the world, so it left us.

So I’m not sad.  Even if it stands no longer, it will always have a place in my heart.

“It may be raining, but there’s a rainbow above you…” -The Eagles

such a beautiful story. True, that our memories are what carry us forward and often times backward to a simpler time. Always the memories will hold a special place for that house and it's creaky stair! Wonderful, heart-warming post.

Very wise for being young. Wonderful.

OMG! This is so beautiful. It reminds me of exactly how I feel about the house of my childhood. "Life moves on. We grow up, and apart. And it’s not to be cried about." How very wise for one so young. Thank you for sharing with us.

Phinneus has a talent for writing! He should keep a journal for the future - he may become a famous author one day. Give him my regards and congratulations on a wonderful story. :D

What a beautiful story and wise observations by a very talented young person.

A lovely story - well told. If I can't cry about it, can I at least hope that the ghost shows up in the new house?

That is such a beautiful story. My heart has been squeezed.

What a marvelous recollection Phinnaeus has done. Spoken from his heart, his writing voice is a pure gift.