Diamonds Are A Girl's Best Friend... Today is the 50th anniversary of Marilyn Monroe's death.  Her legend has now outlived her lifetime, and her popularity has not diminished.  If she were on the scene today, she would be recognized for the genius that she was.  She created the image of Marilyn Monroe, borrowing from her two favourite actresses, Jean Harlow and Lana Turner.  From that amalgam, Norma Jean Baker became Marilyn Monroe.  Her creation was brilliant, and if you listen closely to Lana Turner's diction and compare it to Marilyn's, you can hear that Marilyn perfectly reproduced Lana's particular way of speaking and made it her own.  It takes a great deal of intelligence to do something that subtle and intuitive.  But Norma Jean's creation was ultimately Marilyn's ruination.  She had typecast herself, and she couldn't break free from the person she referred to as "her". 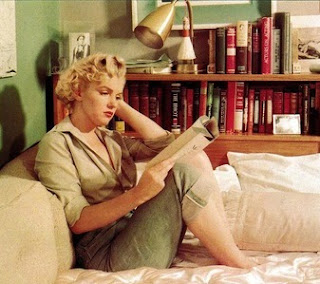 Marilyn Monroe was no dummy.  She attended the University of California in Los Angeles, where she studied literature and art appreciation.  Marilyn wrote poetry and she painted.  She wanted to be taken seriously as an actress, so she joined Lee Strassberg's Actor's Studio in New York.  The school was the most prestigious acting school in America, with an alumni that included James Dean, Marlon Brando, Anne Bancroft, Dustin Hoffman, Montgomery Clift, Paul Newman and Al Pacino, just to name a few.  All heavyweights.  When Marilyn joined the Actor's Studio, there was a certain amount of ridicule and scoffing from the other members.  But when it came time for her to perform, Lee Strassberg is quoted as saying that, to his amazement, she was the best actress that had ever attended his school. Sir Laurence Olivier, with whom Marilyn starred in "The Prince and the Showgirl" was also quoted as saying, "Marilyn Monroe is a brilliant comedienne, which to me means she is also an extremely skilled actress". 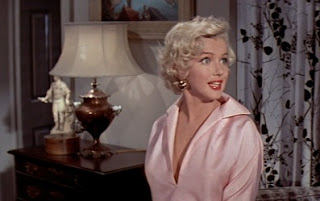 All of Marilyn Monroe's movies would still hold up today and my favourite is "The Seven Year Itch".  That movie is so current, it could have been made last week.  Marilyn is so wonderfully funny and brilliant in it, she would definitely be nominated for an Academy Award if it were made today.  In fact, many of her roles are Oscar-worthy.  But in "The Seven Year Itch", she shines as a comedienne with a wry sense of humour, and sense of the ridiculous.  The chemistry between Marilyn Monroe and Tom Ewell is amazing, and you can see he is having the time of his life playing straight man to her character known only as "The Girl".

There was nothing Marilyn could not do -- sing, dance, act.  It's unfortunate that her beauty and her "Marilyn Monroe" persona got in the way.  It was ultimately her downfall.  Many people have attempted to imitate her, and everyone has failed.  There was only one Marilyn Monroe, and she was a brilliant, multi-faceted diamond.

Thank you for this loving Marilyn tribute.

I too have always identified with her. One astrologer told me that she and I have strikingly similar charts. I was sexy and smart and sad. Fortunately I have survived to be older, happier, grateful. Sorry she did not, but some people finish their work early and go home. . .

Wishing You a Sweet Week, Jo
with Aloha from Waikiki
Comfort Spiral
<(-'.'-)>

Diamonds are only a girls best friend if the girl wearing the diamonds legitimately earned them.

Well, being from a later generation, I don't really know Marilyn like you have described but one things for sure- She has one great smile.