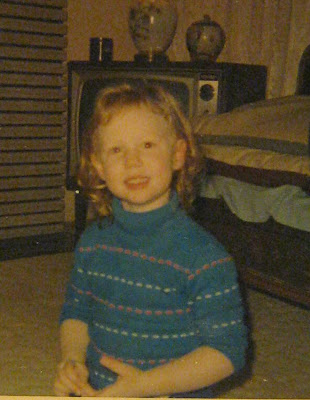 For some reason, this has always been my favourite photograph of my daughter.  I came across this picture in a photo album the other day.  I always thought she was the cutest little girl in the entire world, and she was also very funny.  She was happy and jolly and laughed a lot.  She was not the perfect child, for sure, and could throw a pretty good temper tantrum like the best of them, but that was not very often.  She was curious and inquisitive, and at a very early age she showed an intellectual curiosity that both her grandparents and I nourished.  Her grandfather called her "Kidlet" and teased her that she was a "hidebound reactionary" because she had very conservative views, and my father was a bit of an early-day Hippy.  A jazz-loving Beatnik, as it were.   But he adored her, as did my mother.  My daughter and her grandmother were very close, and her grandmother loved her to pieces.  They had a special bond, an invisible golden thread between them, and my daughter was holding her grandmother's hand when "Gambie" took her last breath.

Lately I have been feeling my mother's presence, very strongly.  I can almost smell her perfume and hear her voice.  My daughter has been going through a teeny bit of a rough patch lately, and I can very much feel that my mother is looking after her.  It's difficult to explain, but I feel it as surely as if she were right here.  Can that be possible?  Love like that never dies, does it?  The bond remains and can break through the veil that separates us from the ones we love who have passed on.  And it goes both ways.  I am almost certain that Gambie knows her granddaughter needs her right now.  I hope the message is heard -- loud and clear.  I have a feeling it is.
Posted by Jo at 6:55 PM

You have always had a sixth sense about you, and I think you are very right in knowing that your mother is there for her now.
What an adorable photograph, btw.

In my woo woo readings, I have read that our loved one watch over us and are always near.

Should you believe that? Well that is up to you, but if you can sense her I think that should be your answer.

My self? Being rather woo woo, I have no difficulty believing it at all. The Soul is Divine and Infinite...it can damn well do what it pleases. The world is a far more complicated place than we can even begin to imagine.

I hope your daughter navigates through her troubled waters. Rough patches, although not pleasant, have a way of making one stronger yet more flexible. It is always better to bend in an ill wind than snap. I wish only the best for you and your daughter Jo. Mom will be close by to lend a unseen hand.

I agree with the other commentors, a love that intense never dies it just changes. If you can feel your mom then certainly your daughter is aware of her presence also. Best wishes to her in this difficult of times.

We do know it don't we?
Aloha blessings to the three generations

So sorry your daughter's going through a bad patch. I understand that bond you're talking about. I had it with my 'Grandma' as she insisted on being called. Very straight laced but not with me. It skipped a generation because she and my mother didn't get on at all! Happy new year to you all.

I believe it can be so if the one in need is touching the one offering the comfort.

I pray for your daughter, the precious little girl in the snapshot, now grown and unfortunately with a hard row too many hard to hoe. Under Gambie's wing she be.

Grandparents can be a huge influence on us and probably the most unconditional love we will ever experience.

I'm sorry that your daughter is going through a rough patch, and I'm sure that Gambie is watching over her and you as well dear Jo.

Jo, I too believe that those we love, even after they pass from this realm, continue to watch over us.

I'm sorry that your daughter is going through a difficult time.

I think The Walking Man stated how I feel much better than I ever could.

I wish you and your daughter the best. Such things are a day at a time and like climbing up a steep hill.

There will be times when you slip and fall back but you just have to get up and keep pushing towards the top.