The Most Dangerous Man in America 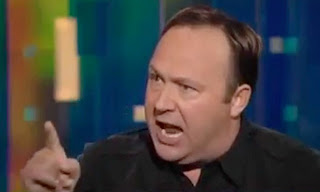 This is the most dangerous man in America.  I hesitate to put his ugly mug on my blog, but you all know who he is.  He's Alex Jones, the head troll of the conspiracy theories, and he's completely deranged.  Frighteningly so.  But the really sad thing is, he has a huge voice, and a following -- mostly impressionable young men -- and some folks believe his paranoid nonsense.  We've all heard his conspiracy theories, so I won't bother to list them here.  All of them are so completely ridiculous, they're laughable.

The latest conspiracy theory, however, makes me physically ill.  The theory is that the mass shootings at Colorado and Connecticut (referred to by the conspiracy theorists as "the Colorado shooting" and "the Connecticut shooting") were performed by the same "actors" and that they really did not happen.  The theory of these disgusting conspiracy theorists is that all of the victims were actors, all of the parents, all of the first responders, teachers, friends and families were all actors, and the shootings were staged so that the American government could take away citizens' guns.

Some of the children at Sandy Hook were shot 11 times by the shooter, who was using an AR-15 semi-automatic rifle.  The AR-15 was first built for the United States armed forces.  Can you imagine what this would do to little six-year-old bodies?  It liquefied them.  Their parents were not allowed to see them to say goodbye.

America is a wonderful country, and I love it.  I have visited New York, California, Hawaii, Washington, Oregon and even part of Alaska.  America is a country that, because of its wealth and resources, has become the strongest nation in the history of the world.  But it is being hijacked by the nutcases and the lunatic fringe.  Conspiracy theories for the most part are harmless and even humorous.  But a conspiracy theory postulating that the children at Sandy Hook were just actors, is beyond disgusting.  It stretches the boundaries of human decency.

The conspiracy theorists need to shut up, and let those little souls rest in peace.
Posted by Jo at 8:27 AM

This guy is more than a nutcase and he should never be allowed any air time or space in written news!

Never heard of him. I think there always have been nutcases, and always will be. I know the media increasingly takes note of them because they're weird, they're crazy, they get ratings. But I agree with Leslie, we should ignore them, not give them air time.

I guess I'm lucky, I've never heard of this guy or his looney conspiracies. Obviously he needs some mental health counselling, but won't get it, instead he'll get followers as looney as he is.

Wow - I've never heard of this guy either and I'm very glad! The theater in Aurora, CO is my local theater. One of the theater managers, a friend of mine, was lucky enough to make it out unharmed, but continues to struggle with what happened every single day. What a horrible person to suggest that the trauma these people have experienced is just an act.

This is the first time I've heard of this moron. Is this guy for real? I'd like to see him go up to each and every one of those parents who lost their children and tell them that it was all just a hoax. Some people make me sick.

I heard a guy today saying "some of them have their tin foil hats on too tight!" It's definitely true of this idiot.

America is a country that respects its waterfowl. Federal regulations for shotguns used in certain duck and geese hunting have a three shot limits on the gun's magazine.

Assault rifles used for killing people can be had with 50 and 100 round quick change clip magazines. They fire as fast as you can pull the trigger.

Be kind to your web footed friends....

I had never heard of this guy, but I hope he doesn't get any media airtime to spread his lunacy and hate. I'm always amazed -- but probably shouldn't be -- how people will listen to and follow a person like this.

I have heard of him but not about this conspiracy theory, if you can call it that. It's like those who say the Holocaust never happened. The world is filled with lunatics and nut cases, but these days they get air time.

I hadn't heard of him either. Poor man needs some help.

Wow! I am happy to say I have never heard of this guy.What a repulsive man.

I love conspiracy theories but what this guy is doing is reprehensible and hurtful and should not be given airtime.

Sometimes conspiracy theorists are just part of the good trees out there wanting all of you to show empathy. They want all of you to shed tears and cry. We all need to cry out loud because our eyes, our vision need tears because we're all DRY from these BS technology that's bleeding us dry. Meaning: Stay Hungry. Stay Foolish. Yeah that's the generation of today! It's all LURE and HOOK!

I read about this, and I was completely shocked by it. People sometimes amaze in negative ways.

He must be a nutcase in Canada...I have never heard of him. In America, we have a nut case called Russ Limbaugh.

I love your description, "He has stock in tin foil hats". HILARIOUS!

I won't even comment on this guy... I agree with DJan.