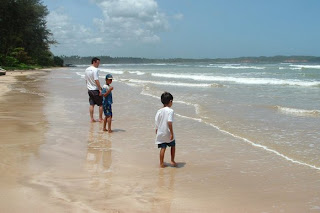 Sonali Deraniyagala's universe changed the moment the sea came and took away her entire family -- her parents, her husband and her children -- on December 26, 2004, just as they were preparing to leave their resort hotel in Yala on the south coast of Sri Lanka. In her book "Wave" she writes, “No moment of separation, not one that I was aware of anyway. It was not like I tried to cling to my children as they were torn from my arms, it was not like they were yanked from me, not like I saw them dead. They simply vanished from my life forever.” 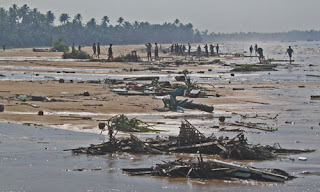 Ms. Deraniyagala’s writing is stark, almost poetic, with brief, concise sentences, almost as if to write one more word would be to open the floodgates  (no pun intended) of unimaginable horror. For eight years, she struggles to forget and then forces herself to remember, lest she lose them again. With grace and dignity, Ms. Deraniyagala lets us into the darkest  areas of her heart as she goes on her journey of grief, and eventually finds a semblance of a new life and a degree of peace. 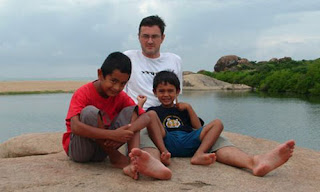 Often we are witness to horrendous events such as the 2004 tsunami, the 2001 World Trade Center collapse, the Newtown massacre, and we say, “How terrible, how ghastly…” Ms. Deraniyagala takes us inside the event. We watch the wave coming in, we smell the ocean; we feel the emptiness as she returns to her house in London and finds all her family's belongings just where they were when she left, her sons' soccer outfits with the grass stains still on them.

Years after the tsunami struck, Deraniyagala returned to what was left of the demolished hotel in Sri Lanka. "I lay on the warm floor of our hotel room as a slow moon scaled above the sea…. At the edge of this floor, there was a small bolt-hole, filled with sand. When I saw the wave coming toward us, I asked Vik to shut that back door.  It was into this bolt-hole that he pulled down the lock. Now I traced the rim with my fingers. I cleaned out the sand."  This book is not for the faint of heart. It is gut-wrenchingly honest, but you won't want to put it down. Over 230,000 people perished in the 2004 tsunami. This book brings home the fact that each and every one of them had lives and stories, and grass-stained soccer outfits left behind.
Posted by Jo at 11:16 AM

Oh my how heart-wrenching and beautiful her words are... I don't know if I would have the courage to read them...

I remember that horrific event and feel for all who experienced it or were taken forever...I must look for the book! Thanks for the recommendation.

I, too, remember the news from that morning when I woke up.
I wonder if I have this book on my online to-read shelf. And if not I must see to it!

Sounds like a most interesting book to read. Events such as this are impossible to really appreciate unless you have actually had to live through them and experience all that goes with such a tragedy.

The fact this woman is willing to share with us some of her feelings and insight is a gift.

It is not ever the escapist literature that heals me, but these kinds of books. Thank you for the review. I will see if I can get it at my library.

The fragility of life only becomes real when we lose our own loved ones. Until such time, we mourn in shock the global loss of enormous numbers of people in a disaster such as the Tsunami but it takes the words of a woman focusing on small details preceding the loss of her loved ones to bring home the magnitude of suffering of individuals and how they are able to cope with this loss.

Oh wow...I might have to stop for a minute & pick this little gem up.