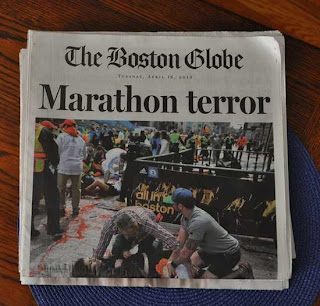 The Boston Marathon yesterday was dedicated to the 26 victims at Sandy Hook in Newton -- 26.2 miles -- one mile for each victim.  A small group of the parents from Newtown ran in the marathon; they were called 'Newtown Strong'.  "In the first 20 miles we're honouring the 20 Sandy Hook first graders," Laura Nowacki, a spokeswoman for Newtown Strong, explained to WBUR Boston. "When we crest Heartbreak Hill, and we're coming back towards Boston, we run the final six for our six fallen educators, including their lives, to protect our children." Survivors and families of the Newtown tragedy were invited to watch the race from a VIP area near the finish line.  We all know what happened at that point.  In a horrible twist of irony, an eight-year-old boy was one of the people killed. 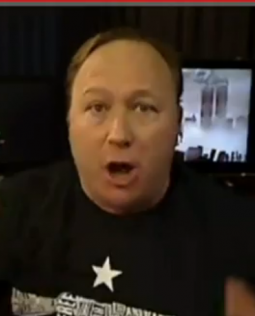 Before the smoke had even cleared, Alex Jones, an execrable, sorry specimen of a human being, had declared the incident a "false flag".  In the past, he has also declared the World Trade Center collapse and the Colorado and Newtown massacres "false flags" as well.  Children died in all of these tragedies.

What the hell is a false flag?

Who the hell is Alex Jones?

Why is this piece of human garbage man even allowed to perpetuate these rumours?  I can't think of a worse way to pay disrespect to the dead and their loved ones.

Alex Jones should thank his lucky stars that he lives in a country where he is able to spew his verbal diarrhea speak in freedom.  In many other countries, he would have been made to disappear -- a long time ago.

“Conspiracy theory is the ultimate refuge of the powerless. If you cannot change your own life, it must be that some greater force controls the world.” ~~ Roger Cohen
Posted by Jo at 9:52 AM

Just who IS this cretin?

Leslie, he is some moron who lives in Texas, and he has a radio show. He's despicable.

Meanwhile, David Axelrod, former political analyst for Barack Obama, suggested (wondered out loud) that the perpetrator may be some anti-tax crazy white, right wing extremist (because it happened on Tax Day, totally forgetting that the event was the Boston Marathon which *happened* to be on April 15.)

Alex Jones is considered even by conservative Republicans to be a nut job, but David Axelrod is supposed to represent one of the pillars of the White House.

Lorna, Yes, nut-jobs come in all stripes, don't they? *sigh*

It's probably some "lone wolf" who made a very amateur bomb -- nails and ball bearings. I'm just so sad that a child died. That breaks my heart. People should have some respect for the dead and their loved ones.

I hadn't heard that one. Still trying to make sense of the whole thing. That was my home they blew up. I will never understand why people feel the need to harm or take the lives of others....

These are baffling times, for sure.

Lorne said the same thing that it's probably some nut from New York or somewhere like that.

@Leslie --- it could be a home-grown nut-job or actually even an overseas nut job. I would not discount the possibility of an Islamic terrorist nut-job working alone or in tandem. At this point all possibilities are open and I would not presume it to be some lonely guy with issues from New York.

Whoever it was, he or she wanted it publicized and chose an event that had video cams set up all over the place. What makes it hard to analyze is that there is no one claiming responsibility like Islamist terrorists usually do.

False Flag: when you do something but blame an enemy for it, in order to get people to be angry at your enemy. Example: 9/11 was done by American government people, but blamed on Muslims. The supposed goal was to increase national security; the real goal is to increase intrusion into American's lives, as away of getting more control over people.

I don't believe it, either — about 9/11 — even though the government is becoming more and more intrusive, in the US and Canada.

The Boston Marathon Bombing was so sad!

It is sad that some people choose incidents like this to further their agenda. My heart is with all those affected by the tragedy.

I think Mr. Jones' goal was to get some air time and he did.

Ann Coulter is a good example of a person who says outrageous things and is rewarded by being asked to be on high profile talk shows and appear at speaking engagements.

Coulter uses her insensitive comments to sell books and she makes a ton of money by being so controversial.

I think it is important we focus on people who represent the sentiments of most of us and who have commonsense -- and not give the people on the far fringe any more attention than they deserve.

It seems that when it rains, it pours.

@Lorna - he was just trying to be funny...and failed! lol