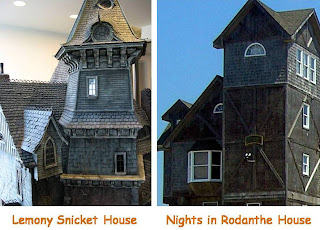 I rented a movie this weekend called "Nights in Rodanthe", and as the movie began to unfold, I wondered where I had seen the house before, and then I realized ... ta-da ... it's the same house, well almost the same house, that was in the wonderful movie "Lemony Snicket's A Series of Unfortunate Events". Can you see the resemblance, or is it just me?

A few weeks ago my good friend Russell at Iowa Grasslands took a photograph of an old house out on the plains of Iowa, and as soon as I saw it I thought, "Where have I seen that house before?" And then I realized it looks very much like a painting by Edward Hopper called "Ryder's House", painted in 1933. Can you see the similarities -- the chimneys, the roof lines, the shadows on the roofs, the narrow windows, the angles of the houses. 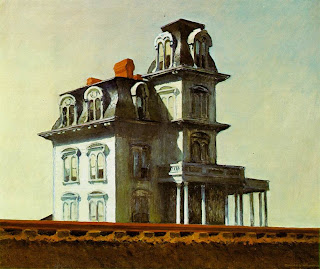 And this is where it starts to get really weird, because in 1925 Edward Hopper painted a house called "House by the Railroad Tracks" and it looks very similar to the "Nights in Rodanthe" and "Lemony Snicket" houses. Oh, gosh, it's all making my brain hurt. I have always seen resemblances between strange things -- objects, people, shapes... To me, nothing is ever what is really is, it always takes on another form and looks like something else, sort of like an M.C. Escher illusion.

I have been told by people who have visited Boston that it looks very much like Vancouver, and yes, the two cities do resemble each other. Something like that strangely appeals to me. It's amazing the things we can see, if we just stop for a moment and look.
Posted by Jo at 2:31 PM

Jo, you know what? I like the way you tend to see things that might be there. I am the same way and it is so good when someone else reacts the same way.

I have an explanation for those houses, but I like your romantic and dramatic tendencies. :-) :-) :-) Really!
~Lorna

Lorna, an explanation for the houses? I would love to hear it.

Well, first: I also want to rent the video of Nights of Rodanthe. I love those two; they were great in that other movie titled, I think, “Unfaithful.”

About the houses: It seems to me that all Victorian houses are going to have similar features, all farmhouses the same, all Georgian houses the same. They all vary only slightly.

Lorna, oh, yes. :-) Life is much more fun when it is mysterious.

You will love "Nights in Rodanthe". And yes, "Unfaithful" was amazing too. Also "Intersection" which was filmed in Vancouver. Diane Lane was not in it, but Richard Gere was and Sharon Stone and Lolita Davidovich. It's a similar type of movie.

Yes we all all need/tend to find some mystery in the mundane, because usual is oh so boring :)
Though I agree there's some similarity in the structure of the houses there.

Your last sentence sums it up. People just don't stop and observe anymore. Life is too fast for some folks. Relax and slow down, and see the finer things in life.

I can see the similarities. Having been to Boston and Vancouver though, the two cities are very, very different. Give me Vancouver any and every time over Boston! Maybe that is because Vancouver is so very similar to Washington State cities in other aspects besides sky line. And also, Vancouver and Seattle, and other Pacific Northwest cities are so much more all around friendly than Boston, which after years of being in other cities all over the U.S., Boston was the most unfriendly city I have ever been in...and we were there for 10 days, spending lots of money too!Boy did I digress from the intent of the post!(we did appreciate the history there, but friendly...nope!)

I can see similarities too! This could lead to all kinds of separated at birth photo doubles! Interesting.

The Victorian Hopper house was a direct inspiration for Norman's creepy abode in Hitchcock's "Psycho".

They're twins! Is there such a thing? You're right, they must have been separated at birth. Fascinating post, Jo.

Its funny how we see something in our lifetime and years later, it comes back to us in a similar form. Kind of like deja vu! I always love it when that happens to me!

The House by the Railroad Tracks looks very much like a house here in Raleigh.

When we were working on the identity graphics for Denver Cereal, we had the hardest time differentiating the Denver Skyline - take out the mountains and you could be anywhere on the planet. Sigh... I hear you!

older houses do have alot of eccentricities built right into them. certain styles of house always bring memories rushing back whenever we see them. so vancouver and boston do resemble each other, if in buidings alone? apparently boston wins hands down in unfriendly cities and iv'e never understood that. could somebody please explain? jc

We both got into house styles at the same time!

It is fascinating to see how certain styles have stood the test of time and travel from one continent to another, and how some styles just fail miserably when moved from their original locale.

Maybe that accounts for some of the similarites?

Yes, you can really see the similarities in the styles there. I've never been to Vancouver, but I'd love to go someday - it sounds lovely from what I've heard. Boston, not friendly?!? KathyB didn't run into me or JackC, then. We are as friendly as they come!

I think you may have special skills having to do with building design. That's why you see patterns. I see "patterns" in people. Other people see "patterns" in art, science, etc. (A theory I have had for a while.)

My daughter said she is still crying from Nights of Rodanthe, which she also watched this last weekend

Jo, I think you need to check your vision...lol.....just pulling your leg hehe.
They do all look similar!
Have a Great Day! Always fun to visit!

The painting of the house by the railroad, at least I believe thats what the title is, reminded me of the Bates' house from Psycho at quick glance. Oh and who wouldn't want to live in the house from Nights in Rodanthe??

Ramblings of the Heart said...

I love the seeing double aspect. I also love Edward Hopper's paintings. I have a book of his works so I can look anytime I want. It's his use of light that really provides the "mood" for his paintings. :o)