The Troll Under The Bridge 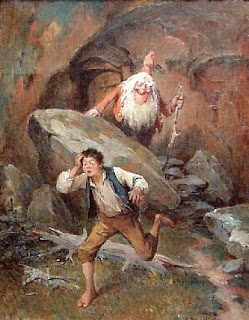 When I was a little girl in elementary school, I used to walk about six blocks to get to school. In those days, children were considered old enough to walk to school on their own without fear of being kidnapped. We were not allowed to walk along the shortcut by the railroad tracks, however, because there was a real danger from trains ... but we did it anyway. On our route was a small railway trestle and nestled just underneath it was an old shack. It had once been a nice little cabin of some sort, but now it was shabby and in disrepair. Inside the shack under the trestle lived a troll ... yes, a real, live troll. If the children got too near his house as they passed by, he ran out and shook his fist at them, "Stay away from my house you little mudrats, or I'll have you for dinner!"

Our troll's name was Digby, and occasionally we would see Digby walking along the sidewalks of our town. He would shuffle along, leering at people as he walked by. I realized years later that this was Digby's attempt at a smile. He was trying to be pleasant to the people in town.

When I was older, my father told me the story of Digby. He had come from a very upper class British family, but he had been the so-called "black sheep" of the family, so his family sent him away to Canada.

Canada seemed to be the depository for many of the black sheep of English upper class families, and often these folks went on to make their fortunes here, becoming well-known artists, entepreneurs, lawyers and judges and famous writers. One of my father's best friends was a very well-known writer. He had been caught smoking and drinking and was expelled from the tony Charterhouse School where his father had been the headmaster. He found his way to Canada where he became a teacher, a prolific writer and a magistrate.

So it seems that old Digby, the troll under the bridge, had been born with a "silver spoon in his mouth", but he had made a wrong turn somewhere in his life, and he ended up living in a shack under a bridge. My father told me that Digby's family in England continued to support him quite generously, and there was no need for him to live in a shack under a bridge. I think he enjoyed it, though. He loved frightening the children as we walked by. For him it was a game and years later we still remember old Digby -- the troll under the bridge.
Posted by Jo at 7:58 AM

I love that story. I just watched, "To Kill a Mocking Bird" and for some reason this story seemed reminiscent to that story; Boo Radley the misunderstood "freak" of the neighborhood, turned hero and good guy at the end :)

That's a great story! I sometimes think I would be quite happy as a hermit, free to do whatever I chose whenever I chose. But I always pictured my hermit accommodations to be a bit nicer than a shack under a bridge. LOL

Very nice story. When we were young we had a crazy woman much the same as your Digby. She was literally just off her rocker. She used to walk with "Napolean." She would talk as though he were right there and if we sped by on our bikes too quickly she would scream that we were "running over Napolean." We'd peek through her window and see her eating dinner and conversing with her imaginary friend...or so we think? lol

What a great story.. to have not only a troll but one who lives under a bridge is a wonder for a child. You were lucky to have a Digby. :)

I love the story!! You are such a great short story writer. Sometimes I think that those people have the right idea, how nice it would be sometimes to be able to keep to ourselves and have plenty of money while doing it!

thank you for that piece of history- about th "troll", he probably didn't want to live anywhere else

I had a case one time where an old man decided he wanted to live in a cave out in his pasture. He and his wife had a nice house. But when his wife died, the man became a recluse and moved to the cave.

The man's children were worried about their dad and how he only ate animals he killed or roots, etc. He lived completely off the land.

The children tried to have the man committed to a mental hospital but the Judge allowed him to live in his cave since it was warm and dry and the man was not a danger to himself nor others. He did have a dog that stayed with him at all times.

The man was one of the most intelligent clients I ever had. Much smarter than I ever will be. Now I live alone in a house with a dog and some people most likely think I am very strange.

Perhaps I am, I am not sure. But the man who lived in the cave was more sane than most people ever will be and I am glad he got to be left alone.

After a time he did move back to his house - but he needed some time to be alone and away from the house that he and his wife shared for so many years.

Like your troll, I too was born with a silver spoon in my mouth, but there was war and famine. My mother and father succeed in Canada, but I got an education, and that was probably my undoing.
Had to be a poet, wouldn't you know it, and lost the practical sense of my parents.
Spent time under the bridge.
No nice trolls there. Bored hobos making sexual advances on each other.
This was no deliverance. This was Deliverance.
Scared straight and shall never live under a bridge again.
"Come here, you fancy little Ukrainian!"

I seem to remember some childhood story like that.

Great story, Jo! I could just see the kids running away and screaming as he came out shaking his fist. :-)

When my daughter was in pre-school, she played the troll under the bridge in The Three Billy Goat's Bluff. She was quite dramatic for a girl that couldn't have weighed more than 35 lbs. This same daughter, while we sat in a broken down car in California, waiting for the tow truck, spotted a bag lady sitting under the via-duct. She asked me who she was and I said she was a lady who collected things in the streets and kept them in her bags. (She was too young to understand that she was homeless). So, she told me she wanted to be a bag lady when she grew up.

Troll or bag lady, she wasn't setting the bar too high for herself....and she is kind of cranky and collects way too much junk. Hmmm....maybe she did realize her dream?

Really did enjoy reading this, I guess it would be nice to live in a shack in cold Canada. Alone!
Yes, definitely...

Jo, you have had such an interesting life. I love hearing your stories.

That is such an interesting story. I loved the part about the smile/snear.

Oh, So many trolls wandering loose... I just read that a troll in the blogsphere is a mean spirited insulting visitor that thrives on verbally attacking people. I'm thinking about putting a sign on my blog: No Trolls Allowed! Good post.

Sweet memories, your the Wonderful Wizard of OZ...also the great story....

What a wonderful story! I also walked to school from kindergarten on, about 3 miles each way, because my mother didn't drive.

There was a tarpaper shack in the woods where it was rumored among the children that "poor people" lived. I was shocked that anyone poor could be in our town as I really believed they were only in fairy tales.

We did not have a troll, though. Apparently all the trolls went to Canada.

You don't mean that last commentator, do you?

Is that place for sale...I want to live there. The kids here carry guns as they go to school.

We read of many trolls and hermits on the periphery of our tinsel and civilized society so called. Perhaps they are the predominantly sane ones who have a consciousness we as a whole have lost?

Sometimes living as a hermit and not worrying about pleasing the respect abilities of others sounds downright tempting.But then I remember i don't want to embarrass my family or scare little children, and maybe i should visit the dentist so my grimace resembles a smile.
Great post !

I like this post about Digby. And it goes to show that there is always more to people than what meets the eye. Everyone has a story and usually an interesting story at that!

Jo- OMG, you are the first person that has not been able to view my blog, that I know of. Try www.theodonnell7.blogspot.com. Please let me know if you still can't access it.

We have some characters in league with your Digby here too. How boring life would be without such unique people! Loved this post!

wow, what a great story! thanks jo (: