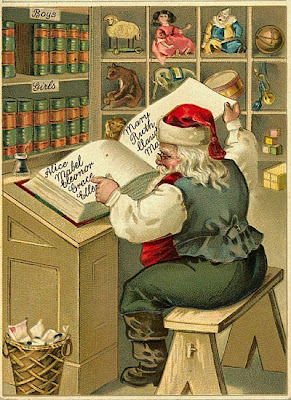 When Phinnaeus and Marigold came to visit me last weekend, I gave them each a piece of paper and a pen, and I asked them to write out their Christmas wish lists. I picked up the lists today, and as I looked at them, I realized what nice kids Phinnaeus and Marigold are. Their lists were so sweet, not at all extravagant. And their lists perfectly matched their personalities. One of them had written at the bottom of the list "anything that you think I might like".  Omigoodness...

I wish I would win a lottery, so I could afford to buy them all sorts of things.  But those would only be things.  As I look over Phinnaeus and Marigold's Christmas wish lists, I can read between the lines.  They are lists of trust and hope, both of which they already have in abundance.  They are two of the very nicest people I have ever known.

When they were very little, a large part of Christmas was about Santa and the presents under the tree.  On Christmas Eve we would track Santa's journey around the world, using the NORAD website.  "Oh, he's in Nova Scotia, time for us to go to bed now..."  This year I sense something different.  This year they are more concerned about what they are going to give people, than what they are going to receive.  A polar shift...  Oh, yes, of course they still want the latest gagdets and doo-dads too, and "anything that you think I might like".

Each of their lists were only five items long, and in those five items, Phinnaeus and Marigold's own distinct personalities were revealed.  It makes me chuckle when I look at them.  Those lists say everything about who they are.  They're worth framing.  There has been a bit of a shift in the magnetic poles this Christmas, but I always believe these things are for the good. Invariably, they are for the good... My Christmas wish list for Phinnaeus and Marigold -- and for everyone -- is to just have fun.  Christmas is a time to enjoy all the wonders of Christmas, and to just have fun.

"... and it was always said of him, that he knew how to keep Christmas well, if any man alive possessed the knowledge". ~~ Charles Dickens, A Christmas Carol
Posted by Jo at 11:04 PM

I would love to recieve a whole lot of love and hugs for this Christmas and some more of the same for the new years :)

And this is what I have kept in bulk saving all year round..so everyone who knows me please dont mind if my present for you all turns out to be exactly the same

There now Jo you know what to give me now for X'mas :)

I hope my kids will turn out like that when they are a little bit older.

How absolutely sweet and what a wonderful post! It makes me happy to know that there are kids out there who are remembering that Christmas isn't about getting as much as giving.

I hope you do frame the lists.

I was playing school with my grandson (Justin) when he was 5 (now he's 19 and in college). I framed the answers he put down on the 'test' I gave him.

I had him add numbers - he got them all right, and now he's studying to be an accountant, so that seemed appropriate because the numbers I'd given him weren't easy.

I asked him to write his favorite juice. He wrote: 'apoll juice'. So, spelling wasn't his gig.

I asked him what his favorite soda-pop was. He wrote: 'darte peepper' - obviously, spelling was still way off, so I figured he won't be an English teacher.

I asked about his favorite toy. He wrote: 'playstashin', and of course it sounds like it when you read the letters he put together.

I asked him about his favorite breakfast food. He wrote: 'pankcakes' - just how he always pronounced it back then.

I asked him how many trees he had by the house; he listed 3 (and he was right).

I asked him how many pets he had; he listed 6, and not only was he right, but I remember we were always greeted by more 'critters' than people when we came to their home.

This year I photocopied the 'test' and sent it to him; he got a kick out of it. So, it's just wonderful to keep all the little things they write; make for us, and proudly display them for others to see and be reminded how joyful they are.

And GOD BLESS US, EVERY ONE.

You have some very lovely grandchildren Jo. They are truly a blessing.

I don't get to spend as much time as I would like to with mine, but I am always amazed at their social growth. I had purchased some "Santa" letters at a gift shop that was closing and took them for the little ones on my trip up last week. Since we were staying at Gavin's home, he wanted to prepare his list and letter while I was there. He is in first grade and his mom and I helped him sound out the words he wanted to write. He carefully considered the questions and admitted that he had not always been good, but felt that he had been good more than he had been bad. The form letter had a space for him to write in what he was most proud of doing during this past year and he put "being respectful". He is, too. And I am so proud of him.

Very sweet. Remembering the true nature of this season is what it is all about.

Your grandchildren are incredibly nice children, but that is not surprising. I love that their focus is more on giving than getting, but that they retain enough childlike hope to want stuff too. I know they've been through a lot of big changes lately and will continue to do so, but my wish for them is an altogether beautiful Christmas and a most wondrous New Year.