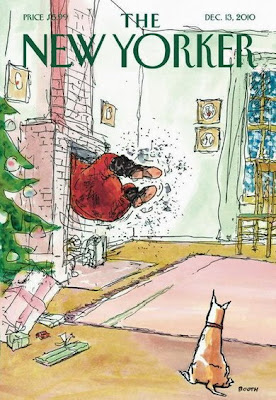 I was so happy when I picked up my latest New Yorker magazine, and saw that the cover was by my favourite cartoonist, George Booth. I recognized his style immediately, especially the Booth dog dawg.  I am George Booth's biggest fan.  He sees everything exactly the same way I do.  The description of his work is quoted as: In a doodler's style, his cartoons feature everymen beset by modern complexity, goofballs perplexing their spouses, cats, and very often a fat dog. One signature element is a ceiling light bulb on a cord pulled out of vertical by another cord attached to an electrical appliance such as a toaster. I have always thought that if ever I get another dog, it definitely will be a Booth dawg. Here are a few of my favourite Booth cartoons. 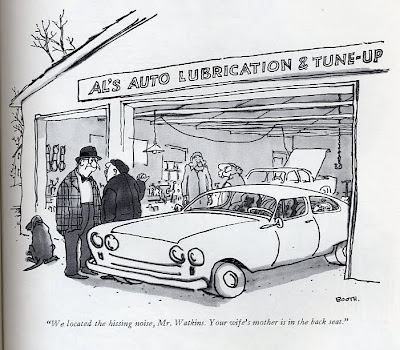 "We located the hissing noise, Mr. Watkins.  Your wife's mother is in the back seat." 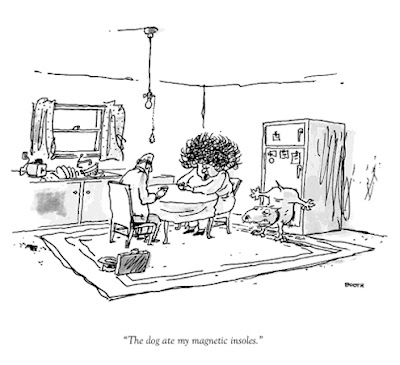 "The dog ate my magnetic insoles." 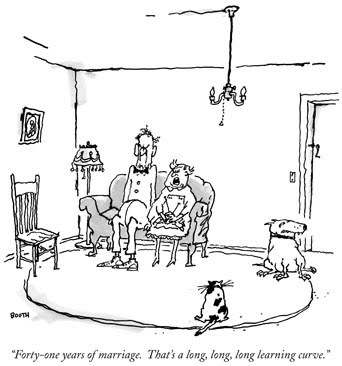 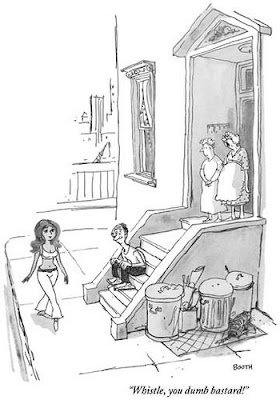 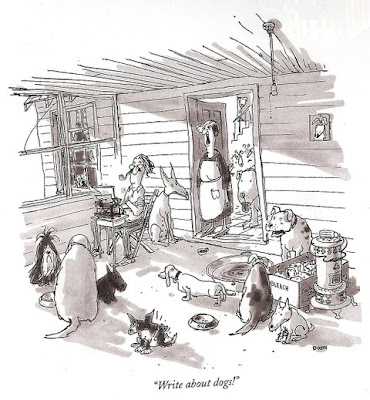 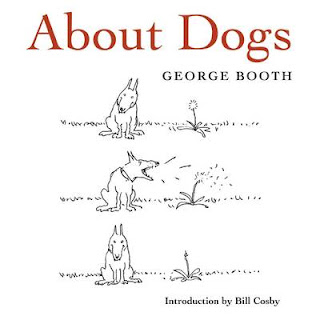 George Booth did write a book about dogs, and he also wrote another wonderful cartoon book called "Think Good Thoughts About a Pussycat", of which I still have a copy.  I was once asked if I had a choice of seven people I would like to meet and have a conversation with, who would they be.  At the top of my list was George Booth.  He has the most wonderful sense of irony, and sense of the ridiculous.  He teaches us that, for all its seriousness, life is really just a lot of fun, as long as we are able to keep our eyes open for the hilarity.
Posted by Jo at 8:55 PM

My, now that was fun - love his cartoons too, and you picked some of the 'goodies'.

I used to do a lot of cartoons of high school friends; they always loved it. I got to make posters and illustrations for the school newsletter - very fun.

I was always happy to have been blessed with the musical talent as well as the artistic talent.

I could write poems; illustrate them - turn them into lyrics and sing them while I played the piano to them.

It's like being 'self-contained'; I didn't have to rely on anyone to properly interpret what I was trying to 'say' (or sing).

You also have many talents and I so enjoy reading your blog. I don't always comment because you often summarize your post so well, there's no need to add anything to it.

Happy holidays - to the cartoonists of the world who make us laugh - cheers!!! Diane

that's the tick, isn't it? To keep our eyes out for the amusing.

You are right: George Booth is amazingly talented in seeing the world through the lens of lighthearted hilarity. I haven't been very aware of his work but now I will seek it out! Thanks, Jo! Oh, and for the smiles this morning...

These are great cartoons. I was laughing out loud (really - LOL!) at the magnetic insert one. Poor puppy!

I might not have recognized the name but I do recognize the style. I do like his stuff quite a lot.

Thanks for the giggles Jo! I particularly enjoyed the "The dog ate my magnetic insoles." LOL!

LOLZZZz the cartoon strips are hillarious... i am going to check out more of his work

Yes he is very good

oh those were great. A perfect ending for a day when all the political news was bad.

Oh, the cartoons are wonderful! This post reminded me of how much I used to enjoy reading the New Yorker when I was working in a medical library in Houston. We had copies of it in our break/lunch room. Loved it, I want to subscribe.

What a fun site. George Booth is the funniest man on the planet. I wish you could post the one of the small girl schooling her brother, while holding a cat in a stranglehold, "All you really need in life is the love of a good cat." I LOVE her little bossy-pants face.

What a fun site. George Booth is the funniest man on the planet. I wish you could post the one of the small girl schooling her brother, while holding a cat in a stranglehold, "All you really need in life is the love of a good cat." I LOVE her little bossy-pants face.