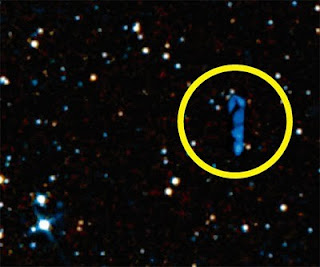 As if we don't have enough to worry about on our own planet, it appears that we are about to be visited by strangers from somewhere else. The latest goofball buzz news is that there are three objects flying towards earth.  The ETA of this UFO?  Well, you guessed it, mid-December 2012.  And of course, as with all good hoaxes, NASA is trying to "conceal this important information".  The "press release" was so badly written, I don't even want to reprint any of it here.

When I was a little girl, stuff like this used to terrify me.  The world was always "coming to an end" for one reason or another.  Even in church, at the end of the holy trinity, we would say, "world without end, amen".  The end of the world seemed to be a recurrent theme throughout my childhood.  And then the Cuban Missile Crisis happened, and I got mad.  Enough of the end of the world bullsh*t nonsense.

Why do we enjoy terrifying ourselves so much?   Come on everyone, get a grip.  What this thing really looks like is a piece of an insect that got stuck on the telescope lens.  E.T. go home...

December 2012? The real Santa is coming and he's P Oed about the false santa that's been stealing his thunder.

Hmm a bit scary it is all right, though I am more intrigued to meet em than be scared.

Must be a campaign for a new product or service brewing in the ether.

Although I'm a bit skeptical about this particular prediction, I suppose anything is possible. Since I personally know several people who claim to have been abducted, I try to keep an open mind on this subject.

However, I think now it is from a rerun of The Outer Limits!

Or, maybe as you said, an insect that got smashed on the camera lens.

I am sure I will hear people talking about on Coast to Coast AM -- the late night show that deals with the paranormal, space aliens, conspiracies and other such things!

Still .... I think it is a HUGE blue rabbit. Really, I do. I hope we have big enough carrots for it. Or them.

As long as the earth endures, seed time and harvest, cold and heat, summer and winter, day and night will never cease. Gen 8:22

The key word is endures. We it seems do not need much help in that destruction thing especially from giant blue bunnies.


Jo I got it on the last post, but like June(and I agreed with) said civility is a learned trait and we as a generation have it seemed failed to pass along civility as a common action to our children. Though there are exceptions to that I am maybe using too broad a brush.

One wonders why we need to make up things to be scared of, there's enough real stuff to scare me half to death!

If we have to listen to this for another two years we are going to wish that it was true...

Well its either a bug or a smudge. I love how people don't ever want to except the most logical conclusion.

Why would anyone think NASA would be able to keep that kind of secret?

If the super volcano at Yellowstone erupts it will be enough to destroy most life on Earth. There have been more earthquakes than usual in the area lately. Earthquakes are often early warning signs of an eruption. And the ground level is rising. Another warning.

Asteroids, plagues, Armageddon, it's always something.

It sounds like a variation on the Mayan Prophesies. I think it would be fascinating if we actually were visited by beings from other planets -- why assume that they would be hostile? How exciting if they were more advanced than we are, and could teach us things.

Remember the Y2K scare, how our computers would crap out? That didn't happen either!

Guess I'm the only a survivable human from the Cuban missile...even the 2012's ??? Thanks for the great news...

i guess we never outgrow the fun of
being scared . . . ghost stories around
the campfire, sneaking up to your
sister's bed, imagining scary ufo's
approaching earth.

thank you for your prayers for my
friend's missing son . . . day 5.

Oh puhleeze!!!! It looks like a cotton ball that got caught in the cross hairs.

Any civilization advanced enough to traverse our galaxy certainly has mastered "warp speed," and could manage to get here before mid December 2012.

I don't know about you Jo, but come the winter solstice 2012, I'm going to be toasting the world with champagne and be glad that there are some disillusioned and disappointed folks out there.

Movies like Skyline and Battle LA probably adds to the hype.