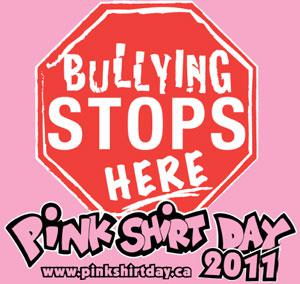 Today is Pink Shirt Day here in Canada. The idea is that everyone wears a pink T-shirt to school, to bring an awareness to bullying. It was initiated four years ago, after a student in Nova Scotia was bullied for wearing a pink shirt on the first day of school, and now the initiative has taken off across the country -- and none too soon. Bullying has become completely out of hand, especially with all the various social networking sites available to kids. Recently there was a school here in Vancouver where a group of kids had a Facebook contest for the "ugliest girl in school". The loser (winner?) of the contest not only dropped out of that school, she dropped out of school altogether. She is 13 years old. Middle school girls are notoriously the worst bullies of all, and every school has more than its share of "mean girls". 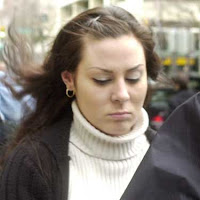 A few years ago a 14 year-old girl in Victoria was bullied to death by her tormenter. The young lady in this picture boasted to her friends that she put her foot on another girl's head, as she lay immersed in the water, and smoked a cigarette until her victim no longer moved.  The young lady ended up in jail. If the situation had been dealt with quickly, two young lives would have been spared.  I felt very sad for both of the girls;  they were both victims.

When I was in school -- back when the dinosaurs roamed the earth -- bullying was not tolerated, either by teachers or by parents. Teachers had the power to deal with bullies swiftly and efficiently.  Often just the possibility of such a consequence was enough to stop the bullies in their tracks.  Now there are no repercussions for bullying, and it is escalating.

No one wants to deal with bullies, and that includes workplace bullies.  Our organization has an initiative called "Respectful Workplace", but there really is no recourse for someone who is being bullied.  We had a manager who was a bully, and I nicknamed her "The Black Widow Spider".  She always wore black, and she sat in her office with the lights off, waiting to pounce on her next victim.  Nothing was done about her, and when she retired it was as if a black cloud had lifted from the building.

Bullying is not acceptable in any form, and the folks in authority in schools and workplaces need to stop being intimidated by bullies.  Wear your pink T-shirt today, and stop the bullying...
Posted by Jo at 8:11 AM

Blogger is down, it seems. I can't respond to ANY posts, so this will probably not go through. I will put on my pink shirt right now!

How on earth did bullying become so common? I had a workplace bully too. When I left work a large weight was lifted. Now I don't have to tolerate bullies. It feels very, very good.

Stepping on someone's head while immersed under water until they aren't moving is not bullying - it is called murder. That is uncalled for.

Kids are too sensitive these days. Really. Social media was called the telephone and hand written notes back in the day. I was bullied in school for being fat, because my parents divorced and mother began dating a local business man and once because I got a really bad perm and was dubbed Betty Boop for my remaining years in junior and high school. It hurt but I kept on going. I didn't get into the fetal position in the closet or hurt others because of it.

In our attepmt to progress,make more nmoney, have a bigger TV, I feel, we have forgotten basic values.. Our children are an example of this.. Teaching personal strength seems to have become a nonexistant lesson in the year 2011, for noone with personal strenth bullys and or allows a bully to rule them. We have dropped very important lesson for our children.. God Bless our kids for WE the adults are truly the example.

What a wonderful idea. Pink is usually the symbol of breast cancer awareness here in America, but I think we need a color for Bully Awareness here, too.

It is a mark against our societies that we allow these kinds of things to continue to happen.

There is absolutely no place for bullies in society.

Liberalism everywhere with its emphasis on complete child and individual freedom has invaded the educational system damaging basic values and discipline.

I'm afraid no pink shirt could turn the wheel backwards; it's going to be worse.

It will need much more than a pink-shirt day to quell the rise of the bully boys and girls.

Our laws prevent physical intervention in bullying in schools and thus this nasty side of children has grown and keeps on growing. How to stop it? Wish I knew.

Public humiliation of anybody found guilty of bullying might be worth a try. For schoolkids, put the guilty party in the stocks and let the rest of the school mock him/her; maybe splatter with rotten fruit and veg? That's what I'd like to try, but it will never come about.

Too many 'human rights' to protect the guilty and sod the victims.

Ooh - I like Philip's idea! I remember in high school my english teacher (who also happened to be my uncle) got so annoyed by an obnoxious bully that he took him by the ear & dragged him out into the hallway to have a talk with him. And it was a talk, not a paddling. Jack had calmed down considerably when he came back to class. But I'm not sure it really helped - just sent him underground.

The internet gives bullies a much wider audience. Go to any popular site with more than a few comments and you'll find a bully.

we are preaching the same sermon today! Bless you

This is a great post. An eye opener to all. Very good job.

Thanks for sharing this to us.

There have always been bullies. Some of them chased my friend home from school every day and beat her up for being Jewish, and others have destroyed indigenous cultures in the name of religion, or because they had good land. Some people are simply more aggressive and unprincipled than others, and while we should try to protect their victims, we will never banish bullying completely because sadly, it is part of human nature.

I was not aware of "Pink Shirt Day" - it's a marvelous initiative. Not enough is done these days to raise awareness and prevent bullying. Thanks for sharing Jan.

There’s nothing good in bullying. It will never be right, and no reason would be enough to make it acceptable. We should work together in addressing this bullying problem instead of just ignoring it. Collective effort will surely minimize if not eliminate cases of bullying.

Bullying is indeed getting out of hand nowadays. From school to workplace, and for some it even started in their own homes. I'm suddenly jealous of my grandparents, because in their generation bullying is not even a known word. Anyway, this is a great advocacy against bullying and an eye-opener for all that they have to pay the consequences of their own actions.